On 1 February 2021 the same military institution which for decades ruled over Burma with an iron grip seized power and detained the democratically elected leaders, political activists and many others who resisted dictatorship. The population does not recognize the junta regime, protest demonstrations and the civil disobedience movement have engulfed Burma.

The Committee Representing the Union Parliament (CRPH) was established on 5 February by elected representatives of the Pyidaungsu Hluttaw. The CRPH is Burma’s legitimate parliament and must be recognized as such by the entire international community.

The attempted coup was primarily carried out because of the ego of some top military leaders. The military believes it is their natural right to control the country, a historical legacy led them to believing they built Burma from the ruins of the second world war and colonialism and are the defenders of our sovereignty against external and internal nationalities.

It is not about election irregularities and the attempted coup is unconstitutional according to the 2008 Constitution drafted by the military for their own benefit and control of the country. The unsubstantiated allegations of voter fraud are not even a sufficient factual basis to enact a state of emergency. According to Section 40(c) there must be threat to disintegration of union, disintegration of national solidarity or loss of sovereignty. In addition to this, a state of emergency must be called by the acting President, U Win Myint was arbitrarily detained, not vice-President Myint Swe. Thus, there were no grounds for declaring a state of emergency and only the legitimate President can do so. It is a violation of their own constitution.

The very first demonstration began in Mandalay on 4 February and has spread everywhere, protests have only not occurred in small pockets and primarily because of pre-existing destruction by the military or because of heavy presence of military bases, for instance in some Townships in Rakhine, Shan, and Kachin States. Hundreds of thousands of people took part in the 2222 uprising on the 22 February and almost all shops were closed.

A critical dimension to the 2021 uprising is the youth generation, there is not one leader the military can detain, it is a leaderless, fluid, an organic rejection of dictatorship. In many towns, unions and student bodies have taken a leading role in the protesting movement, including the All-Burma Students Federation Union, All Labor union, teachers’ union, some unions, organization and activist leaders are taking a leading role.

But all demonstrations are being collectively commanded by the people themselves. 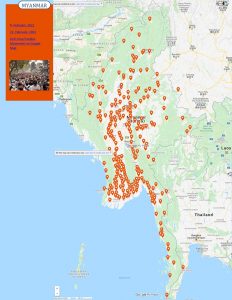 Map of Protests in Burma 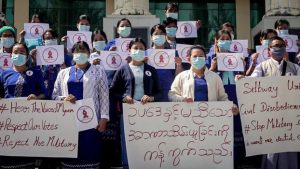 The civil disobedience movement is a coordinated effort of civil servants, including teachers, health workers, police, and more, as well as private business staff such as bankers to forgo work until this junta regime hands back power to the elected government. The aim is to bring the government and the economy to a standstill, to demonstrate the military’s lack of legitimacy and that the junta cannot govern, the key tenants are no  recognition, no participation. The civil disobedience movement, or CDM, has become so powerful that the military has resorted to even more arbitrary detentions and brutal crackdowns to assert control.

By the end of February 2021, 1132 individuals had been detained or charged in relation to the junta attempted coup on 1 February. AAPP does not recognize and will not cooperate with the illegitimate coup regime, and like the Special Envoy regards it is an attempted coup because it has not successfully seized power, the people are not cooperating and rejecting its authority over them. 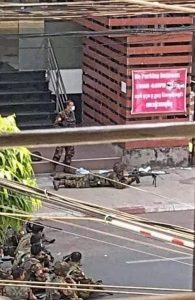 Initially the military detained the democratically elected government 127 Government and MPs were detained on 1 February at the onset of the coup. In addition to 45 NLD members, this was the first stage in the junta’s attempt to seize power. Detentions continued against civil society activists every day until the next wave of arrests on 10 February, when 103 Union Election Commission members were detained by the junta regime. Unsubstantiated claims of election irregularities by the military were the reason for these detentions, illegal detentions to justify a coup. Thereafter civilians and civil servants were increasingly arrested as crackdowns on the peaceful civil disobedience movement grew. 26 civilians and civil servants on the 20th, 59 civilians and civil servants on the 27th, until ‘Bloody Sunday’ when 208 were detained and identified, but AAPP understood at least 1000 had been arbitrarily arrested by the junta regime. 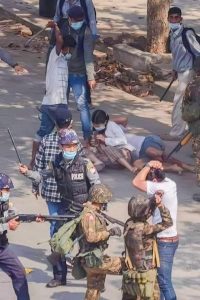 Many of the detained are in undisclosed locations, and when AAPP has identified the prison of military barracks it has been from our sources or media, not the junta regime. These enforced disappearances and arbitrary detentions are illegal under international law. It is a particular cause of concern for AAPP knowing the human rights violations which occur in Burma’s prisons and detention centers, pre-existing health conditions will be neglected. AAPP has done extensive work on the dire conditions in Burma’s prisons. Please see previous reports on “Prison Conditions in Burma and The Potential for Prison Reform” and “The Systematic use of Torture by Totalitarian Regimes in Burma & the Experiences of Political Prisoners”. Most recently we visited prisons and labor camps in response to the COVID-19 outbreak where we confirmed through research and discussions with prison officials the chronic level of overcrowding and neglected healthcare facilities throughout the country.

Note: this graph regards re-arrests of a handful of detainees as ‘additional arrests’, hence the cumulative total will be more than the AAPP detainee list. This graph uses our data from the 3 March lists, as reports of detentions from February may be confirmed some days after. 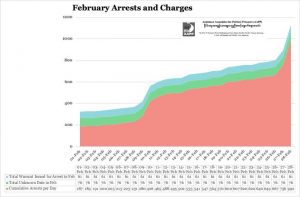 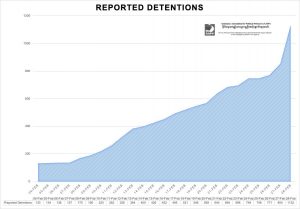 Water cannons, rubber bullets, slingshots, batons, live ammunition, some snipers, flash bangs, and tear gas are all being methodologically employed by the military and police against peaceful protestors. On 9 February police violently cracked down in Naypyidaw at around 12:30pm and 19-year-old student Ma Mya Thwet Thwet Khaing was shot in her head with live ammunition and later died on 19 February. 4 people including a reporter were wounded on 9 February. These heroes defended democracy with their lives and were honoured by the people for this. 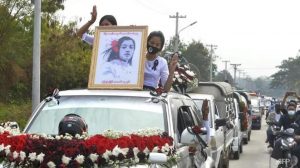 Photographs and videos have circulated showing unarmed detained females and humanitarian volunteers being viciously assaulted with batons, children are also being severely injured by military projectiles. In the month of February, approximately 30 people were killed in crackdowns against peaceful protestors, some were unarmed civilians not involved in the demonstrations, and many shot in the back or head trying to run for cover. Burma’s Bloody Sunday (28/02) was the deadliest in the month with at least 17 fatal casualties. It is crucial to note that military and police violence is intentional not coincidental, it is methodological terror, shooting to kill. The military wants to control the country, but people in Burma long for true democracy and are fighting against this attempted coup in every 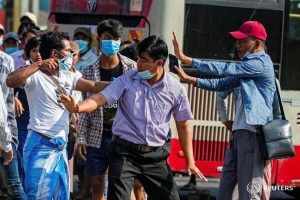 The military are violently suppressing peaceful protestors because they recognize how effective a civil disobedience movement which everyone is involved with has been in bringing the county’s economy and attempted governance to a grinding halt. But the military wants to control the country at any cost. Battalions, military personnel in police uniform, and pro-junta thugs sponsored by the USDP are operating the crackdowns. The military junta also pardoned prisoners in an amnesty to create anarchy and sabotage communities, they intentionally used some released prisoners to arson property and poison water supplies to ravage peoples’ lives. In the face of this state sponsored terrorism, demonstrations have remained peaceful. Respect and admiration for those killed in the crackdowns on display on the mass peaceful marches for the fallen heroes of the democracy movement Light Infantry Battalion 33 was spotted in Mandalay and Light Infantry Battalion 77 and 22 in Yangon during February. Although pro-junta thugs were found across the country, most were concentrated in the Yangon area. Police and military in police uniform are involved in crackdowns across the country.

The military’s ‘clearance operations’ have indiscriminately targeted people living in ethnic states for decades, we hence know from past actions the military’s disregard for human life. AAPP has monitored human rights violations including torture, deadly assaults, and mass displacents of civilians in Arakan State, Shan State and all other ethnic states, the military has brought its strategies from these conflict zones to peaceful protestors, they are trying to make entire Burma a warzone between democracy and authoritarian rule, but it is a masscare not combat. 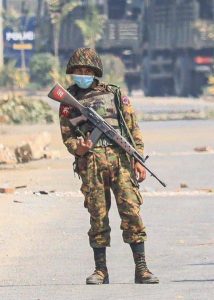 The regional response has been muted, but international condemnation has been swift but diplomatic intervention has not been effectively used. A UN Security Council unanimous statement on 4 February announced, “deep concern” of the attempted coup and called for the “immediate release of the country’s elected leader, Daw Aung San Suu Kyi, and President U Win Myint”. The Human Rights Council emergency meeting on 12 February continued this trend. At the UN General Assembly an informal meeting was more significant for its substance when the Special Envoy denounced the “illegitimate coup” whilst regional countries and Russia and China hid behind talk of the attempted coup being an internal affair even though it affects the peace and security of the entire region. The UN Ambassador Kyaw Myo Tun in a heroic display supported the democratically elected government  and called on the international community to denounce the junta regime. At the end of an emotional speech the ambassador gave the three-fingered salute for democracy. The junta regime has attempted to dismiss the ambassador but just as with the 24 February junta foreign minister meeting with ASEAN counterpart, it lacks legitimacy.

Civil war reignited in Kachin and Karen State, displacement and shelling is once again affecting the civilian ethnic populations but also the peace and security of the entire region. On 20 February the EAO National Ceasefire Agreement signatories unanimously rejected the coup, support CDM and protest movement, and condemned the violent crackdowns.  The rule of law Burma’s democratic transition had hoped to enshrine has severely regressed, but the situation will only deteriorate further if this attempted coup is not brought to an end.

AAPPs demands for the international community: