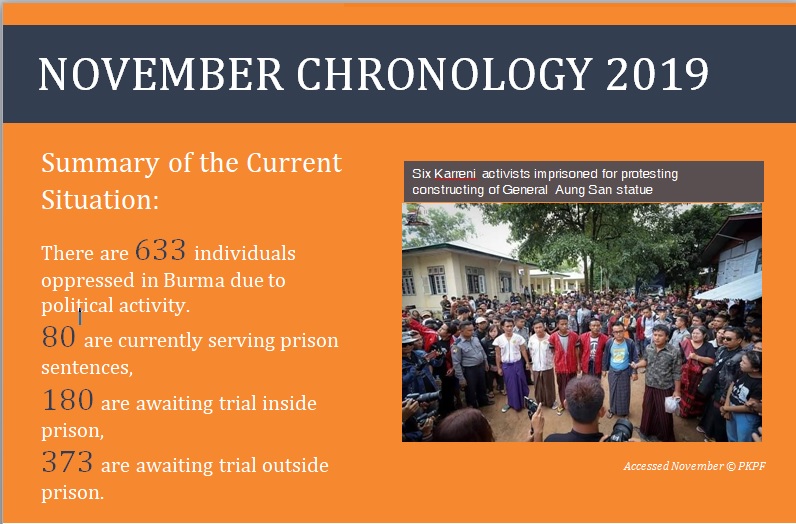 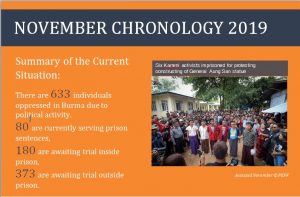 Month in Review for November

The freedom of expression act is one of the most fundamental rights that contributes to strengthening democracy. Nonetheless, the continued arrest, lawsuit, and penalties of activists, workers, and civilians are meant to silence the freedom of expression. Furthermore, Peaceful Assembly and Peaceful Procession Act, the Law on the Protection of Personal Freedom and Personal Security of Citizens, Article 500 of the Penal Code, and Article 505 of the Penal Code (a) threaten the human rights of citizens. Instead of the government reviewing these requests by civilians and implementing their demands, the governments repressive their arrests, lawsuits, and penalties are damaging to the country. If these arrests continue, there will also be no positive progress in national reconciliation. Therefore, the government needs to respect the fundamental rights of all its citizens to freedom of expression.

The human rights abuses that continue alongside the ongoing conflicts in Burma are spreading an atmosphere of fear in society. The human rights situation in Burma is significantly below international standards due to lack of taken against these violations, the failure to sign the international Code of Conduct, and the lack of implementation of treaties.

In November, fighting between the Burmese military and ethnic armed groups continued to rage in ethnic areas. In particular, the local people are facing severe consequences for the fighting in Rakhine State.Thirty-six Arakanese people from Mrauk-U Township, Myebon Township, Kyauktaw Township, Ann Township, Minbya Township in Arakan State, were arrested in November on suspicion of being members of the Arakan Army (AA). 14 of them were charged under Section 50 of the Anti-Terrorism Law (a),  (b) and (d) or 52 (a). Besides, Shwe Than, the owner of Shwe Nadi Speed Boat, and six crew members were charged under section 365 of the penal code in October. In September, the Buddisht monk, U Kawi daza, from O Htain Village, and Wai Soe Htun, O Htain Village Administrator, were charged under section 50 of Anti-Terrorism Law. Additionally, Thein Aung Myat, Yat Kita calender publisher, and four other civilians were sentenced to two year imprisonment under section 17 (1) of the Unlawful Association Act.

The events above show how poor the human rights situation in Myanmar is. In 2011 and 2015, Geneva-based Universal Periodic Review (UPR) analysed the Human Rights practices of Burma. In both of those reviews, Burma committed to sign oppose the persecution of the law in order to protect those in any form of detention or imprisonment; the United Nations Convention on the Rights of the Child (UNCAT), and the Citizenship and Political Convention  (ICCPR), including major international treaties on human rights.

However, since then Myanmar failed to follow through with its obligations. Therefore we continue to call on the government to amend or repeal the repressive laws as soon as possible, signing of international treaties, immediate action against perpetrators, and enacting a law that compensates all victims of abuse, including promoting human rights situation at earliest convenience.

Although the government established a Central Committee for the Review of Land Confiscation to accelerate the resolution of land issues, there are still numerous delays in addressing land issues. As a result, farmers and indigenous people are still demanding and fighting for the return of their confiscated land. The following are some of the demands for land issues during November.

When farmers loss of their farmlands, it negatively the whole country as Burma’s economy is based on agriculture. Therefore, to promote the interest of farmers and land sector, we encourage the government to take action as soon as possible for the land confiscation and disputes.