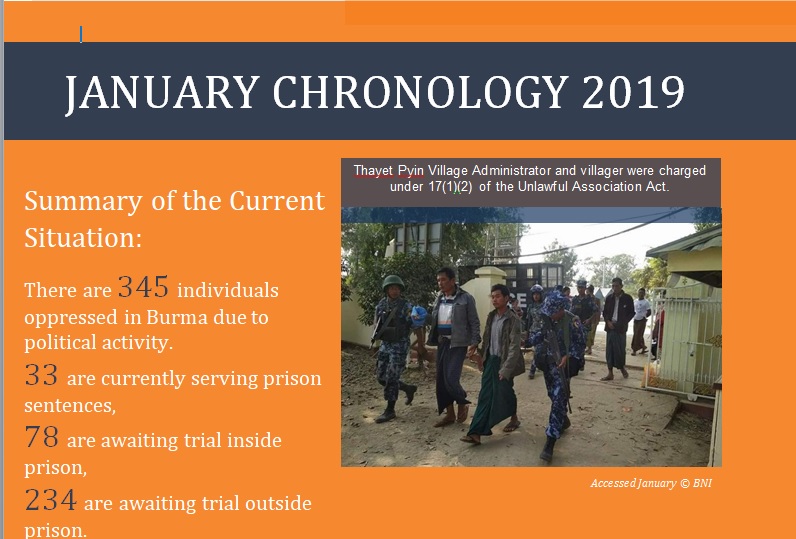 The clashes between the military and the Arakan Army (AA) have worsened in January, leading to local Arakanese people being arrested, charged and tortured over suspicions of association with the armed group, which has not signed the NCA. This has been a challenge to the basic sectors of governance with village administrators submitting letters of resignations due to the arrests and charges. Even worse, indigenous people have been used as human shields in clashes between military and ethnic armed groups (EAGs). The following incidents that occurred in January illustrate the impact of the armed clashes in various townships:

In areas embroiled with conflict between the military and ethnic armed groups, both state and non-state actors should be held accountable for their actions and take into consideration the safety and wellbeing of local populations affected. Oppressive laws and the Government’s failure to sign international treaties violate basic human rights through actions such as arbitrary arrest and detention. Meanwhile, EAGs continue to participate in arrests, forced recruitments, and extortion that negatively impact the lives of local populations. In both cases, civilians have become caught in the crossfires of the military and EAGs and their perpetrators have largely been exempt from punishment. The Government must revoke vague and repressive laws such as the Unlawful Associations Act and enact a Reparation Law and Victim Law in order to provide remedial programs to rectify the losses of victims. Whereas, EAGs must recognize that they must adhere to minimum protection of non-combatants and, in all circumstances, treat them humanely in accordance with Common Article 3 of the Geneva Convention, which has been ratified by Burma.

Prison is one of the sectors in need of urgent reform. The Assistance Association for Political Prisoners (AAPP) has urged the Government time and time again to reform the prison system. AAPP published the Prison Conditions in Burma and the Potential for Prison Reform report in 2016 as well as the Prison Overcrowding and the Need for Urgent Reform report in December 2018, but prison reform continues to be delayed. According to Yu Lwin Aung, member of the Myanmar National Human Rights Commission (MNHRC), inmates are in need of healthcare in the camps of Kalewa Town, Kale Town and Monywa Town, Sagaing Division and in detention centers in Myeik Township, Tanintharyi Division. These are extreme concerns and prisoners lacking access to fundamental healthcare shows the lack of respect and protection for the rights of citizens. Principle 367 of the 2008 Constitution stipulates that every citizen shall, in accordance with the health policy laid down by the Union, have the right to health care. Moreover, Article 25 (1) of the Standard Minimum Rules for the Treatment of Prisoners (SMRs) enacts that the medical officer shall have the care of the physical and mental health of the prisoners and should daily see all sick prisoners, all who complain of illness, and any prisoner to whom his attention is specially directed. Therefore, AAPP urges the Government to implement the necessary policies to ensure all citizens, even those incarcerated, are provided with adequate provisions of healthcare.

One factor behind the lack of healthcare is connected to prison overcrowding. In 2017, MNHRC finished checking 26 prisons and 25 labour camps in Burma before reporting what they had found to the President, including regarding prison overcrowding. In 2018, MNHRC checked more than 90 camps and prisons in the whole country and found out that some prisons are holding more inmates than twice its capacities, according to Yu Lwin Aung.  The commission has been planning to send a report to the President regarding how to deal with the overcrowding situation. MNHRC found that Myitkyina, Nyaungshwe and Lashio prisons are holding more than twice their capacity of inmates and other prisons, including that Mandalay, Mohnyin and Insein prisons, are also holding more prisoners than their official capacities. For more information on prison overcrowding see our 2018 report mentioned above.

The MNHRC found that the issue of overcrowding has still not been solved. If you want to measure a country’s human rights standard, you can look at the prison conditions of that country. With this in mind, AAPP calls for the Government to establish a prison system based on international human rights standards to alleviate the numerous human rights violations happening within Burma’s prisons.

In January, the Bicameral Union Parliament has agreed continue the formation of a committee to propose amendments to the constitution despite disagreement from a military lawmaker. AAPP welcomes this new step in order allow alterations to the 2008 Charter so that the constitution can align more closely with human right standards. Additionally, according to  Defence Services C-in-C Senior Gen. Min Aung Hlaing, “We have agreed to amend it before the tenure of the first government,” on January 31. Therefore,  AAPP calls for MPs who are involved in key roles of the legislative sector to cooperate in the amendment of the 2008 Charter.

Land issues illustrates that the economic, social and cultural rights of farmers continue to be violated in Burma. These following cases have occurred in January.

By looking at these cases, it can be seen that issues of land confiscations, which were seized by authorities and military, have not yet been resolved. This is not only a challenge in the transitional process, but also a loss for farmers who earn their livelihood by cultivating. Thus, AAPP suggests the Government to sign the International Covenant on Civil and Political Rights (ICCPR) and to comply with the International Covenant on Economic, Social and Cultural Rights, which it has signed already, by looking forward at the interests of the rights of farmers.