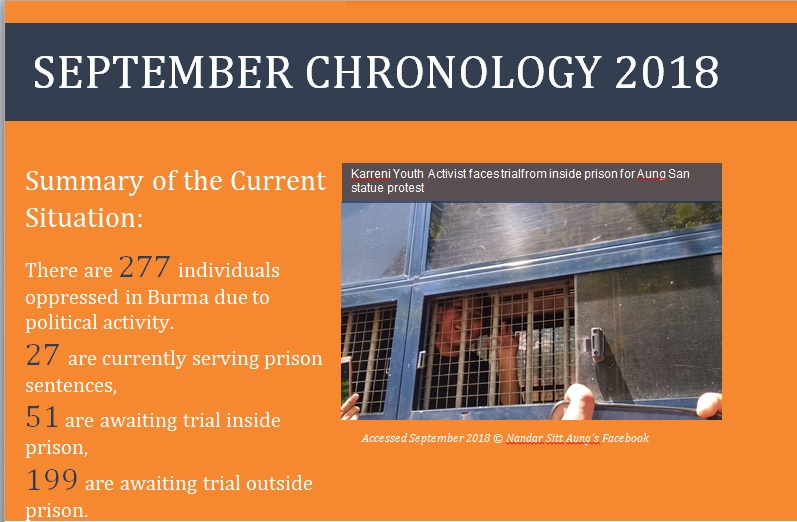 September 18 marked the 11th anniversary of the Saffron Revolution and it’s memories of arbitrary arrests, detentions and sentencings. The Saffron Revolution was a resistance movement against the repressive military regime and was a critical step towards democracy in Burma. However, 11 years since the Saffron Revolution, political activists, journalists, farmers and those who speak about against human rights abuses continue to face threats, restrictions, and curtailments of their rights.

Restriction on Freedom of Expression

The freedom of press is waning under the civilian Government. On September 3, two Reuters reporters, Wa Lone and Kyaw Soe Oo were sentenced to seven years under the Official Secrets Act. A surge in international condemnation followed. US Vice President Mike Pence has been the most senior US official to call for their immediate release. UN Secretary General, Antonio Guterres also condemned the trial and sentencing, telling reporters that “it is my deep belief that that should not happen and I hope that the government will be able to provide a pardon to release them as quickly as possible.” Having visited Burma on September 19 for two days, UK Foreign Secretary Jeremy Hunt, raised the issue with the State Counsellor, making it known he was “concerned that due process may not have been followed and wanted to protect freedom of expression everywhere”. Their conviction is a dark day for freedom of the press. AAPP calls on the government to implement improvements in press freedom by immediately releasing all journalists, including the two Reuters reporters.

It is not just journalists who have been targeted.  The following cases are evidence that freedom of expression is under attack from a number of repressive laws.

These cases highlight the implications of continuing to use repressive legislation, such as PAPPL and the Unlawful Association Act. The colonial era Unlawful Association Act is continuingly being used to oppress the human rights off people across the country, particularly people from ethnic minorities, as in the case of the two villagers from Kachin State. The Act, which was enacted 110 years ago continues to threaten the freedom of movement and security of ethnic people and has a 100% conviction rate. As of the end of September, Six people have been sentenced, 18 are facing trial inside prison and five people have been facing trail outside prison under this law.

In liberal democratic nations, freedom of expression is protected and permission to hold peaceful demonstrations is not required. Therefore, the Government has to immediately release the people unfairly detained. AAPP calls on the Government to review and amend oppressive laws such as the PAPPL and Penal Code, in order to protect its citizens.

The Government and Military have a responsibility to protect and preserve the human rights of citizens, yet the above cases show how they have failed.  These continued arbitrary arrests and detentions are therefore step backwards for the country, AAPP continues to urge the Government to repeal the Unlawful Association Act and confirm the signing of the ICCPR.

In addition this, it must be highlighted that there are also severe restrictions on civil and political rights for ethnic people as a result of the conflict between Ethnic Armed Groups (EAGs) and the Military.  On September 3rd the TNLA announced it had put on trial a Shan women, Nang Mo Hom, who was abducted at gunpoint from her home in Namkham Township, Northern Shan State. The TNLA has said that Nang Mo Hom is being tried in the TNLA central court for “allegedly” obstructing its troops as they performed their duties. AAPP is very concerned with this announcement and is disappointed with this the arbitrary arrest. Therefore, AAPP published a statement on the arrest of Nang Mo Hom, calling on the TNLA to immediately release Nang Mo Hom, marking a step towards peace.

Lawyer Khin Khin Kyaw and activist Than Htike were sentenced to six months imprisonment under Section 228 of the Penal Code this month. The trial proved without doubt that Burma’s judiciary needs to be reformed. Their case took three years and over 70 hearings to come to conclusion. Khin Khin Kyaw and Than Htike were representing the legal interests of the detained student protestors who participated in protests in Letpadan against Burma’s Education Law.

From this and other cases Burma’s judicial sector can clearly be seen to be regressing. It is questionable why justice was not able to be dispensed from such a long lasting trial, which ran from 2015-18. Moreover, according to the Washington-based World Justice Project’s 2017-2018 report, Burma ranked 100 out of 113 countries globally and 14 among the 15 countries in the East Asia and Pacific region. Serious corruption in the legislature, executive branch, police, Military and judiciary contributed to the low ranking according to the report. Despite the civilian Government election manifesto that “a fair and without bias legal system will be implement” this has not been implemented. As long as the judiciary sector is not reformed citizens will continue to face threats as judiciary encompasses in the country’s three major sectors. Therefore, AAPP calls on the government to reform the judiciary sector immediately.

Land disputes have remained mostly unresolved, although in September the State did return some confiscated land. Protests also continued regarding other land confiscated by the Military, and over the threats that some residents have endured.

The farmland sector produces key products as well as providing a vital business role for the country. If farmers continue to face prejudice, the farmland sector will be negatively impacted. President U Win Myint directed the State and Division Governments to conclude their investigation regarding confiscated land before December 31. AAPP urges the government to immediately handle the issue of land confiscations in Burma.