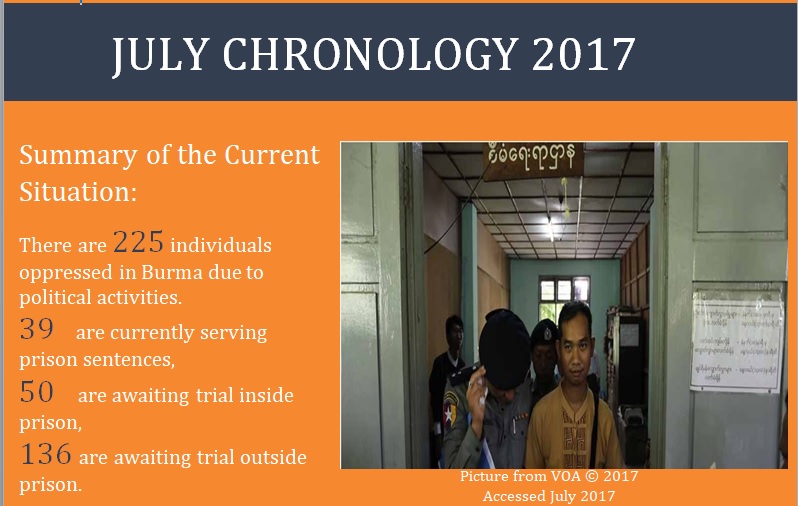 In July, Burma continued to experience an increase in restrictions on media freedom and the further persecution of journalists, through the use of outdated and repressive laws, adding another journalist to a tally of five in the past two months that have been detained. Despite calls both nationally and internationally for their release, journalists Aye Naing, Pyae Phone Aung, and Lawi Weng along with the three civilians Mai Tun Aye, Mai San Nyunt, and Mai Aung Kham were arrested by the Military in June while returning from a Ta’ang National Liberation Army (TNLA) initiated drug destroying ceremony in Shan State, remain detained during their ongoing trial.  The three journalists and three civilians were detained by the Military and charged under the Section 17/1 of the Unlawful Associations Act for having “associated” with the TNLA, an ethnic armed group (EAG) the Government deems illegal. The group of six attended three hearings at the Hsipaw Township court in July two of which were unexpectedly rescheduled by the presiding magistrate. Their second court appearance occurred on July 18, when the detainees were spontaneously summoned to the Hsipaw Township Court for an impromptu hearing, without their legal counsel present, three days ahead of their scheduled appointment.
Their detention and trial is not only exemplary of the ongoing persecution of journalists and the explicit use of outdated and repressive laws to suppress the media, but also serves a reminder of the blatant lack of judicial transparency in Burma. Their treatment from arrest to the present day showcases violations of basic human rights and breaches of domestic and international legal protocols. Held incommunicado at an undisclosed location by military forces for more than 48 hours, they were not

remanded before a magistrate within 24 hours of their arrest, breaching Sections 60 and 61 of the Burma’s Code of Criminal Procedure, not to mention Articles 9 and 10 of the Universal Declaration of Human Rights (UDHR), enshrining the right not to be subjected to arbitrary arrest and detention and be provided a fair and public hearing by an independent and impartial tribunal. This case which has garnered the attention of the international civil society and human rights institutions, represents the broader systematic persecution of journalists and the stifling of free expression in Burma despite the transition to the civilian Government, and promises made to make significant headway in abolishing human rights abuses. This case further serves as an unfortunate indicator that the behavior of previous regimes regarding media censorship and restrictions on freedom of expression should now also be expected in this allegedly transitioning political climate, and that the promises made a year ago, are unlikely to be upheld.

On July 14, AAPP along with 67 Burmese and international civil society organizations (CSOs) released a joint statement demanding that charges against six individuals be dropped, which Amnesty International then followed up with another statement on July 27. The European Union also issued a statement condemning the incident and called on the Government to provide protection to journalists for them to carry out their work. Although media censorship laws were lifted in 2012, Section 17/1 of the 1908 Unlawful Associations Act is one law that continues to enable the persecution of journalists, stifling freedom of expression, especially on reports of sensitive issues pertaining to the democratic reform process. Burma is home to one of the longest running civil wars and it is the essential nature of the work of journalists like Aye Naing, Pyae Phone Aung and Lawi Weng to report on these issues to make Burma as well as the international community aware of current events. To prosecute them is an injustice and a mark on media freedom, doubly undermining Burma’s transition towards democracy.  The value of journalism and media freedom should be recognized, as well as human rights for all.

The recent arrests of journalists not only disregards international human rights laws but also disregards Burma’s domestic legislation. According to the Section 354 of the 2008 Constitution of the Republic of the Union of Myanmar, “Every citizen is afforded the right to express and publish their convictions and opinions freely, if not contrary to the laws protecting national security, prevalence of law and order, community peace and tranquility or public order and morality.” The journalists did nothing contrary to Section 354 of the Constitution that would warrant the deprivation of their liberty.