May Month in Review, Chronology and Current Political Prisoners List 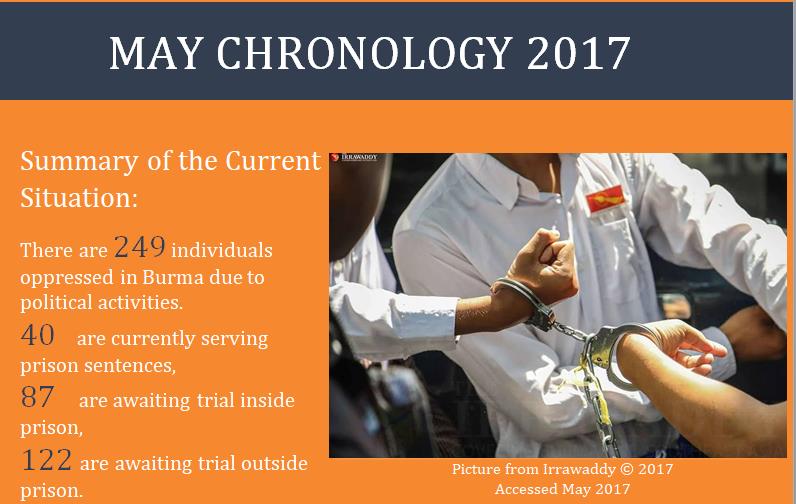 MAY CHRONOLOGY 2017
Summary of the Current Situation: There are 249 individuals oppressed in Burma due to political activities.40 are currently serving prison sentences,
87 are awaiting trial inside prison, 122 are awaiting trial outside prison.
MONTH IN REVIEW
This month, 24 people were arrested, 20 of whom are farmers, one was a labor rights activist, one land rights activist, and two individuals were arrested under Section 66(d) of the Telecommunications Law. In May, 13 people were charged, including one student under Section 19 of the Peaceful Assembly and Peaceful Procession Act (PAAPPA) ten farmers, and two civilians. There were 21 sentences in the month of May. 89 political prisoners were released, the majority who had been originally sentenced for unlawful association. 21 individuals were incarcerated in May, four individuals under Section 19 of the PAAPPA, two under Section 66(d), 14 farmers, and one labor rights activist. In May, three incarcerated political prisoners were reported to be in bad health.

In May, individuals from ethnic minorities continued to be arrested and detained on suspicion of association with ethnic armed groups (EAGs). On May 6, the two Baptist Church officials Naung Lat and Gam Seng, arrested in December 2016 in Mong Ko Township, Kachin State, under Sections 17/1 and 17/2 of the Unlawful Associations Act, were transferred from Muse Township Police Station to Lashio Prison, Northern Shan State. On May 9, the two men appeared before the Lashio Township Court, where their trial had also been transferred. As some of the ten prosecution witnesses did not come to the hearing, the trial was postponed once again. According to Mrauk-U Township Police Force, Arakan State, a warrant was issued against Arakanese youth activist Ann Thar Gyi for delivering a speech commemorating the founding of the Arakan Army on April 10. A case was filed against him by Light Infantry Battalion #540 under the Unlawful Associations Act. As this goes against the 21st Century Panglong Conference held at the end of the month, AAPP urges the government to respect the citizens’ fundamental rights to freedom of association enshrined in Article 20 of the Universal Declaration of Human Rights (UDHR) and to proceed with the reconciliation measures it has initiated with ethnic minorities. AAPP strongly recommends the government make appropriate amendments to the Unlawful Associations Act so that people are not arrested for associating with EAGs, which is often inevitable given the widespread conflict in Burma.

This month, farmers continue to be arrested and sentenced over arbitrary land confiscation disputes. On May 11, eight out of twelve farmers from Kone Mone Village and Bant Bway Village Tract in Naung Cho Township, Northern Shan State, were sentenced to one month imprisonment under Section 447 of the Penal Code and to an additional three months in prison under Section 427 of the Penal Code for trespass and mischief causing damage respectively. The defendants have been facing trial since August 2016, when businessman Soe Thein filed a complaint against them for destroying his fence. In 1992, 242 acres of lands, which were owned by the farmers, were confiscated under the military regime for implementing a coffee project. The project was however abandoned and the seized lands were instead given to businessmen. As the lands were never cultivated by the businessmen, the farmers decided to use them. On May 13, seven farmers from Dawei City, Tanintharyi Division, who prevented the Dawei Development Public Company (DDPC) from working on their lands, were arrested under Sections 447 and 427 of the Penal Code for criminal trespass and mischief. They were released the same day. The lands were confiscated by the authorities as part of the Dawei City Project Area which allowed the DDPC to build a private school on these lands. But according to one of the seven farmers Ye Htwe, the lands were seized without notice or compensation. As land grabbing issues remain unresolved, farmers try to come into contact with the authorities to argue their case. On May 9, farmers from Loikaw Township, Karenni state, contacted the State Counselor’s Office, requesting the Government to interfere with building plans of Township Officials on alleged farmlands. In 2013, the land was allocated to the building of 34 government buildings. Farmers say they were never informed about these plans, and have continued to work on what to their knowledge is their land. Despite the claims, Loikaw Township Administrator Kyaw Moe said that the process of measuring the land and preparing to build will continue. Farmers in Nyaungshwe Township, Southern Shan State, have filed complaints with authorities over ownership applications for confiscated lands. The case concerns about 600 acres of farmlands that were confiscated in 2012. The former Shan Government had bought the land from the farmers for the development of a proposed hotel zone in 2012, but is now selling the land to businesses. Farmers complain that they did not agree with the purchase in the first place and did not receive adequate compensation. Despite these attempts however, the government has still not resolved the issues. By way of example, on May 30, Burma’s Deputy Minister of Defense General Myint Nwe announced that the Ministry of Defense would not return more than 100 acres it confiscated in 1994 in Sittwe, Arakan State. According to him, the army’s farming projects on seized lands have saved more than 75 billion kyats (about US$51 million) annually from the state’s budget. He added that he was not planning to provide compensation for land grabbing as those confiscations were legally conducted at the time. Given the lack of progress surrounding land disputes, demonstrations keep increasing. On May 10, farmers of Dawmukala Village in Loikaw Township, Karenni State, organized a press conference to ask for the return of their confiscated land. According to them, the military has confiscated over 900 acres belonging to 264 farmers in 12 different villages in Karenni State since 1990. Chairman of the Land Committee Khu Oo Rel said the military could keep the land it needed but that it should give the discarded land back to farmers. This conference occurred in the wider context of some ten protests which took place this month by farmers, which can be found in chronology of media stories available on our website.

Growing tensions and the increase of protests over land confiscation should prompt the authorities to take action and make the resolution of land disputes a top priority, especially when the Agricultural Development Strategy and Investment Plan initiated by the government requires the cooperation of farmers. AAPP therefore urges the government to review all cases of land grabbing, to amend and/or repeal relevant law, undertake a consultation initiative to determine adequate compensation for victims of illegal and arbitrary confiscation.
For more Information contact:
Ko Tate Naing Secretary +95(0) 94280 23828
Ko Bo Kyi Joint Secretary +66(0) 81 9628 713
Download for Month In Review  MiR May FINAL