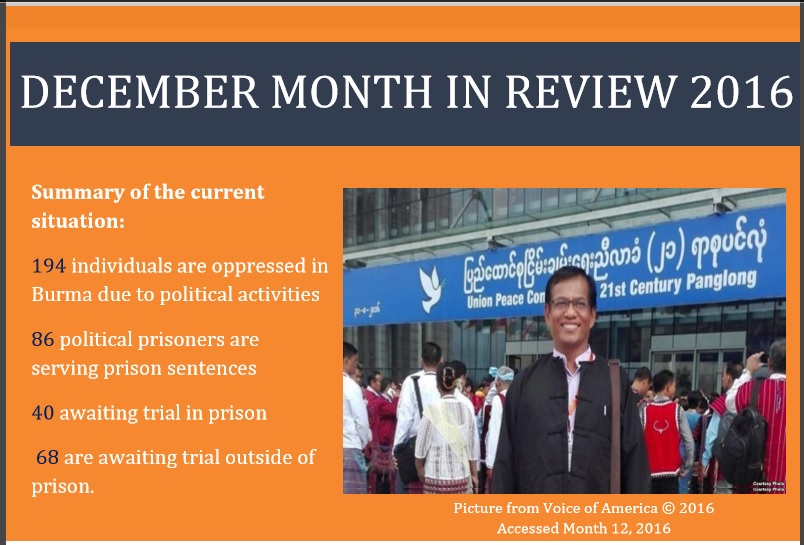 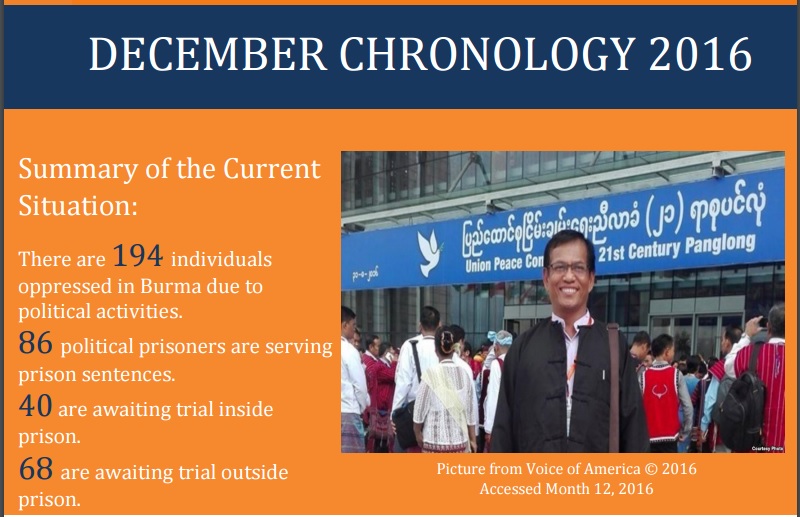 MONTH IN REVIEW
This month, 12 people were arrested, 9 of whom are from ethnic areas and two of whom were arrested under Section 66(d) of the Telecommunications Law. Three people were charged under 66(d) of the Telecommunications Law. 85 people were sentenced including 82 farmers, and 22 individuals were released. Two incarcerated political prisoners are reported to be in bad health. Farmers continued to be sentenced over arbitrary land confiscation disputes. On December 23, four farmers from Yebyu Township in Tanintharyi Division were each ordered to pay a fine of 5000 Kyat (US$3.60) by the Township Court under Section 447 of the Penal Code for the offense of trespassing. On December 22, 32 women and 40 men in Taunggyi Township, Southern Shan State, were sentenced by the Township Court to one month imprisonment with hard labor after trespassing charges were brought against them by the Military’s Eastern Command. Six people were ordered to pay a fine and released on December 22, 2016. These incidents highlight the fact that the farmer’s rights and restoration of arbitrarily confiscated land, which was promised to be defended by the NLD, remains an unresolved problem in the country. The Government therefore needs to immediately address this issue and resolve pending land confiscation matters to prevent further sentences against farmers trying to cultivate their own land. The Unlawful Association Act continues to be a tool for the arrest, detention and sentence of civilians accused of being associated with unrecognized organizations and ethnic armed groups. On December 21, Tun Tun Naing was sentenced to five years’ imprisonment by Rathedaung Township Court in Arakan State, under Section 17(1) of the Unlawful Association Act for his association with the Arakan Army. On December 15, Aung Min Soe from Pyu Township, Bago Division, who was arrested in Mae Sot for being associated with the Democratic Karen Benevolent Army (DKBA) was sentenced to three years’ imprisonment under Section 17(1). On December 22, another four men were sentenced to life imprisonment under Article 122 of the Penal Code, for the offence of High Treason, by the Mandalay District Court. Zaw Min Htwe from Mandalay, Myint Thein, Ayar Mann from Bhamaw, and Khin Maung Shwe from Mohnyin were arrested and charged for alleged connections with the Kachin Independent Army (KIA) working to establish the ‘Islamic Army’. Min Htay, a central committee member of the All Burma Students’ Democratic Front (ABSDF), a signatory group of the nationwide ceasefire agreement (NCA), was arrested by the Army in Momauk Township, Kachin State. ABSDF has been negotiating for his release with the Army through the Jointceasefire Monitoring Committee (JMC). On December 14, five villagers from Lashap village in Northern Shan State were arrested by the military. They were suspected of being affiliated with an ethnic armed group. The Special Branch Police in Lashio, Shan State, arrested 17 civilians from a guesthouse in Lashio. 13 were unconditionally released, with the police claiming that the remaining four, who continue to be detained, have ties with the Ta’ang National Liberation Army (TNLA), an ethnic armed group forming a part of Northern Alliance.
Assistance Association for Political Prisoners