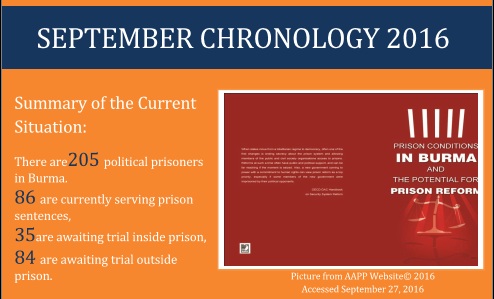 MONTH IN REVIEW
This month, one person was arrested and one was sentenced but immediately released. Three incarcerated political prisoners are reported to be in bad health.

Restrictions on media and civil and political liberties have continued throughout September. Two news journals, The Voice Weekly and Envoy, have been indefinitely suspended for failing to send articles to the censorship board for approval before publication. Journalist Aung Lwin has been charged with defamation under Section 500 of the Penal Code for having published an essay about the environmental problems caused by mining waste. He was sentenced to either incarceration or a 30,000 kyat fine on September 30 by Yay Phyu Court, he chose the fine.
On September 16, the Tamwe Township Court, Rangoon rejected a motion to dismiss the charges against the five monks under State Law and Order Restoration Council Law No. 20/90 of the Law relating to the Sanghà Organization.

The Telecommunication Act has not become obsolete under the new Government and continues to be a tool for the arrest, detention and sentencing of civilians. On September 15, Yar Pyae, a social and political activist, was prosecuted under Article 66/d of the Telecommunication Law by the Hmawbe Court, Rangoon, for having written a defamatory post about Commander-in-Chief Senior General Min Aung Hlaing and monk Wirathu.

On September 19, Sagaing labor rights protestors appeared before Tatkon Township Court for their eleventh court hearing, while five of the fifteen laborers and students involved in the protest continued boycotting their court hearings.

Clashes in ethnic areas between the Burma Army and different ethnic armed groups continued throughout September, leading to significant human rights violations. On September 19, a man from Myauk-u Township, Arakan State, was arrested for his alleged relations with the Arakan Army.

September also saw some promising advancements in the human rights context. The Upper House, following the Lower House’s commitment, has passed a bill repealing the Emergency Provisions Act, an outdated and repressive law used to suppress dissidents. The Emergency Provisions Act, enacted in 1950, carries the death penalty and up to life in prison for very vague offences against the state. The repealing of the law, which was used to suppress dissidents, represents a significant and positive move in reforming Burma’s domestic legislation, which is a necessary step to move towards democracy. Furthermore, the Lower House has abolished Section 13(g) – overnight guest registration – of The Ward or Village Tract Administration Law, a law used to hunt down political activists under the military regime. In addition, the Lower House has expressed its intention to take actions against the Myanmar National Human Rights Commission (MNHRC), which has failed to protect the fundamental rights of Burma’s citizens and which was at the end of July, deemed ‘ineffectual’ by lawmakers in the Union Parliament of Rangoon. Finally, on September 15, the seven soldiers involved in the murder of five civilians in Mong Yaw village in June 2016, were sentenced to five years imprisonment with hard labor by a court martial in Lashio Township, Shan State. This was an unprecedented move from the military and significant for holding individuals accountable moving forward.
For more information:
Assistance Association for Political Prisoners
Tate Naing   (Secretary)    +66(0) 812878 751
Bo Kyi    (Joint Secretary)   +95(0) 9425308840