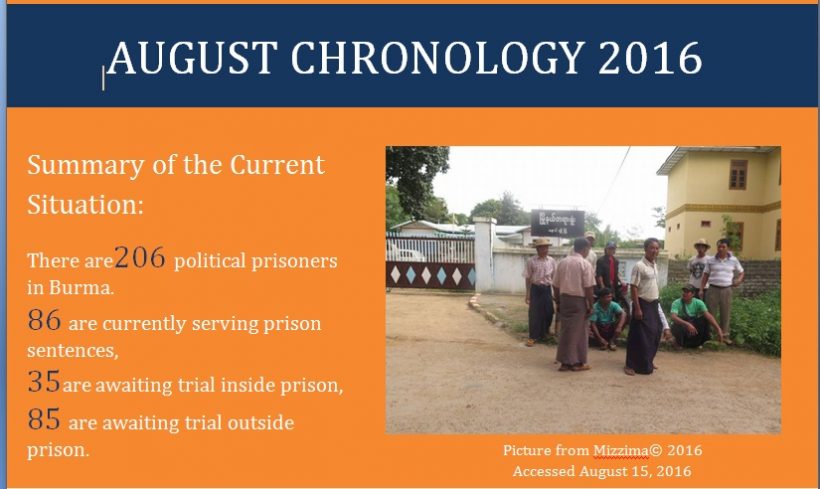 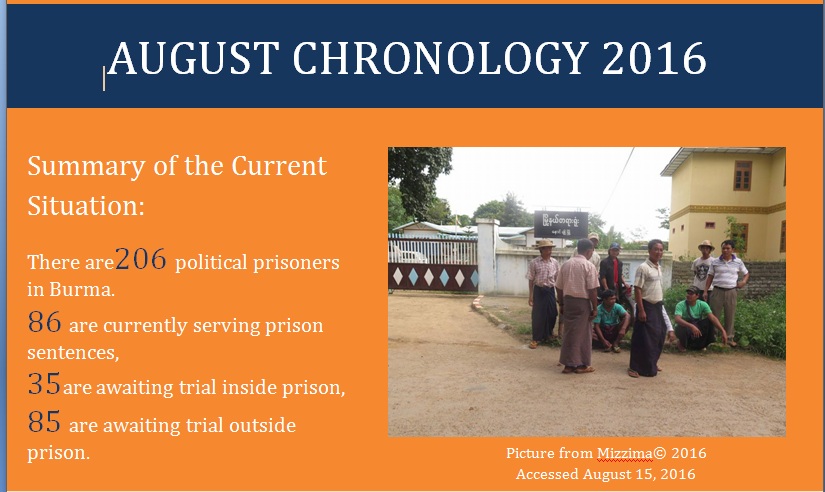 MONTH IN REVIEW
This month, seven local people from ethnic areas were arrested and 22 farmers were charged. Thirty-five people had cases against them dropped and three incarcerated political prisoners are reported to be in bad health.
Charges and sentences under repressive legislation continued to be handed down at the expense of activists, farmers and ethnic minorities.  On August 15, ten farmers from Naung Cho Township, Shan State, charged in 2014 under Articles 427, 447, 506 and 294 of the Penal Code, faced their 52nd court hearing. A further 12 farmers from Laputtar Township faced their first court hearing this month after being charged under the Forest Law for offences including trespassing.  On August 19, five of the 15 laborers and students involved in the Sagaing labor rights protests, continued their boycott of the legal system while the other 10 ended their boycott and faced their first court hearing.
Restrictions on media, and civil and political liberties have continued in August. Hla Phone was charged after allegedly defaming the military using the Kyat PhaGyi aka “big rooster” Facebook account, under Article 66(d) of the Telecommunication Law, Article 505(b) of the Penal Code and Article 16 of the Union Flag Law. In addition, Tamu District Administrator banned the Kukee Ethnic Forum, claiming that the Kukee group is not included in the list of recognized ethnic groups and allowing the forum could cause problems.

August also saw some promising advancements in the human rights context. This month, Nay Pyi Taw Development Committee dropped the charges against 35 farmers previously charged for trespassing. Moreover, the government removed the names of 619 people (248 Burmese and 371 foreigners) as part of their 100 day plan. In addition, on August 24, the Lower House of Parliament approved the abolishment of the 1950 Emergency Provisions Act.
for more information
Assistance Association for Politcal Prisoners
Tate Naing     Secretary        +66(0) 812878 751
Bo Kyi     Joint Secretary        +95(0) 942530 8840