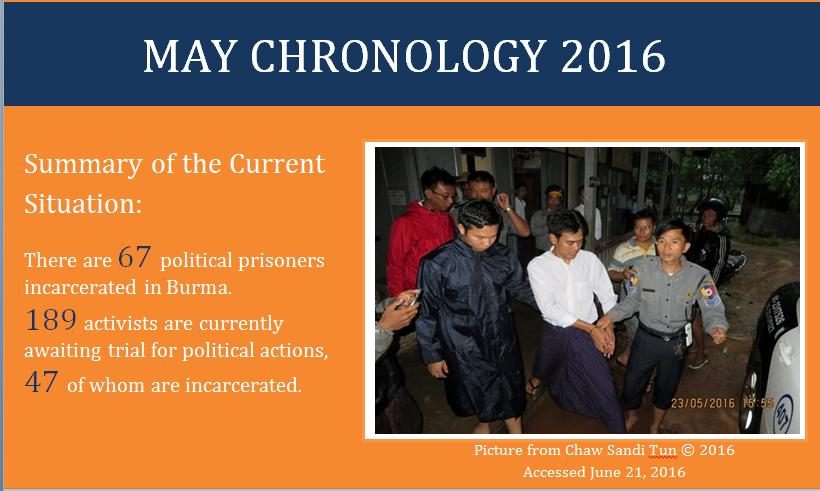 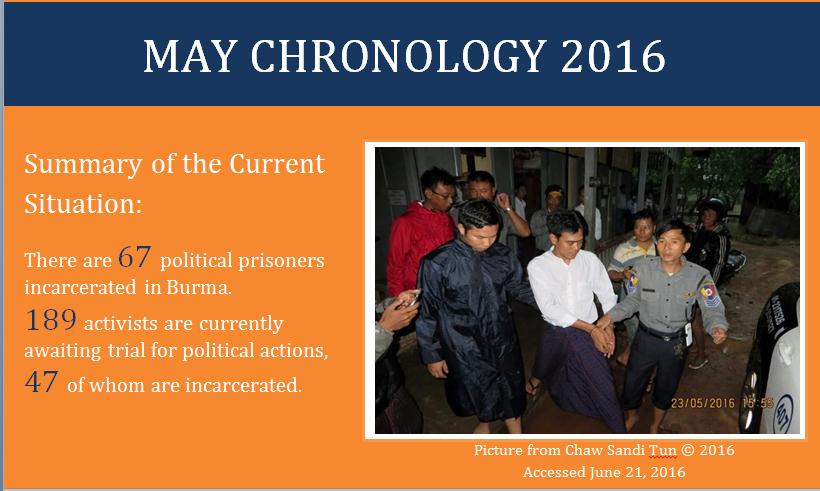 Summary of the Current Situation:
There are 67 political prisoners incarcerated in Burma. 189 activists are currently awaiting trial for political actions,
47 of whom are incarcerated.
MONTH IN REVIEW
This month, 90 political activists were arrested in total including 71 labor rights activists. Nine individuals were sentenced and 77 were released, 56 of those were labor rights activists. Three political prisoners are reported to be in bad health. Also this month, 51 activists were charged. AAPP is yet to confirm the identities and details of 37 of farmers included on the facing trial list.

This month authorities continued to threaten activists with legal action and detain them under repressive legislation to deter them from exercising their right to peaceful assembly. On May 18, 71 workers from Sagaing demanding better labor rights were arrested and 51 were taken into detention after defying orders by authorities to end their peaceful protest march into Nay Pyi Taw. While 36 of the workers were released, 15 remain in detention facing charges under Article 143, 145, 147 and 505b of the Penal Code.

Though currently being reviewed by parliament, the Peaceful Procession and Peaceful Assembly Act was also used to deter peaceful activists this month.

Students involved in an interfaith march through Rangoon on May 14 have been threatened with legal action under Section 19 of the widely contested law. They had applied for a permission to march from Tarmwe township to Mahabandoola Park, but were only granted permission to gather in the Bo Sein Mann grounds which they refused as they had deliberately chosen a route past different religious buildings.
Moreover, several protesters against the Letpadaung Copper Mine project are to be charged under Section 18, including solo protester Nay Lin Soe aka Pho Sanay as well as the leaders of a larger protest in Letpadaung that started on May 4, Ma Sanda and Mar Cho.

The equally contested Telecommunication Act also hasn’t become obsolete under the new government. Maung Saungkha was sentenced to six months in prison under Article 66(d) for writing a poem about a tattoo of the president on his penis. He was released on May 24, the day of his court hearing, already having served his sentence while awaiting trial in prison. Social and political activist Yar Pyae aka Myo Thu Win was arrested on May 22 for allegedly defaming the Commander-in-Chief on social media and is also to be charged under Section 66(d).

Also this month, several cases of human rights violations and torture perpetrated by the Burma Army were reported. In Shan State, the Burma Army is accused of committing grave human rights abuses in a recent offensive against the Shan State Progress Party/Shan State Army-North (SSPP/SSA-N) in Kyaukme Township. This includes the use of 43 villagers, including women, as human shields; severe torture of at least 5 villagers; and extrajudicial killing of at least 3 civilians, with 5 other bodies yet to be identified. In Kachin State, Zaw Awng and Naw Seng, villagers from Waingmaw Township, reported that they were detained and tortured by the Burma Army under suspicion of being members of the Kachin Independent Army (KIA) on May 23.