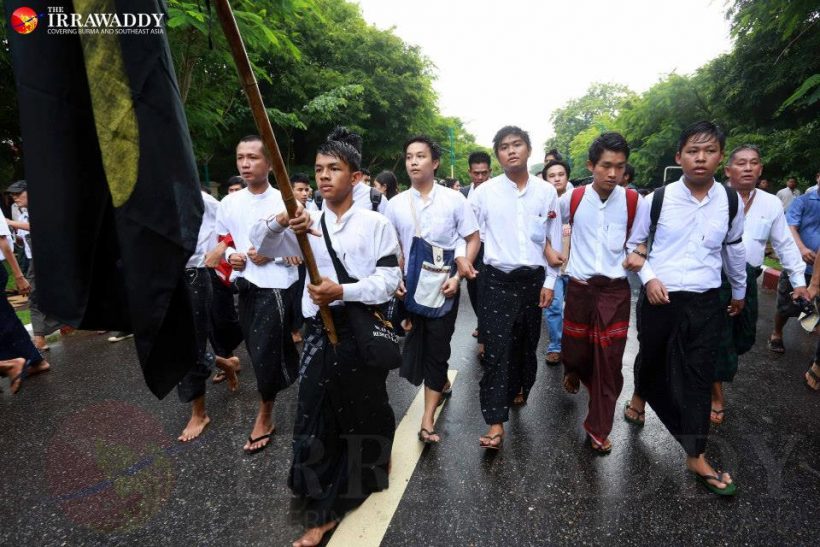 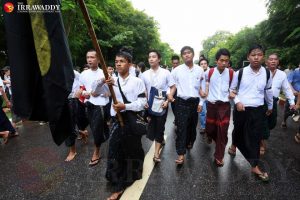 Summary of the Current Situation
July, 2015
As of the end of July there are 120 political prisoners in Burma, with 448 activists awaiting trial.

MONTH IN REVIEW
This month, 16 people were arrested and charged, 15 were indicted, 21 were sentenced, and 17 were released. Five political prisoners are reported to be in bad health.
Among those reported to be in bad health are students detained in Tharyarwaddy Prison following the violent crackdown on the student protests against the National Education Law.
Fourteen of the students and their supporters were released on bail in July, however 63 remain in detention. On-going health concerns among the students that remain in detention have prompted their parents to submit a request to the court early this month demanding that an external doctor address the detainees’ health problems.
On July 27, the Myanmar National Human Rights Commission (MNHRC) met with a group of students who were present during the March 10 crackdown in Letpadan. The students had filed a case with the MNHRC providing testimony from victims of the crackdown and making a case that the authorities’ brutality was unlawful. The students also objected to the decision to charge the students under Burma’s Penal Code. According to the Democracy Education Initiative Committee, students from the committee plan to sue the authorities who
ordered the unnecessarily brutal March 10 crackdown on peaceful protesters.
This month also saw the announcement of Burma’s long-awaited general election date – on July 8, the Union Election Commission (UEC) announced the election is to be held on November 8, 2015. A total of 1,142 MP seats will be up for grabs. Three hundred and thirty constituencies were confirmed for the lower house, 168 for the upper house, and 644 for regional parliaments. A further 29 regional seats will be appointed to ethnic representatives.
In light of the election date announcement, the Former Political Prisoners Society (FPPS) sent a letter to lawmakers including the militarybacked Union Solidarity Development Party (USDP), urging them to call for the release of all political prisoners ahead of the election.
However, in yet another move to officially deny the existence of political prisoners in Burma, the Deputy Minister for Home Affairs this month told parliament that the term “political prisoners” is unconstitutional and violates the rights of prisoners to the same legal status.
Chairperson for the National League for Democracy (NLD), Aung San Suu Kyi, stated that the statement made by the minister was inconsistent with government policy: “The government itself formed a committee to oversee the release of political prisoners. Now the deputy Home Affairs minister is rejecting the term. I think this is inconsistent.”
At the end of the month, on July 30, the Ministry of Information announced the release of 6,966 prisoners, including 210 foreign detainees, in the first Presidential amnesty since October 2014. Only 13 political prisoners were included in the release.
(July 3, 2015 – DVB)
(July 8, 2015 – The Irrawaddy)
(July 8, 2015 – Myanmar Times)
(July 15, 2015 – RFA/Burmese)
(July 22, 2015 -DVB)
(July 27, 2015 – The Irrawaddy)
Tate Naing, Secretary +66 (0) 81-2878-751 (Thailand)
Bo Kyi, Joint Secretary +95 (0) 94-2530-8840 (Burma)