Statement on Data Collection of Political Prisoner Releases: Continued Lack of Transparency by Junta Since 18 October 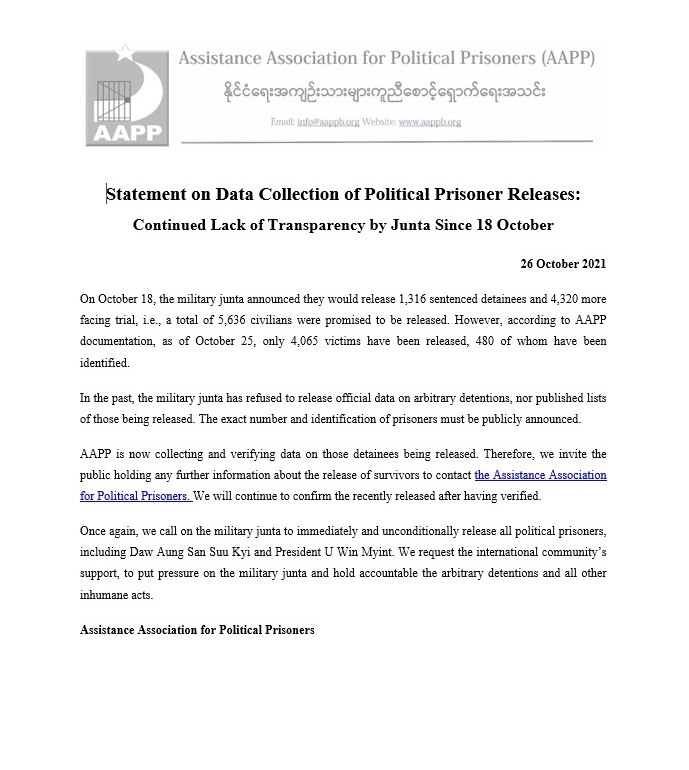 On October 18, the military junta announced they would release 1,316 sentenced detainees and 4,320 more facing trial, i.e., a total of 5,636 civilians were promised to be released. However, according to AAPP documentation, as of October 25, only 4,065 victims have been released, 480 of whom have been identified.

In the past, the military junta has refused to release official data on arbitrary detentions, nor published lists of those being released. The exact number and identification of prisoners must be publicly announced.

AAPP is now collecting and verifying data on those detainees being released. Therefore, we invite the public holding any further information about the release of survivors to contact the Assistance Association for Political Prisoners. We will continue to confirm the recently released after having verified.

Once again, we call on the military junta to immediately and unconditionally release all political prisoners, including Daw Aung San Suu Kyi and President U Win Myint. We request the international community’s support, to put pressure on the military junta and hold accountable the arbitrary detentions and all other inhumane acts.