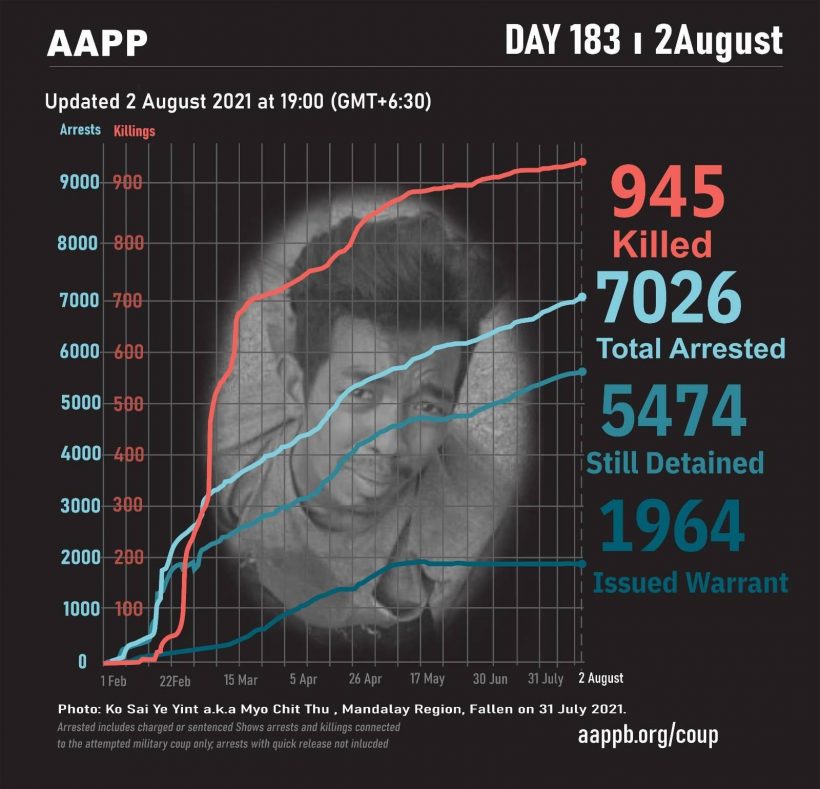 As of 2 August, (945) people are now confirmed killed by this junta coup. AAPP compiled and documented (5) fallen heroes today. These (5) fallen heroes from Mandalay in Mandaly Region, Kalay Township and Kani Township in Sagaing Region were killed on previous days and documented today. This is the number verified by AAPP, the actual number of fatalities is likely much higher. We will continue adding as and when.

Lam Khant Htan and Lar Kein from Thar Yar Kone Village in Sagaing Region’s Kalay Township were arrested on July 30 on suspicion over weapons allegedly found in a private car they were passengers in when they arrived at the entrance of Kalay Town returning home from work in China. His family was informed on July 31 that Lam Khant Htan died due to COVID-19. However, it is reported his leg and hand were broken, with many injuries to the head, back, leg and neck. Lar Kein who was detained along with Lam Khant Htan is still being detained.

12 men who were arrested by terrorist junta’s troops on July 26 and July 27 in Sagaing Region’s Kani Township, were later found killed with injuries consistent with torture. These men included three brothers named Aung Myint Thu, Chin Twin Maung, and Phyo Kyaw Aung from Kani Town, seven men including a 14 year-old child from Thayet Taw Village, and two men from Kho Twin Village. Their bodies were found in the forest near East Taung Pauk Village in Kani Township on July 31.