Children have been killed in the bloodshed by the military junta 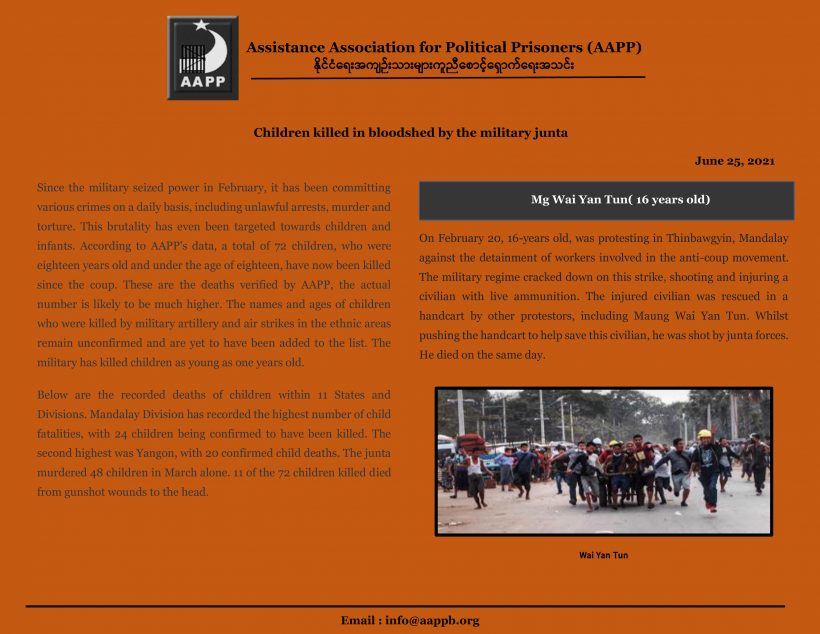 Since the military seized power in February, it has been committing various crimes on a daily basis, including unlawful arrests, murder and torture. This brutality has even been targeted towards children and infants. According to AAPP’s data, a total of 72 children, who were eighteen years old and under the age of eighteen, have now been killed since the coup. These are the deaths verified by AAPP, the actual number is likely to be much higher. The names and ages of children who were killed by military artillery and air strikes in the ethnic areas remain unconfirmed and are yet to have been added to the list. The military has killed children as young as one years old.

Below are the recorded deaths of children within 11 States and Divisions. Mandalay Division has recorded the highest number of child fatalities, with 24 children being confirmed to have been killed. The second highest was Yangon, with 20 confirmed child deaths. The junta murdered 48 children in March alone. 11 of the 72 children killed died from gunshot wounds to the head.

On February 20, Maung Wai Yan Tun, 16-years old, was protesting in Thinbawgyin, Mandalay against the detainment of workers involved in the anti-coup movement. The military regime cracked down on this strike, shooting and injuring a civilian with live ammunition. The injured civilian was rescued in a handcart by other protestors, including Maung Wai Yan Tun. Whilst pushing the handcart to help save this civilian, he was shot by junta forces. He died on the same day.

Maung Khant Nyar Hein, was a 17-year old, first year medical university student, and a member of the defense team during a protest against the coup in Tamwe Township, Yangon Division on March 14. He was shot by junta troops, who then dragged him away. He died on the same day. Junta forces also beat and arrested a young woman who came to help him when he was shot.

On March 27, Ma Aye Myat Thu, a 11-year old, grade six student was shot unprovoked to the ear by junta troops as she played in front of her house. She died within the hour, in Thukhawadi Ward, Mawlamyine Township.

Maung Aung Kyaw Htwe, a 17-year old, and his friend were hit by a military vehicle, without reason as they rode a motorbike at the intersection of Pyigyitagon, Mandalay, and Chanmyathazi and Patheingyi Road on June 6. Both of them died that night. The dead body of Maung Aung Kyaw Htwe was recovered, however, his 18-year old friend was not identified, and the name could not be confirmed.

Ma Moe Thandar Aung, was just 1-year and 6-months old, from Kengtung Township, Shan State. On June 19, she fell sick, so her father took her to the clinic at around 9 pm. On their way back, the military signaled to stop them, however because her father was carrying his daughter in his arms, he was unable to stop suddenly. Because of this, the deputy administrator of the General Administration Department from Kengtung Township hit the motorbike with his vehicle. Both father and daughter were severely injured, and his daughter, Ma Moe Thandar Aung, was pronounced dead within minutes.

The unprovoked shooting and killing of children are a grave violation of the law and of human ethics. This inhumane act committed by this brutal regime can have no justification. These horrific actions prove that the regime will stop at nothing to oppress civilians.

Despite the fact that Burma has signed both international, and domestic law, safety and security of children of Burma is under significant threat by the junta regime. The junta are now in part control of child protection mechanisms, including the courts. Children are now unprotected by the law and are in constant danger under the junta. This undermines all the vital work that has been done by international organizations, NGOs and domestic charities within Burma to ensure the rights of children. The Assistance Association for Political Prisoners urges international human rights organizations, including the United Nations, to take effective action against the military group, which commits horrific crimes upon children.