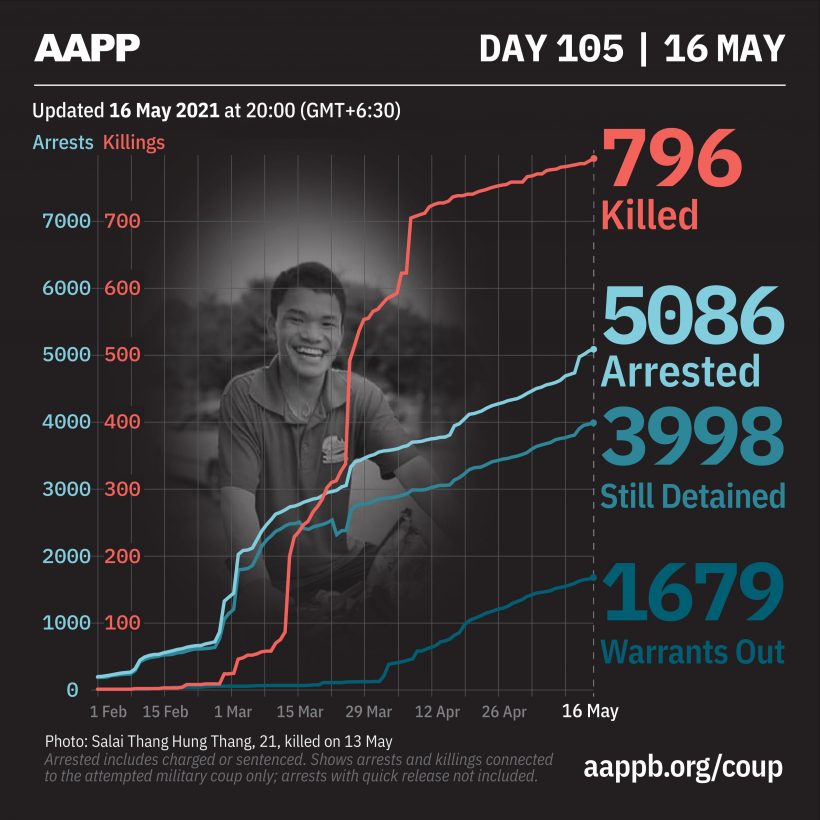 As of May 16, a total of (3998) people are currently under detention; of them (92) are sentenced. 1679 have been issued arrest warrants; of them 20 were sentenced to death and 14 to three years imprisonment with hard labour, who are evading arrest. We are verifying the recently released detainees and continuing to document.

Today, anti-military protests continued across Burma, in Innwa town, Mandalay Region the Mandalay Sanga Union protest was suppressed, though no-one was injured or arrested. In Myitkyina Township, Kachin State, four people were arrested as the protest was scattered. Police used civilian cars to chase the protesters. Last night in Waingmaw town, Kachin State, a young man was arrested and four others injured in an intentional car crash. Such barbaric atrocities are now becoming a predominant tactic of the junta.

Yesterday in Mindat town, Chin State, the junta used excessive force against the entire city. This morning, civilians who fled were ambushed on their way. The terrorist group has been using violence to oppress rural areas. Nyaw Pyin Village, Launglon Township, Tanintharyi Region and Monpin Village, Sintgaing Township, Mandalay Region were raided by large numbers of junta troops this morning. During the raid, at least four villagers from Nyaw Pyin village were arrested, every single door in Monpin village was smashed, and their belongings and money looted. Aside from this, three houses, including the house of the NLD village chairman, were destroyed yesterday evening in Kan Thar Yar village, Khin-U Township, Sagaing Region, bags of rice and 700,000 kyats were looted.

On 15 May, in Kho Yaung Village, Tangyan Township, Shan State, the Hsipaw Township NLD parliamentary candidate Sai Kan Nyunt was beaten to death, he was found dead with stab wounds. NLD members are being persecuted on a daily basis, the deaths are beyond doubt the junta’s doing.