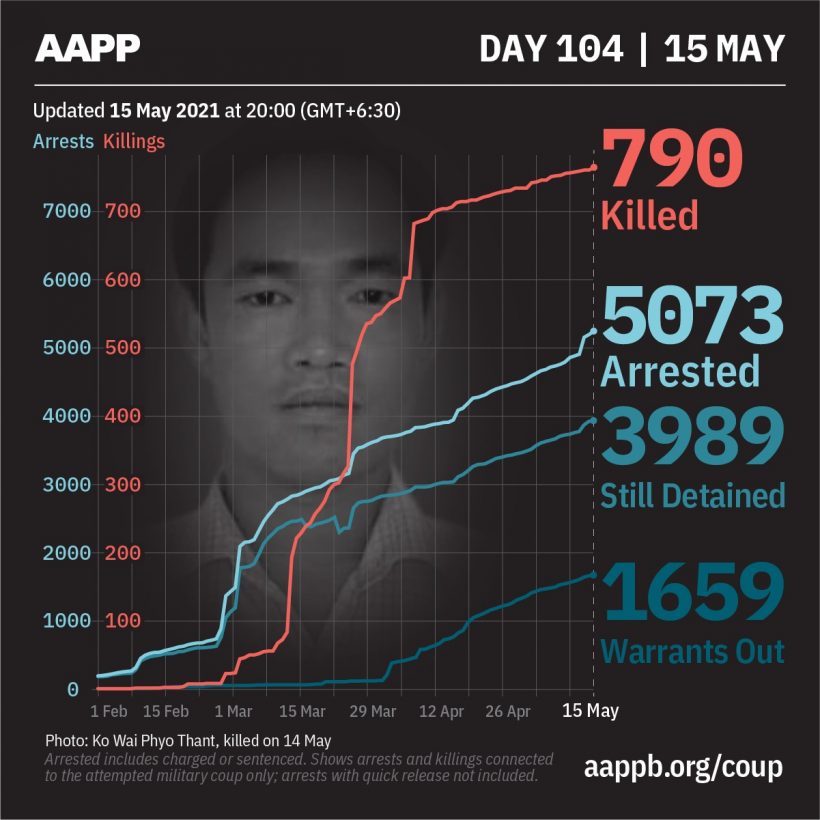 As of 15 May, (790) people are now confirmed killed by this junta coup. AAPP compiled and documented (2) fallen heroes today. These (2) fallen heroes from Mandalay City in Mandalay Region and Mindat Town in Chin State were killed the previous days and documented today. This is the number verified by AAPP, the actual number of fatalities is likely much higher. We will continue adding as and when.

The Assistance Association for Political Prisoners (AAPP) has not yet confirmed any fallen heroes today. This is the number verified by AAPP, the actual number of fatalities is likely much higher. We will continue adding as and when.

As of May 15, a total of (3989) people are currently under detention; of them (92) are sentenced. 1659 have been issued arrest warrants; of them 20 were sentenced to death and 14 to three years imprisonment with hard labour, who are evading arrest. We are verifying the recently released detainees and continuing to document.

Civilian’s security is deteriorating day after day, the junta’s violence has reached utter ruthlessness, they are shooting, killing, arbitrarily charging, robbing , looting , destroying and vandalism, there has been no reduction by the junta.

In Mindat Town , Chin State, the situation is getting worse due to resistance against the terrorist group, there is intense fighting and clashes every day. The junta group brought in nearly a thousand further troops and repeatedly fired heavy artillery shells. The junta troops entered the town and opened fire on civilians. Civilians were injured including children, they have not been able to get medical treatment. More than 15 youths were taken hostage and used as human shields when the junta came into the city. They are arresting all the men who are living in Mindat town. Their doors are being broken into, they are being beaten in the houses and arrested.

This disproportionate use of brutal force is believed to be the terrorist aim for eradicating the People’s Defense Forces (PDF). The use of human shields is a “war crime” and impunity for these attacks are a failure to humanity.

The terrorist group is carrying out unprovoked and intentional shootings, acts such as torture are perpetrated on a daily basis. In Monywa , Sagaing Region, Sein Win, a poet, philanthropist and veteran politician was collecting donations for IDP’s and he was at a friend’s house talking. Then an unidentified man arrived and poured gasoline on him and set him on fire. Such atrocities are being repeatedly perpetrated by the terrorist group who has become even more hostile to people against the coup.

In Aungmyethazan Township, Mandalay, a Burmese teacher who was shot in the leg during a protest rally on May 2 died at Pyin Oo Lwin Military Hospital, his family was not allowed to bury his body and they did not say how he died. The lack of cause of their death indicates what truly happened, since the coup the terrorists have tortured many people to death. They are the only group which commits these crimes.

The junta is also vandalizing and looting on a daily basis. Last night in Sagaing Region, Shwe Bo Market was set on fire during curfew time,  locals say it was linked to the junta’s action. In Myitkyina, Kachin State, the junta threatened  whoever passed by on the road with their guns, demanding money and saying they would shoot the people if they did not give money. A similar crime was reported in Mogaung Township, clearly showing the junta is a criminal robber.

Last night, the junta raided Zivita Dana Sangha Hospital and arrested a patient who was seriously injured,  a doctor, intern, two volunteers, and a paramedic. A total of six people were arrested. They even abuse people’s rights in places that should be most protected, clear violations of the Geneva Convention.

Despite all these atrocities, no effective action is being taken against the terrorist group. Burma gets general agreement statements from the five ASEAN statements, but no action – just silence.

This is encouraging the military dictatorship and delaying democracy.