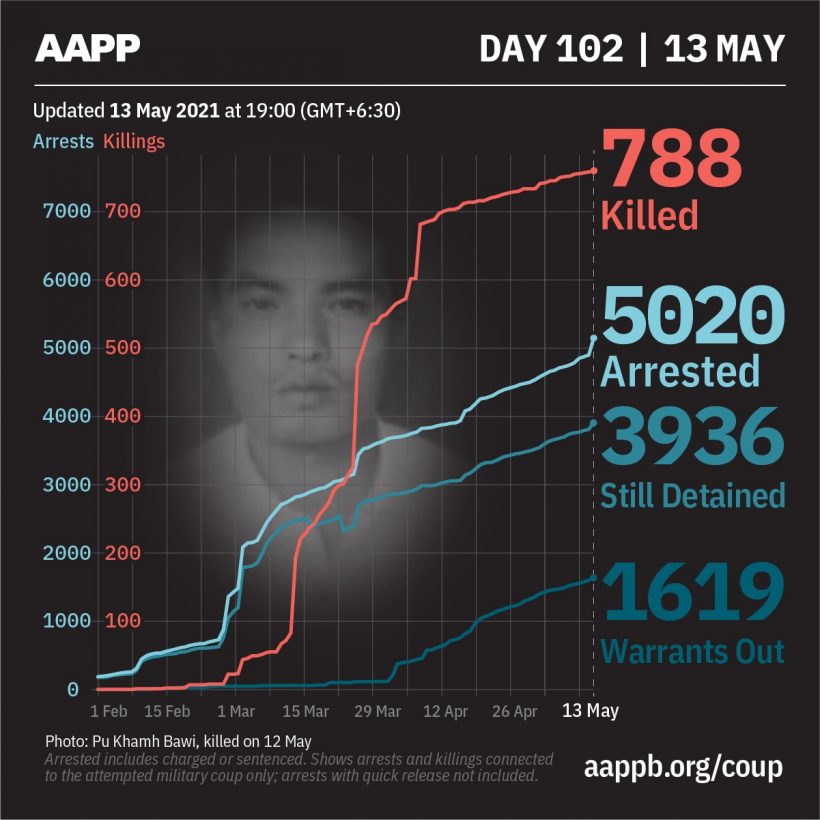 As of 13 May, (788) people are now confirmed killed by this junta coup. AAPP compiled and documented (3) fallen heroes today. (1) from Mindat Town in Chin State died on 13 May. (2) from Talote Town, in Myingyan Township, Mandalay Region and Hakha Town in Chin State were killed on previous days and documented today. This is the number verified by AAPP, the actual number of fatalities is likely much higher. We will continue adding as and when.

As of May 13, a total of (3936) people are currently under detention; of them (90) are sentenced. 1619 have been issued arrest warrants; of them 20 were sentenced to death and 14 to three years imprisonment with hard labour, who are evading arrest. We are verifying the recently released detainees and continuing to document.

Today, people across Burma continued to fight to defeat the military dictatorship. Early this morning in Nabule Region, Dawei Township in Tanintharyi Region, junta forces cracked down on protests, arresting four civilians who were not participating in the protests. Yesterday evening, the junta suppressed a protest taking place in Nanat Taw Ward, Loikaw Township in Kayah State using unmarked cars and military vehicles and fired real bullets into houses. During this crackdown 10 civilians, and three children were arrested, including a 12-year-old child. In recent days, junta forces have carried out a series of arrests upon children during crackdowns.

The people of Burma continue to defend themselves, using any weapon they can find, particularly in areas which junta forces have used excessive force against locals – using artillery on civilians. Early this morning, Mel Thel Kyo Kwin Village in Chaung U Township, Sagaing Region was attacked by junta forces. Villagers tried to defend themselves, but were later surrounded by the military, who opened fire on them, forcing them to flee from their village. At this time, junta forces were also shooting in Chaung U Town. Since last night, fighting between the military and the Mindat People’s Defence Force has resumed in Mindat Town, Chin State, where the junta has been shelling the town with heavy artillery. This violence resulted in the death of a member of the Mindat People’s Defense Force, and injury to four other civilians.

This extremist terrorist group despises and oppresses civilians, people are given no protection, and these villagers and other civilians have been left to fight for themselves.

This morning, junta forces raided Myay Taw Village in Yezakyo Township, Magway Region, searching for civilians who had fled from other areas. They searched houses, destroying property and beat any civilians they found.

The junta has been torturing and killing people on a daily basis. After they murder civilians, they threaten their families and force them to sign false death certificates, so they can release fake news about the death. Some families have been told that if these certificates are not signed, the body will not be returned to them. This occurs daily, allowing the junta to attempt to cover up their atrocities and make deaths seem unrelated to junta activities.

Yesterday in Talote Town, Myingyan Township in Mandalay Region, a Technology College student, who was shot and detained whilst defending against the military, died at the interrogation center. Interrogation under this terrorist regime is known to be severe, so it is assumed this student died after being tortured, and from a lack of medical attention after his gunshot wound.

In addition, on May 9,  in Hakha in Chin State, two locals were detained. The junta later announced they both died due to health conditions. Both men were severely beaten, and could not walk properly before their death. The junta did not return their bodies to their families, and the bodies were instead burned. These kinds of atrocities are frequently committed by this terrorist group, whose crimes worsen as they continue to treat civilians as their enemies.

The junta have been oppressing detainees, especially young people, and have been making false allegations about them. On May 10, the terrorist group cracked down on protesters in Bom Mar Ward, Tanintharyi Region in Dawei Town, arresting some civilians. The junta claimed they were seized with weapons. On May 11, two youths arrested in Muse Town in Shan State were alleged to have been carrying weapons. Junta forces make these accusations under sections of the law which hold long prison sentences to ensure protesters are kept in jail for a long time. They do this to intimidate civilians, and threaten that this could happen to anyone who protests against them.