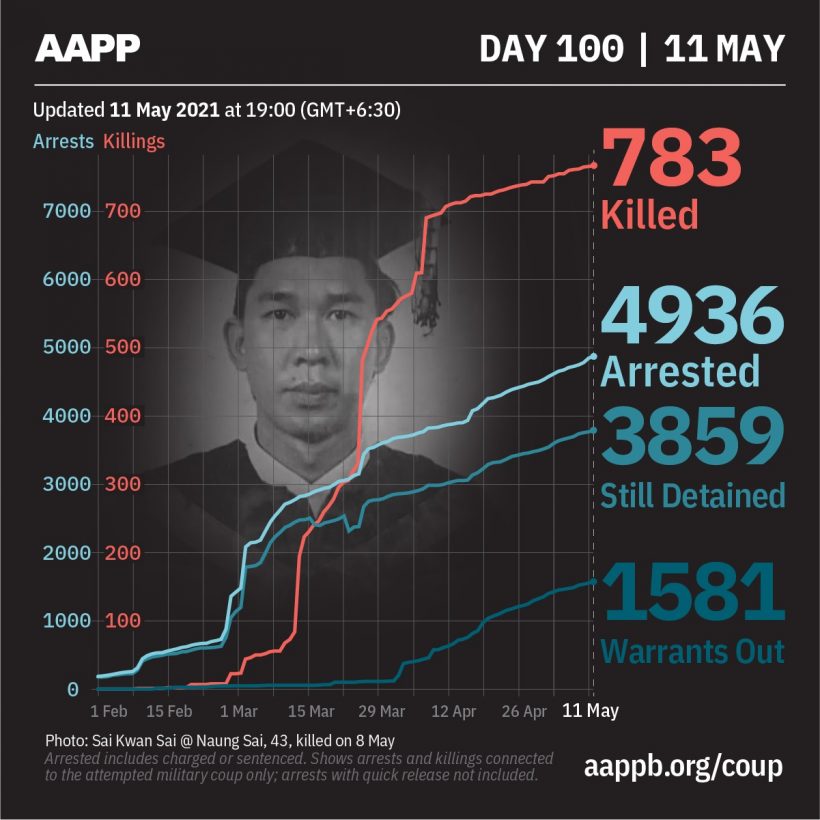 As of 11 May, (783) people are now confirmed killed by this junta coup. AAPP compiled and documented (2) fallen heroes today. These (2) fallen heroes from Nanmati and Hopin Towns in Kachin State were killed the previous days and documented today. This is the number verified by AAPP, the actual number of fatalities is likely much higher. We will continue adding as and when.

As of May 11, a total of (3859) people are currently under detention; of them (86) are sentenced. 1581 have been issued arrest warrants; of them 20 were sentenced to death and 14 to three years imprisonment with hard labour, who are evading arrest. We are continuing to verify the recently released detainees.

Today marks the 100th day under military rule. This terrorist group unlawfully seized power and since then has used varied forms of violence and torture upon civilians. Their constant acts of brutality and persecution have allowed them to clearly stand out as a terrorist organisation. The junta’s non-compliance with internationally agreed military rules and regulations is damaging the reputation of armies globally.

Currently in Burma, political, social, business and health sectors are all on the verge of collapse. Health services which were already overburdened due to covid, have been particularly affected. Civilians have been unable to access healthcare and covid tracing has ceased, putting the population at risk of facing a third wave of covid. During these 100 days, civilians have been exposed to various forms of persecution and have had their properties looted, robbed and destroyed on a daily basis. As well as this, there has been intense conflict in the ethnic states, resulting in the displacement of thousands of people, as they are forced to flee to jungles. Despite these dire circumstances, civilians have affirmed that neither pressure from this terrorist group, nor inadequate ASEAN soft resolutions will be effective. It appears that these civilians have been left to defend themselves and end this dictatorship on their own.

On 11 May, across Burma civilians continued to protest against the military dictatorship. This morning in Phone Maw ward, Dawei city in Tanintharyi Region as civilians were preparing to protest, junta forces in unmarked vehicles opened fire on the protesters, injuring one civilian. After this crackdown, junta forces followed civilians into their houses, shooting and arresting them. More than 10 civilians, including one woman have been arrested. The terror of the junta is highlighted through their use of unmarked cars and motorbikes.

Junta force’s unprovoked shooting is worsening day by day, killing a rising number of civilians. Last night in Namti town, Kachin State junta shooting left one young man dead, and a further three wounded. One of the men injured sustained a serious injury after being shot in the arm. The other two injured are on the run, evading arrest.

On the night of May 8, veterinarian Dr. Sai Aik Kwan, living in Hopin town, Mohnyin Township in Kachin State was arrested by soldiers as he passed by Infantry Battalion 389 based in Hopin. The soldiers tied him up, shot him in the head and left his body next to a drain. His family recovered the dead body, but on the day of the funeral the junta took the body back, looted it and returned it with the head dismembered. On the death certificate, they claimed he died of a drug overdose. It is clear that Dr. Sai Aik Kwan was unjustly murdered. The same situation occurred with the death of poet Khat Thi, where his wife was forced to sign a false death certificate to cover up their crimes and destroy evidence. This terrorist group is responsible for each and every crime they have committed. There must be accountability.

Junta forces continue to severely oppress public servants involved in the CDM. It is because of the civil disobedience movement that the juntas operating mechanisms have been completely cut off. Yesterday, in Letpan village, Waw Township in Bago Region four CDM education officers were arrested by the junta, and released on bail by their appointed village administrator. This was done to create the impression that junta forces saved them by releasing them. It is possible that in the future they will be made to pay for their freedom. We can see that this terrorist group is now using tactics to gain political advantage and create a widespread system of bribes.