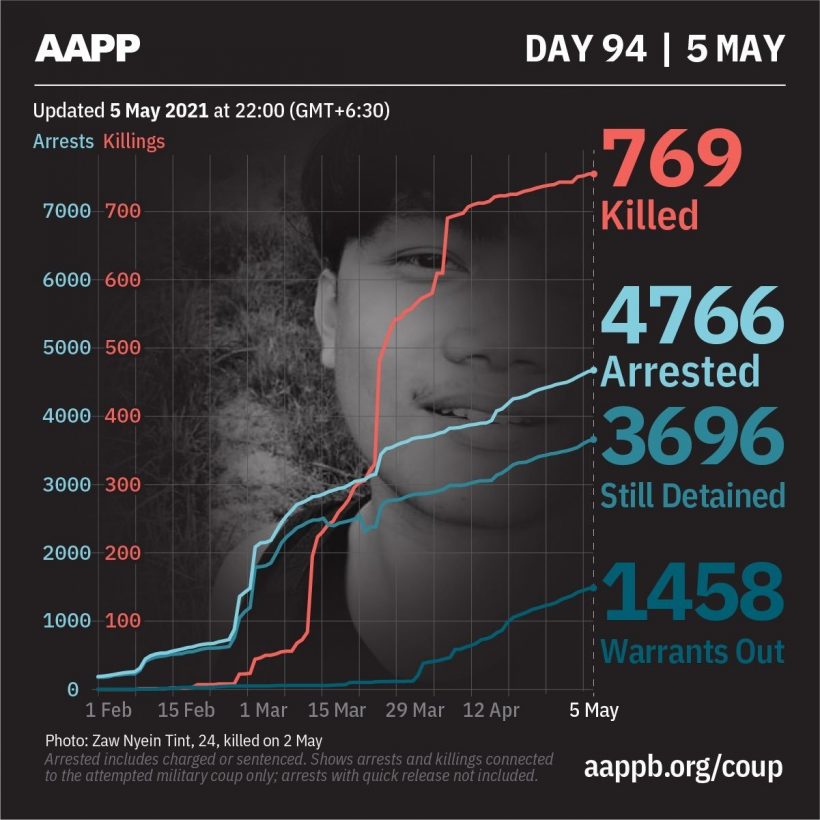 As of 5 May, (769) people are now confirmed killed by this junta coup. The Assistance Association for Political Prisoners (AAPP) has not yet confirmed any fallen heroes today. This is the number verified by AAPP, the actual number of fatalities is likely much higher. We will continue adding as and when.

As of May 5, a total of (3696) people are currently under detention; of them (83) are sentenced. 1458 have been issued arrest warrants; of them 20 were sentenced to death and 14 to three years imprisonment with hard labour, who are evading arrest. We are verifying the recently released detainees and continuing to document.

The longevity of the coup in Burma has led to near state collapse. Unarmed civilians face threats with weapons and daily junta atrocities, as well as to their livelihood and future prosperity. On 5 May, the National Unity Government (NUG) announced the formation of a People’s Defence Force (PDF). AAPP welcomes the formation of the PDF in defense of unarmed civilians and the fight for democracy.

On 4 May, Myanmar’s ambassador to the United Nations, Kyaw Moe Tun, and founder of Progressive Voice, Khin Ohmar, called for the recognition of the National Unity Government (NUG) as the legitimate government in the “Unfolding Crisis in Burma” video conference held by the US House Committee on Foreign Affairs.

People across Burma from different backgrounds come together again today to protest despite the repression. This morning in Myitkyina, junta troops and police used civilian cars to crash into youths at a  motorcycle protest. 4 women were arrested and 3 motorbikes seized. This morning in Mogaung Township, near Nanmati Kyauktaung, two junta vehicles were blown up. Thereafter the junta randomly opened fire.

The terrorists in Burma commit unprovoked shootings on a daily basis, killing and injuring civilians. A villager was shot dead in a clash which took place from May 3 to May 4 around noon between junta forces and the people’s defence forces in Thar Kaung village, Gangaw Township, Magway Region. A 17-year-old boy in Thar Kaung village and a man in Paya Taung village, Pauk Township, Magway Region were shot dead by the terrorist group on 4 May. The identities are still being investigated and will be confirmed on the fatality list as and when.

Last night, according to a social media video, on Shwe Pyay Aye Road , South Dagon Township, Yangon. A group of junta police and soldiers viciously beat up on a man with a police baton and arrested him. In Aye Thar Yar ward, Monywa Township, Sagaing Region, the junta started shouting and swearing at people because they were banging pots and pans. Then proceeding to destroy people’s homes and motorbikes, throwing stones at houses and breaking windows, and beating up locals, including three women. The violence, robbery, looting, beating and arresting of civilians, including severe torture are clear indications of a junta dedicated to ruling without any law.

Media is not spared repression. The terrorists announced three media outlets, Myitkyina News Journal, 74 Media, and Tachileik News Agency would have their media licenses revoked. The junta group are trying to cover up their acts of terrorism by disrupting the flow of information between the media and public. Burma’s media sector is on the verge of collapse.