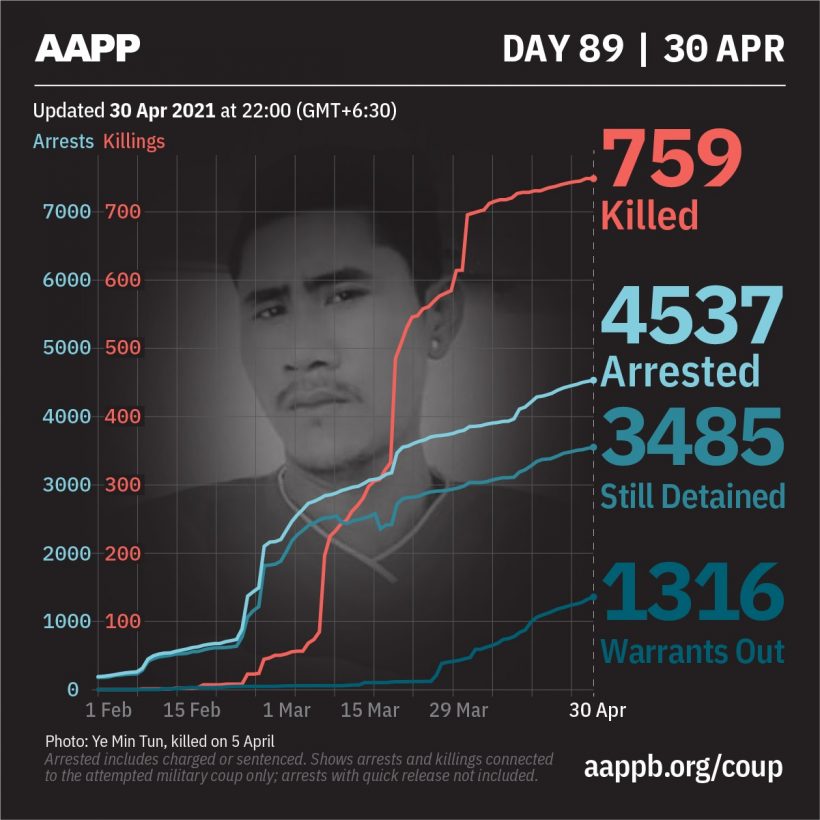 As of 30 April, (759) people are now confirmed killed by this junta coup. The Assistance Association for Political Prisoners (AAPP) has not yet confirmed any fallen heroes today. This is the number verified by AAPP, the actual number of fatalities is likely much higher. We will continue adding as and when.

As of April 30, a total of (3485) people are currently under detention; of them (80) are sentenced. 1316 have been issued arrest warrants; of them 20 were sentenced to death and 14 to three years imprisonment with hard labour, who are evading arrest. We are verifying the recently released detainees and continuing to document.

Today, people across the country, including Yangon, took to the streets to protest dictatorship, a dawn protest was suppressed by the terrorists in Kale Town, Sagaing Region. However, the protesters were able to get away and no one was arrested. This morning, the terrorist group used a Mark-2 car to crash into a protest and beat and arrest 4 civilians in South Dagon Township, Yangon Region.

Ethnic media outlets are now being targeted as the junta focuses its oppression on arresting, prosecuting, and revoking publishing rights in main cities across the country. Family members of journalists are also being taken as hostages. Terrorists went searching for the editor-in-chief of the Hakha based Chinland Post media in his house last night in Chin State but could not find him. So instead, his brother in law was taken as a hostage. This is now a policy of the junta. Up until April 29, at least 49 people have been taken as hostages at one point since the coup. Hostage-taking is a serious human rights violation and is a proven method of terrorism.

According to the Chapter (3) of Media Law; Article (4-c) states that News Media workers shall have the right to reveal issues relating to rights and privileges lost by the citizen” and Article (7-a) declared that “he/she shall be exempt from being detained by a certain security related authority”. Yet in Burma the rule of law is disregarded by the terrorists. The junta forces use the law as they unjustly please.

Conflict between junta coup forces and the Kachin Independence Army (KIA), and Karen National Liberation Army (KNLA) are intensifying in the ethnic states. Conflict has been raging in Momauk Township, Kachin State since April 10.

A man was killed and a woman seriously injured in a military plane attack on April 29. In addition to this, clashes in Kachin State have forced around 10,000 villagers to flee their homes. As a consequence of a three-day bombing campaign by coup forces, more than 2,000 locals fled from Papun District to Thailand on April 28. These locals are now reportedly living in the forest without shelter. They are being granted temporary residential permission by Thai authorities. Over ten thousand people have been displaced by airstrikes in Karen State.

Burma was developing peace and national reconciliation to bring an end to the over-70 year civil war. It is ethnic people who suffer most from the atrocities, happening now again because of this military coup.