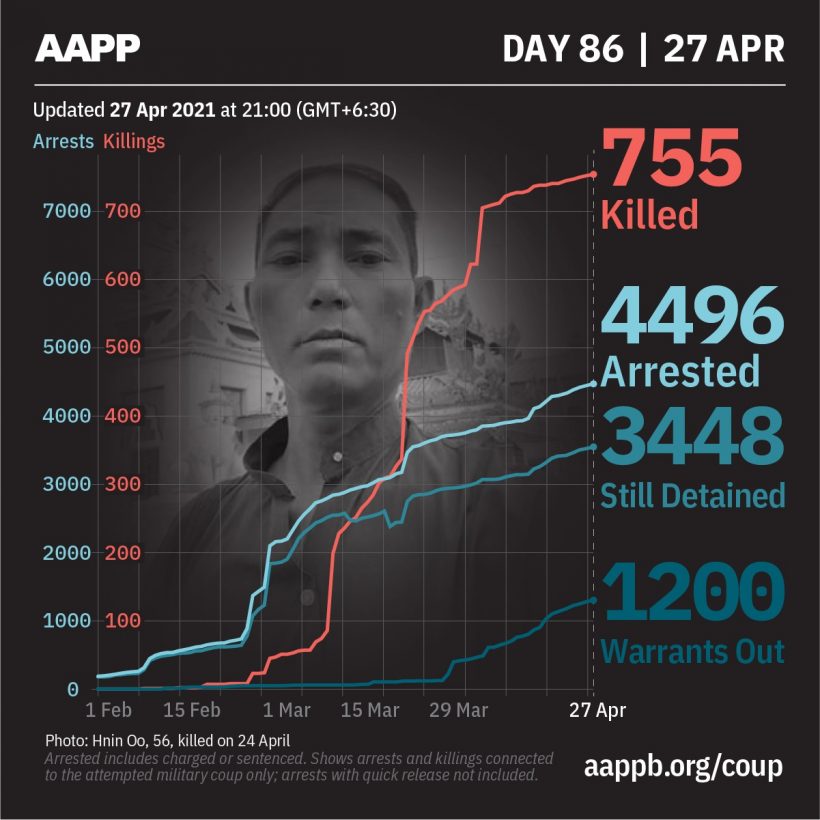 As of 27 April, (755) people are now confirmed killed by this junta coup. The Assistance Association for Political Prisoners (AAPP) compiled and documented (2) fallen heroes today. (1) from Demoso Township in Kayah State died on 27 April. (1) from Mandalay was killed yesterday and documented today. This is the number verified by AAPP, the actual number of fatalities is likely much higher. We will continue adding as and when.

As of April 27, a total of (3448) people are currently under detention; of them (79) are sentenced. 1200 have been issued arrest warrants; of them 20 were sentenced to death and 14 to three years imprisonment with hard labour, who are evading arrest. We are verifying the recently released detainees and continuing to document.

On April 27, people across the country remained on the streets to protest the dictatorship despite atrocities of shooting and torturing by the terrorists. Today, anti-military protests and repression escalated in Yangon. Although the coup leader agreed to end violence at the ASEAN leaders meetings days ago. In reality, junta forces have been violating human rights abuses on a daily basis.

Recently, the terrorist group has been cracking down on media and trying hard to cover up the news. This morning, the Mandalay based editor-in-chief of Voice of Myanmar (VOM) and a journalist were arrested. On the night of April 25, a former journalist of the Democratic Voice of Burma (DVB) was arrested and taken to an interrogation center.

According to UDHR Article 19, everyone has the right to freedom of opinion and expression; this right includes freedom to hold opinions without interference and to seek, receive and impart information and ideas through any media and regardless of frontiers. The terrorist group has cut off information flow between the media and public in order to delay access to accurate information.

At the same time, the junta are trying to cover up their violence and  crimes to both international and domestic audiences. It is for those reasons that journalists are being persecuted. At present, the terrorist group is not only openly looting but also kidnapping civilians. Some arrested villagers from Win Kone village, Yinmabin Township, Sagaing Region were released on April 24 only after locals paid junta forces an amount they demanded.

Today, terrorists raided the house of a protest leader in Mogok, Mandalay Region and looted items in the house. Last night, a fisherman was beaten and interrogated by the junta forces in a village that is located in Kangyidaunt Township, Ayeyarwady Region. His old watch and 1000 kyats were confiscated.

On the morning of April 25, the junta forces raided someone’s house who is working for the funeral service society in Myingyan Town, Mandalay Region. They destroyed his house and looted his antiquity collections, money and crafts.

The terrorist regime commits various forms of violence leaving people insecure and fearful mentally and physically. The civilians are facing daily threats and their basic human rights are being violated. The only way to achieve democracy, human rights, and internal peace is not through negotiations but to eradicate dictatorship in Burma.