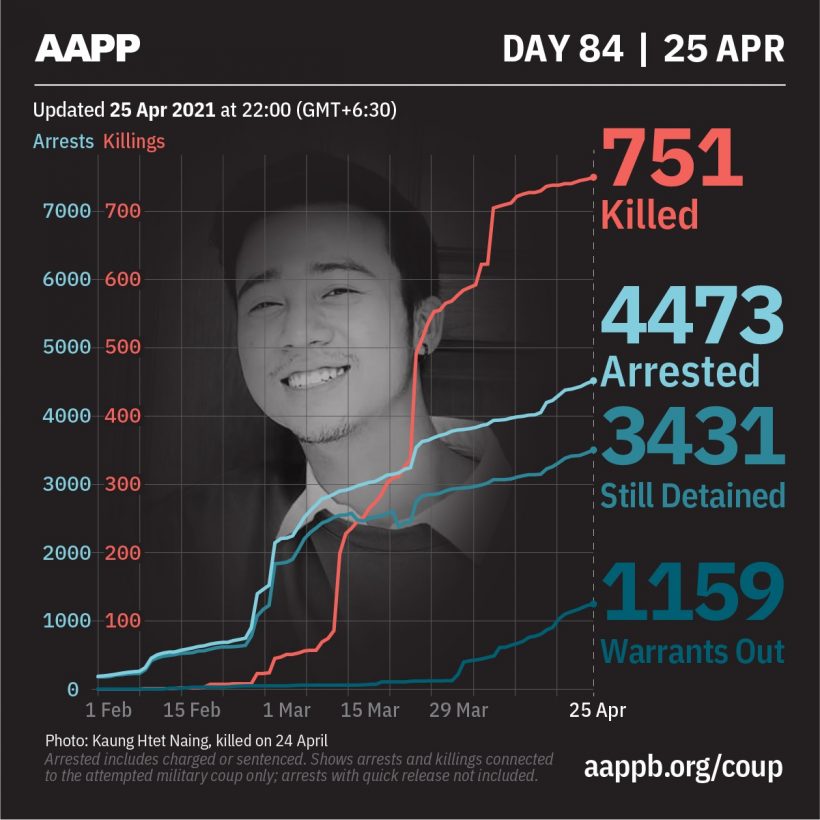 As of 25 April, (751) people are now confirmed killed by this junta coup. The Assistance Association for Political Prisoners (AAPP) compiled and documented (3) fallen heroes today. These (3) fallen heroes from Mandalay City in Mandalay Region, Yesagyo Town in Magwe Region and Myaung Township in Sagaing Region were killed on previous days and documented today. This is the number verified by AAPP, the actual number of fatalities is likely much higher. We will continue adding as and when.

As of April 25, a total of (3431) people are currently under detention; of them (79) are sentenced. 1159 have been issued arrest warrants; of them 20 were sentenced to death and 14 to three years imprisonment with hard labour, who are evading arrest. We are verifying the recently released detainees and continuing to document.

Today, people across Burma continue to protest against the dictatorship in different ways despite intense repression. The ASEAN leaders meeting vaguely asked for an “immediate end to the violence” – it was an unclear and general statement. During the meeting there were discussions and requests, some stern, but the statement does not include what the civilians are asking for – respect for their basic human rights, democracy and peace , neglected in the statement. People in Burma are not asking for humanitarian aid, but for the international community to stand for the truth. The statement does not deter terrorist atrocities against unarmed civilians on a daily basis with both combat zone weaponry.

Yesterday after the ASEAN leaders meeting finished, even on that same day, the terrorist group violated the dignity of civilians including women. Human rights abuses committed openly in public. The statement did not stop the violence against innocents.

Last night in Mayangone Township, Yangon, people ‘banging pots and pans were arrested. They were made to play drums on the streets and the women forced to dance whilst the junta forces openly mocked them. If they stopped playing or dancing they were beaten. The junta troops also threw stones at houses who protested by making noise with pots and metal boxes.

After this, young men were detained and tortured on the road. Assaulting women with weapons who expressed outrage over the immodesty of the public ridicule – the junta treats people like enemies, committing crimes without any restraint. Yesterday in Karen State, at Three Pagoda town, a junta car crashed into motorcycle protesters  and they were shot at 6 times. Five protesters were later arrested in a car crash and one woman was seriously injured.

In Thapyay Aye village, Yinmarbin Township, Sagaing Region the junta came to crackdown the monastery and arrest the head monk. After this they destroyed one building and they seized 20 laptops from the monastery. The terrorist group troops openly loot, but it is being resisted. In order to stay in power, the junta is creating internal unrest. On the evening of April 24, Sagaing Region, in Myaung Township, a woman was arrested and died minutes later from illness, yet it is the detention of innocent civilians which is having these consequences.

Civilians are already suffering on a daily basis through the atrocities of this junta. Compromise or negotiation with the terrorists will not be possible. Compromise will be used to prolong junta rule. Action which does not allow the terrorist to continue committing atrocities must be sought so that innocent civilians suffer no more.