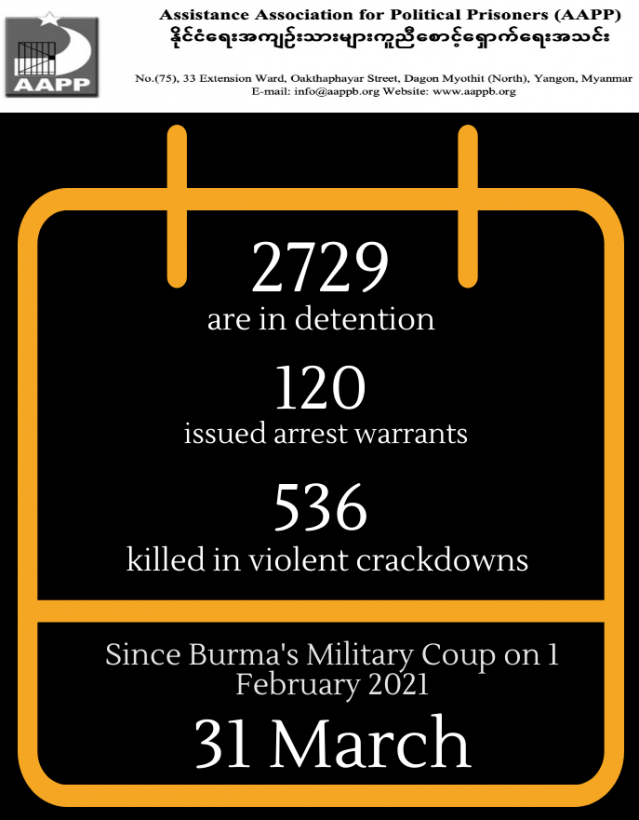 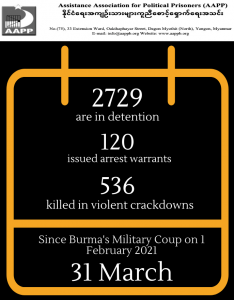 As of 31 March, (536) people are now confirmed killed by this junta coup. The Assistance Association for Political Prisoners (AAPP) compiled and documented (15) fallen heroes today. (2) died on 31 March. (13) were killed on previous days and documented today. This is the number documented and verified by AAPP, the actual number of fatalities is likely much higher as the death toll continues to rise. We will continue adding as and when.

As of March 31, a total of (2729) people are detained in relation to the attempted military coup on February 1, of them (38) are sentenced. A further (120) people have been issued arrest warrants. We are verifying the recently released detainees but are continuing to update the list of names who were released.

Protests across Burma endure. In a crackdown near Nat Chaung village in Kalay township, Sagaing Region, a man was killed by headshot and eight injured. In Kyaukme Town, Shan State, there were no deaths although the strike was dispersed with rubber bullets and tear gas. In Thaketa township, Yangon Region, the junta shot guns prior to the strike and occupied the streets. This morning and afternoon, Yangon seemed calm but by the evening there was brutal violence. The pause in repression coincided with Clarissa Ward, international chief journalist of CNN, arriving in Burma to report on the unfolding situation. However, Clarissa Ward would find it difficult to receive accurate facts because she was followed by many military vehicles and armed soldiers. She would not get permission to report on a violent crackdown, at a concurrent time to the CNN reporters visit, the electricity was cut off in some townships in Yangon. As a result, information flow was also difficult.

There was gunfire last night and two men were reportedly shot dead by the junta forces’ when military vehicles were blocked on the road leading to Kalay town from Gantgaw township, Magwe Region. Moreover, the terrorist forces shot unstoppably into Phawt Kan Ward in Insein township, Yangon Region at midnight today. Not only does the junta torture detainees day after day, but also they commit atrocities onto streets and into houses. Yesterday, junta forces threatened the face of a trishaw driver with a knife, his face was slashed more than an inch and wounds were visible. In Zabu Thiri township in Naypyitaw, a man was arrested on March 15. Yesterday it was reported his body was buried by the military and not returned to the family, who could visit the cremation but which was heavily controlled by the military. Intending to hide the injuries from torture is yet another serious violation of international law.

Although it is a fundamental right to go on strike against a government and authorities should prevent torture, in Burma there is no such protections from torture since the illegitimate coup attempted by this terrorist junta. The junta raids safe zones, at about 2am today, Tat Lan Hospital in South Okkalapa township, Yangon Region, was raided and the staff beaten with police batons, kicked by military boots, slammed and punched. The junta perpetrators destroyed CCTV records in order to delete their criminal activity.

Some Ethnic Armed Organizations (EAOs) have now made statements against the coup. Consequently, clashes in ethnic regions have reignited, particularly so in Kachin and Kayin States. Residents there have been forced to flee from their homes and some were injured and even killed. During these times, the coup junta is taking the offensive with air strike bombings in KNU controlled areas. Six villagers from Htee Fado village in Saw Hti township, Nyaunglebin District, Bago Region were killed and a house in Khat Pe Khee village in Hpapun District, Karen State, burnt down. Moreover, Me Wine village was reportedly scattered with air strike bombings. In the current situation, the local residents including elderly people, those in ill health and children are forced to flee from their homes and villages and hide in the forest. They then face starvation and lack of medical treatment, villagers fleeing across borders face many further difficulties also.

Amid a decades-long civil war, local ethnic people struggle to survive extreme human rights violations, peace is consumed by coup after coup, many lose their lives and livelihoods due to these conflicts. The fruits of peace can only be achieved if the military dictatorship ends.

On 29 March F.W. De Klerk penned a letter on behalf of 45 former leaders and foreign ministers from around the world addressed to the UN Secretary General. The letter implored action to bring the atrocities by this junta to an end, to invoke “Article 99 to call for an immediate formal meeting of the Security Council, as well as to urge the Council to invoke the principle of Responsibility to Protect”. Former Australian President Kevin Rudd told media outlets, “we don’t have any other card left to play, that’s the bottom line”. Russia and China can easily block R2P but they must be reminded what this junta is capable of. This junta perpetuates mass atrocities, including ethnic cleansing, the UNSC members would have supported the juntas’ present and future crimes against humanity if they do not act.