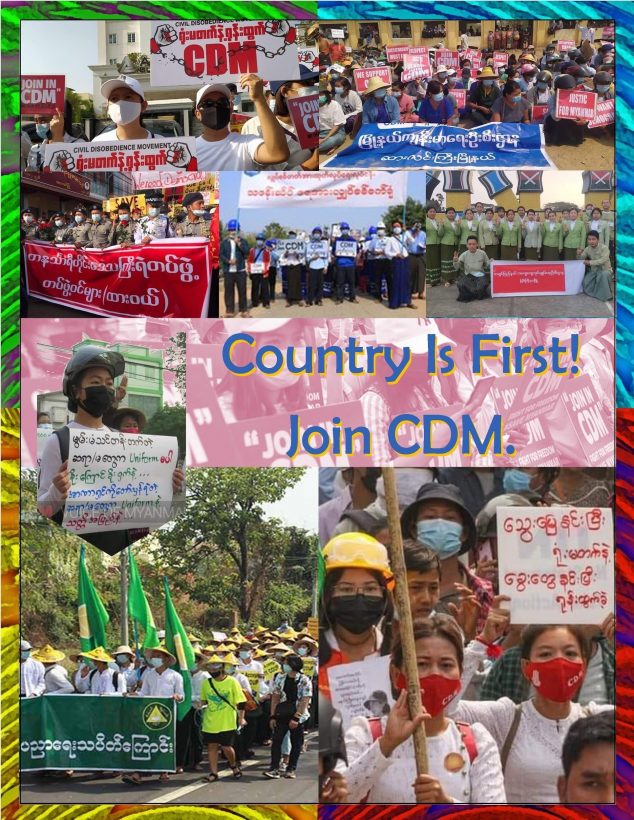 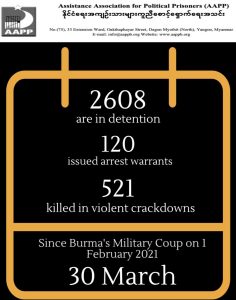 As of 30 March, (521) people are now confirmed killed by this junta coup. The Assistance Association for Political Prisoners (AAPP) compiled and documented (11) fallen heroes today: (8) died on 30 March, (3) were killed on previous days and documented today. This is the number documented and verified by AAPP, the actual number of fatalities is likely much higher as the death toll continues to rise. We will continue adding as and when.

As of March 30, a total of (2608) people are detained in relation to the attempted military coup on February 1, of them (37) are sentenced. A further (120) people have been issued arrest warrants. We have not completed verification of all recently released detainees over the last 6 days, but are continuing to update the list of names who were released.

The junta is committing atrocities every day in many townships, South Dagon township in Yangon Region was the scene of particularly severe violence, with many killed and injured by so-called police and military. People made barricades to defend themselves from arbitrary gunfire into streets, wards and houses. The town had been raided and shot at by large numbers of junta troops since the barricades were broken down by grenades, launchers and heavy weapons last night (March). People’s cars and houses are being destroyed. They force detained youths onto both hands and kneel down, they set the detainees as targets for snipers from high apartments, then threaten the strikers “if you don’t come and save their detainees, they will be shot and killed”. In South Dagon last night dead bodies and injured people were taken away so it is difficult to collect accurate data. The number of the victims will increase. The junta raided Sanpya Hospital but also private and public hospitals, many lost the right to treatment because of this, the junta prepared to arrest the patients in advance. Pinnya Alin Library which provides treatment to injured people was violently destroyed by them this morning. Patients were insufficiently treated, and died from lack of adequate medicines.

In South Dagon’s violent crackdown last night, a civilian was burnt to death. This brutal act followed the burning to death of a community guard in Mandalay. Today, two civilians were killed by gunshots in initial reports and the terrorist junta forces took away the body.

In defiance to brute violence by the junta group, the strikers protest peacefully across Burma. Today, civilians were reportedly murdered and some wounded and arrested because of arbitrary shooting, raids and crack-downs in Bago and Pyay in Bago Region, Mandalay City, Kawthaung in Tanintharyi Region, Muse in Shan State and Myitkyina in Kachin State in addition to South Dagon in Yangon Region.

Even though the illegitimate military regime shoots and threatens people who fight for democracy, including participating in the civil disobedience movement (CDM), the anti-coup movement is continuing without fear.  In the absence of such fear, the terrorist regime carries out murder, by burning alive, torturing, and other brutal methods of violence day after day, and creating a climate of fear among the people. Last morning, while a student from Bago University and a youth were riding a motorcycle, they were shot and fell on the ground and dragged into the monastery by the military and so-called police. In the evening, the family of the student was informed that the student died and another one was shot in the abdomen is in critical condition. In Ai Yay Ward, Myit Chay Town, Pakokku Township, Magwe Region, four men were arrested on March 28, and two of them were reported dead yesterday. Two dead men were reportedly tortured and their bodies not returned to their families. On March 27, CCTV footage showed three youths riding a motorcycle near Dawei High School No. 3, they were fired on by an unmarked car driven by junta forces, and one of them was hit and he was taken by the junta. The father was informed that he was being treated at a military hospital, but Kyaw Min Latt (aka) Ko Pho Tote, 17-year-old, died this morning. His death certificate issued by the military hospital revealed fake news that he had fallen off a motorcycle and suffered serious head injuries.

In no country should a detainee be tortured. Torture is a serious human rights violation, but in Burma, detainees are forced to confess using torture, it is routinely practiced by the junta regime. As long as the military dictatorship is not eradicated, the people will continue to face such life-threatening conditions in various ways.

AAPP will continue to keep you informed of verified daily arrests, charges, sentences and fatalities in relation to the attempted coup, and update our lists to the details of these alleged offences. If you receive any information about detentions of, or charges against CSO leaders, activists, journalists, CDM workers and other civilians in relation to the military and police crackdown on dissent. Please submit to the following addresses:.