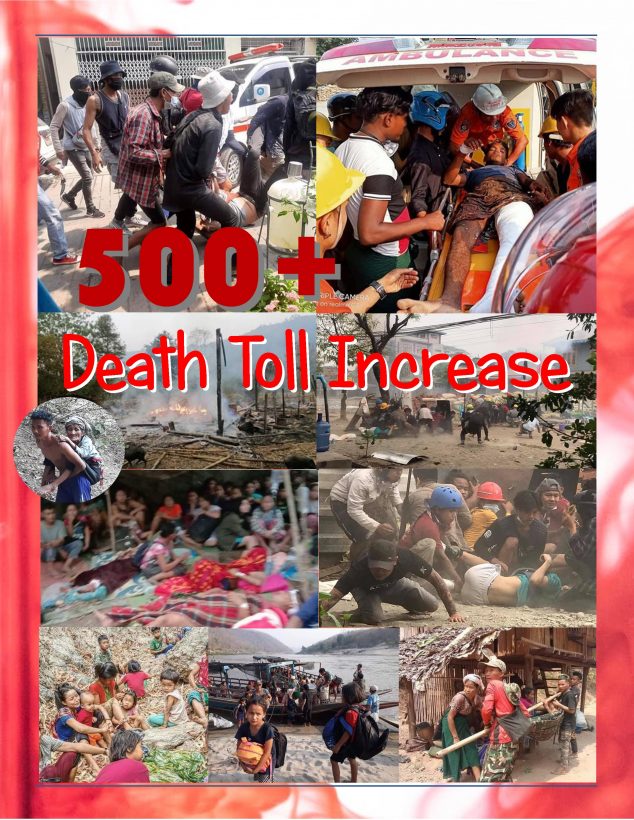 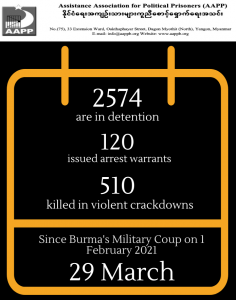 As of 29 March, (510) people are now confirmed killed by this junta coup. The Assistance Association for Political Prisoners (AAPP) compiled and documented (51) fallen heroes today: (14) shot to death on 29 March and (37) were killed the previous days. Children, students, youths and civilians have all been killed since the coup.. This is the number documented and verified by AAPP, the actual number of fatalities is likely much higher as the death toll continues to rise. We will continue adding as and when.

As of March 29, a total of (2574) people are detained in relation to the attempted military coup on February 1, of them (37) are sentenced. A further (120) people have been issued arrest warrants. We have not completed verification of all recently released detainees over the last 5 days, but are continuing to update the list of names who were released.

As people continue to oppose the dictatorship 57 day and nights now, junta repression against peaceful protests deteriorates in their attempt to govern the economy and over society. On March 29, there were unprovoked shootings into houses and wards, the death and injury toll is rising. Today, in Thaketa, South Dagon and Thanlyin Townships, Yangon Region; Taungoo Township, Bago Region; Myingyan City, Mandalay Region, Monywa City, Sagaing Region; Pathein City, Ayeyarwady Region; Myitkyina, Kachin State and Taunggyi and Muse, Shan State, there have were crackdowns and shooting in many wards, people were killed and many injured. More than 20 people have been arrested.

It is also known that today the military junta opened fire on people who went to a funeral for those fallen heroes yesterday in Taunggyi.

Irrepressible shooting in South Dagon midnight yesterday resulted in two men being killed, one of them shot dead in the head. The other was hit in the thigh by gunshot, he could not run away due to injury, so the military and so-called police detained and threatened those who came to help the victim. The junta forces screamed obscenities and randomly shot at anyone trying to help. Then the junta troops shot the injured victim to death and left. Furthermore, a one and half year old toddler was shot to his ear in South Dagon. Shooting a person to death who was down and defenseless and shooting children to death, this terrorist coup group orders its forces to commit crimes against humanity. It is demonstrated they violate the daily pledge they recite everyday to protect groups in need of protection

Amidst crackdowns in Kyauk Myaung, Tamwe township, Yangon Region, people banged pots and pans in protest. At that time, the junta forces told people they will arson neighborhoods if people continue. In Sanchaung township, the police directed slingshots and  sticks into these publicly known apartments.

The terrorist group uses torture every wherever it goes. In Kywe Kuu village, Myeik in Tanintharyi Region, the dead body of one of two men disappeared for over three days was taken by the military. The remaining man was beaten into critical condition by the military.

Since 27 March the junta has attacked zone in Hpapun District, Karen State, using fighter planes and bombs. Around 10,000 residents from seven villages were forced to flee their homes.

These atrocities are being widely followed in the international community, but a coordinated strategy is needed to end the coup. In a powerful joint statement by Alice Wairimu Nderitu, United Nations Special Adviser on the Prevention of Genocide, and Michelle Bachelet, the High Commissioner for Human Rights, on 28 March. The two called for “an end to systemic impunity in Myanmar”. To this end, AAPP supports the recent Special Advisory Council of Myanmar demands for a global three-cuts strategy against the junta, to “cut the weapons, cut the cash, cut the impunity”. This will include a comprehensive arms embargo with mechanisms to monitor and enforce it; targeted financial sanctions against generals and all military-owned companies and subsidiaries; and refer the coup and violence to the ICC.