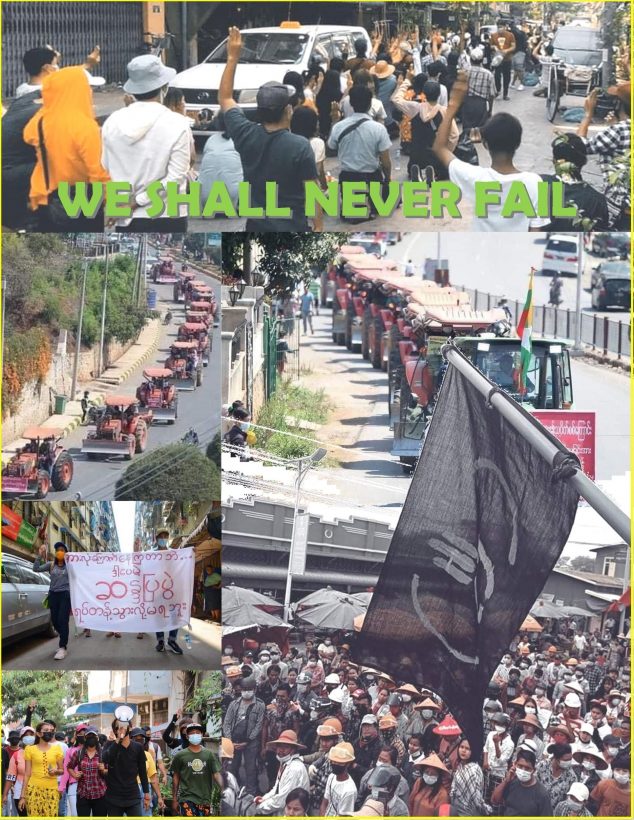 Today, the Assistance Association for Political Prisoners (AAPP) has compiled and documented (2) heroes. Of these, (1) was shot dead on the spot in Monywa City, Sagaing Region and (1) in Yangon also died after dropping from a fifth floor to the ground. (1) was killed on a previous day but added on 21 March. (250) people are now confirmed killed by this junta coup. This is the number documented and verified by AAPP, the actual number of casualties is likely much higher. We will continue adding as and when.

In today’s detainee list, we received and documented the names of (320) people. However, more were arrested today, AAPP will continue investigating these and make appropriate announcements when.

Despite many fallen heroes lost due to the violent crackdown on peaceful protesters by the military, many still protest risking their lives. On March 21, all kinds of strikes in rejection of the brutality of the military junta continued. Today, the crackdown was severe in Monywa City in Sagaing Region, one man was shot dead in the head and three civilians were injured when people protested the police and soldiers destroying barricades, and then fired live ammunition. At Aung Pin Lal in Chanmyathazi in Mandalay, some people were injured and some arrested as the police and soldiers fired rubber bullets and live rounds.

Due to threats from the military junta, local farmers are fleeing their homes. Thousands of people from five villages in Sagaing Region’s Depayin Township fled their homes after the military vowed retribution against those involved in the killing of two police members and injury of a police captain on March 18.

The junta keeps suppressing CSOs, philanthropic services and volunteers, the office of the We Love Yangon was broken into, smashing doors and furniture, and the accessories of the office were destroyed and looted today. The raid was so panic-stricken that a 35 year old woman, who tried to sneak out through the fire-escape, dropped off from the fifth floor onto the ground, heavily cutting her head and died. Today, Daw Shwe Hmone, chairperson of Thukhakarri social service association and her two associates were captured on their way to offering some help to people of Hlaing Tharyar Township who face difficulties.

Yesterday night, Mingalar Htun Thiri Cinema Hall building was broken into and doors smashed  in a raid, the manager of the cinema was arrested because he opposed the reopening of the cinema. Some houses in front of the cinema were fired with slingshot and threatened.

So-called police and soldiers often resort to brutal beatings during arrests, it is their policy. Today, in Taunggyi Townshp, Shan State, police stormed Yadanar Thiri ward and a youth was abducted and severely beaten by a group.

The military junta is committing crimes against humanity, of stealing, looting, murder, hiding bodies all over downtown areas. It is terrorism and we urge the international community, including ASEAN, to take immediate action.