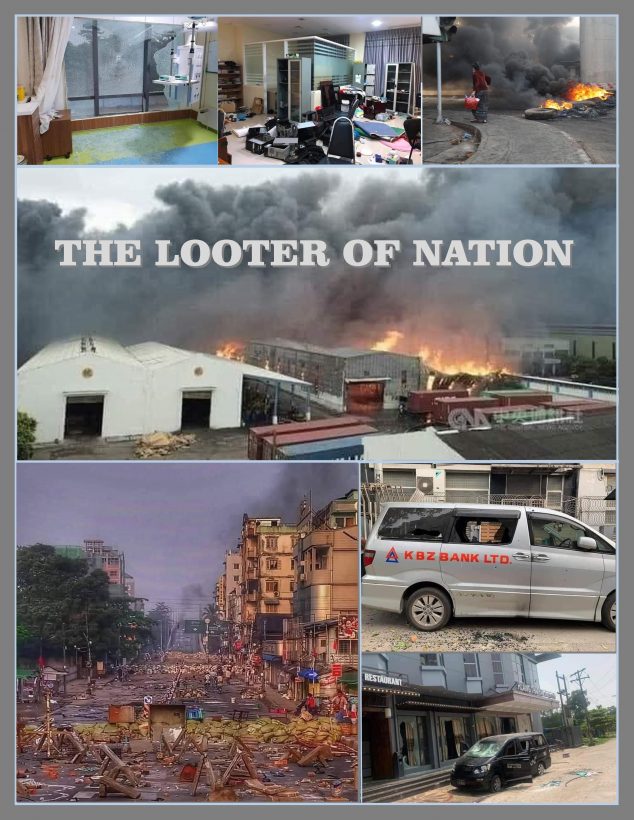 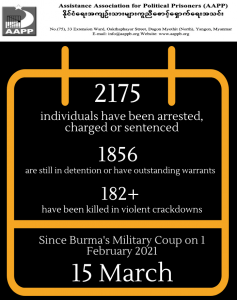 AAPP would like apologise to our readers. A previous image in our poster for 15 March Daily Briefing had been photoshopped by an external source. AAPP has since replaced this image. We strive to always show our readers authentic photos.

The Assistance Association for Political Prisoners (AAPP) honors the heroes who sacrificed their lives and liberty to fight for democracy, human rights and the end of dictatorship. AAPP also honours those heroes who sacrificed their lives today. Up until now, (183) people have been  added. (74) people including in Hlaing Thar Yar Township and different regions were killed on March 14, and at least (20) people were killed today. Casualties are drastically increasing.

As of March 15, a total of (2175) people have been arrested, charged or sentenced in relation to the attempted military coup on February 1. Of them, (3) were convicted; (2) to two years imprisonment, (1) to three months. (73) have been charged with a warrant and are evading arrest, (319) were released. A total of (1856) are still under detention or have outstanding charges/evading arrest, including the (3) sentenced.

In today’s detainee list, we received and documented the names of (19) people. However, approximately 100 protestors including students and youths were arrested during the crackdown across the country today. We will continue to investigate these and make appropriate announcements when.

It has been 39 days since peaceful protests erupted against the attempted coup across Burma on 4 February. Momentum is growing as the people join together in the protest and civil disobedience movement. The Committee Representing Pyidaungsu Hluttaw (CRPH) is gaining more recognition and cooperation internationally, whilst the junta is continuing to attempt to seize power in a coup through violent means. People in Burma live in danger of their lives, security and dignity. Brutal crackdowns by junta forces beginning on 9 February have intensified day after day.

Yesterday on 14 March, was the most violent day since the coup with huge numbers of casualties. Numerous children were killed, three under-18s, including a 15-year-old girl. Crackdowns with live ammunition even at nights have increased the death and injury toll. Yesterday, the terrorist SAC junta announced Martial Law in six townships in Yangon region (Shwe Pyi Thar Township, Dagon Myothit (South) Township, Dagon Myothit (North) Township, Dagon Myothit (Seikkann) Township and North Okkalapa Township) including Hlaing Thar Yar Township which has encountered the severity of the violence. 23 sections and articles of a repressive legal framework are hence now under the jurisdiction of a military tribunal in these townships. Martial law gives military command over residential areas and civilian homes. It frees them from any semblance of restraint in their brutality towards the peaceful protestors.

The people are enduring the terrorist junta forces, it was live ammunition this morning. As of confirmed AAPP documentation 20 civilians have already been shot and further confirmation of the fallen heros across Burma is continuing. AAPP has also documented the killing of ordinary people not even participating in  the protests. As far as updated information for today:

The junta has also shut down mobile internet connection across the country since last night, cutting off electricity in some townships. These human rights violations and violence could be worse during the darkness of night without online communication, it also intends to weaken the people coordinating to strike.

Urgent protection for Burma’s people is desperately needed. A shrinking democracy and military dictatorship gripping one country can have a snowball effect on the region. AAPP urges ASEAN countries to take direct action and for the international community to urgently halt the inhumanity of the terrorist SAC group.