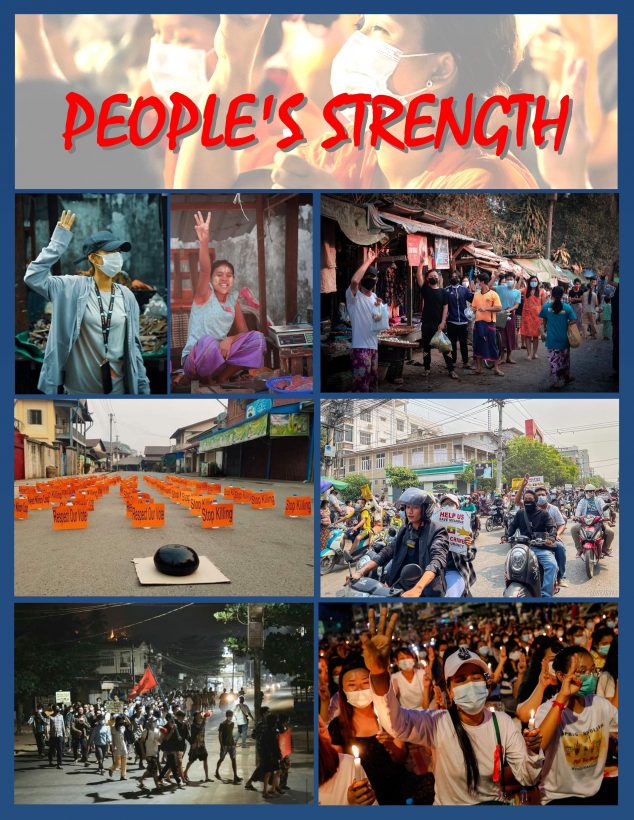 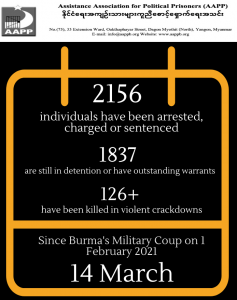 The Assistance Association for Political Prisoners (AAPP) honors the heroes who sacrificed their lives and liberty to fight for democracy, human rights and the end of dictatorship. AAPP also honours those heroes who sacrificed their lives today. Up until now, (126) people have been killed due to violent and arbitrary crackdowns, at least 38 today. Further casualties will be added when confirmed, casualties are drastically increasing.

As of March 14, a total of (2156) people have been arrested, charged or sentenced in relation to the attempted military coup on February 1. Of them, (3) were convicted; (2) to two years imprisonment, (1) to three months. (73) have been charged with a warrant and are evading arrest, (319) were released. A total of (1837) are still under detention or have outstanding charges/evading arrest, including the (3) sentenced.

In today’s detainee list, we received and documented the names of (23) people. However, approximately 100 protestors including students and youths were arrested during the crackdown across the country today. We will continue to investigate these and make appropriate announcements when.

In Hlaing Thar Yar, Yangon, many of the people were killed and injured  by large numbers of junta forces and became like a battlefield. As per the current confirmed documentation, 22 civilians died and more than 20 wounded, three are in critical condition in that township. Junta forces did not leave the streets and wards and they violated and arsoned neighborhoods. In South Okkalapa, a civilian is in serious condition due to being shot. In Shwe Pyi Thar Township, one civilian died and more than four were injured. In Tamwe Township, a youth who was shot near Tamwe Police Station and dragged into the station by the so-called police died, many more are reportedly wounded. In North Okkalapa Township, one youth died and two injured due to shots by live rounds and one is in serious condition. In Thingangyun Township, six civilians died and nine were severely injured by gunfire. In South Dagon, two died and over ten people were injured. In North Dagon, the night strike was cracked down by the junta forces, causing a youth to die and four protestors to be severely wounded.

A similarly extreme crackdown occured in Bago resulting in two deaths (including one woman) and 19 injuries. The woman died on the spot from headshot. The junta forces threw this body into a ditch, covered with rubbish then left, said the residents. In Mandalay, a woman was shot dead with a real bullet in her cheek. Moreover, as is reportedly known, at least six were injured by rubber bullets. In HpaKant, a civilian was shot dead in his chest, five others are reportedly severely injured.

Protests in Insein and Sanchaung Townships in Yangon region, Myitkyina in Kachin State and Taunggyi in Shan State were brutally cracked-down using rubber bullets, tear gas and sound grenades. What is more, factories and departmental offices were arsoned by the junta forces in some townships including Hlaing Thar Yar in Yangon Region. The perpetrators created it so it seemed the public set fire. Though these fires were reportedly extinguished by the public.

Today, a statement by Committee Representing Pyihtaungsu Hluttaw (CRPH) announced that the general public has the right to lawfully defend themselves from the junta’s violations. Legal counter-defence by individuals, ward and township community groups are not criminal. This statement was released after caretaker Vice-President Mhan Win Khaing Than declared a State of the Nation Address regarding these rights. AAPP welcomes the CRPH statement.