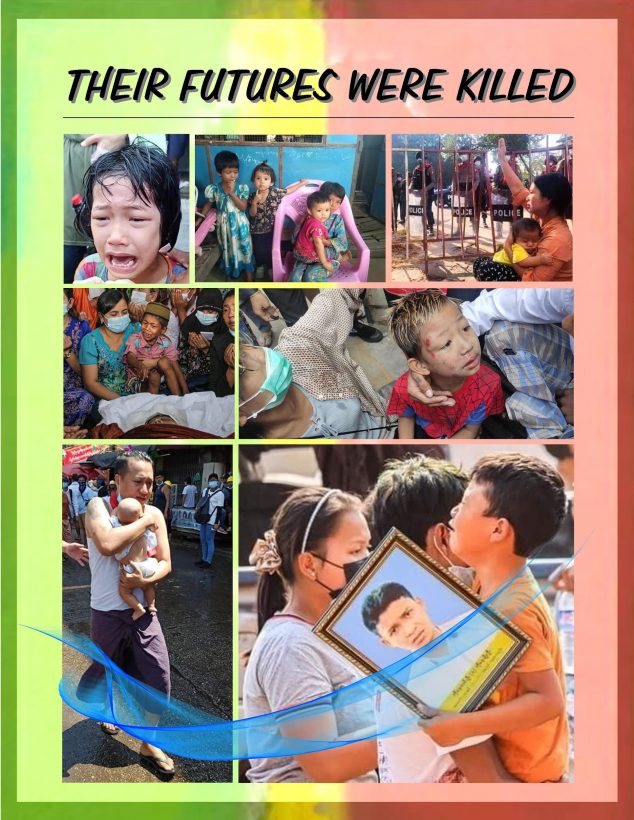 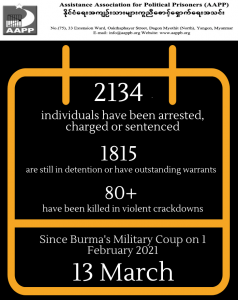 As of March 13, a total of (2134) people have been arrested, charged or sentenced in relation to the attempted military coup on February 1. Of them, (3) were convicted; (2) to two years imprisonment, (1) to three months. (73) have been charged with a warrant and are evading arrest, (319) were released. A total of (1815) are still under detention or have outstanding charges/evading arrest, including the (3) sentenced.

In today’s detainee list, we received and documented the names of (42) people. However, approximately 100 protestors including students and youths were arrested during the crackdown across the country today. We will continue to investigate these and make appropriate announcements when.

Following the UN Security Council unanimous calling for the junta to cease the violence, yet day and night they brutally crackdown, deaths are escalating. The SAC group is flagrantly disregarding the international statements so far. But the peaceful demonstrations by courageous people across Burma are persistent.

Today innocent civilians, including students and youths were killed in continuous live rounds shooting in Mandalay City, Pyay Town, Bago Region, Chauk in Magwe and Twantay Township in Yangon Region. Protesters including monks and women, who had been staging a peaceful sit-in protest in Mandalay since the morning, were fired upon with live ammunition, resulting in 4 people (2 women and 2 men) dying from head shot and 10 people getting serious injuries including 3 were shot on lower part of the body. The death toll could rise as serious injuries are being treated. Nearly 40 people were arrested and the security forces which are ongoing as of publication. In Chauk City, juna forces fired tear- gas grenades, rubber bullets and live rounds in the downtown residential area, resulting in 1 man dying from neck shot and 13 were arrested. In Pyay, two youths were killed and four others were seriously injured when a student union protest near Pyay University was cracked down with live rounds. In Twantay Township, 2 civilians were killed and 9 others were injured.

The junta is perpetuating raids, firing guns, and arbitrarily arrests during the night. Demonstrations have also expanded to during the night, sit-in protests in Mingalar Taung Nyunt, Hlaing Thar Yar, Hlegu townships in Yangon region, Pathein in Ayeyarwady region, Tataoo in Mandalay region were repressed using live ammunition causing one under-aged child to be wounded by rubber bullets. In Tataoo Township, five tear gas and 28 live rounds were recorded and two civilians were hit by rubber bullets. Also in Hlegu township, one civilian was injured with rubber bullets.

Last night, junta forces raided a house, beat and arrested three brothers living in Tharkayta Township. Thus, when the people demanded their release, sound grenades and live ammunition fire coming from the police station led to the deaths of two men and injury of three others. Last night, quarters in Moggok, Mandalay region were raided by large numbers of junta forces resulting in five community guards being arrested and one wounded. In Paungte, Pegu Region, the terrorist junta shot towards a crowd praying for the fallen heroes and some were arrested. In Yangon, Hlaing Township, raids against a MP Hluttaw house then escalated to firing gunshots and sound grenades into streets. Consequently, a youth died. The junta forces also destroyed private and public properties. One Stop Super Market at the edge of 39th Bogyoke Street was also badly wrecked.

So-called police and the military under the coup regime have continued to arbitrarily assault and arrest children. Yesterday, children under the age of 18 were violently beaten and arrested by the military and so-called police at 49 street, Mya Yi Nanda Housing, Mandalay. In Thingangyun Township, Yangon, a child who was going to buy snacks was abducted and beaten and released after. Myanmar has ratified the United Nations Convention on the Rights of the Child (CRC), we strongly condemn such acts of violence against children.

As is reportedly known, some of the detainees in Yangon are placed in a military prison in Shwe Pyi Thar township. However, medicines, food and such that are allowed for prisons are not given in that military prison.  This lack of transparency is of grave concern for these political prisoners lives, access to food, living conditions, and especially their health. As successive military dictators have used various means to torture their opponents, it is worrying not knowing the real situation of them.