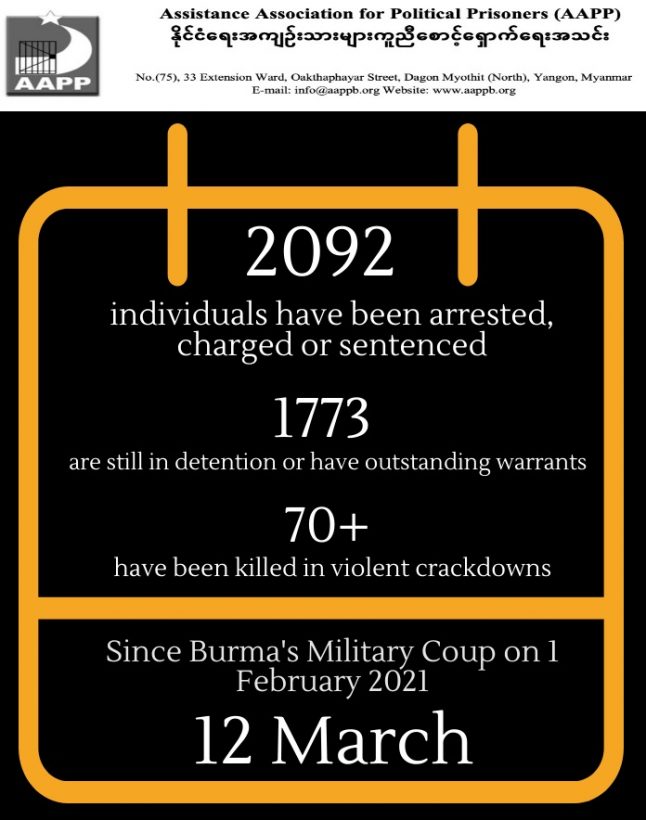 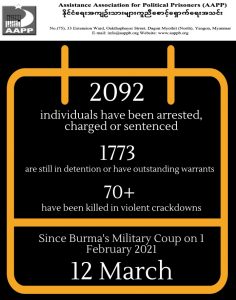 The Assistance Association for Political Prisoners (AAPP) honors the heroes who sacrificed their lives and liberty to fight for democracy, human rights and the end of dictatorship. Up until now, more than (70) people have been killed due to violent and arbitrary crackdowns.

As of March 12, a total of (2092) people have been arrested, charged or sentenced in relation to the attempted military coup on February 1. Of them, (3) were convicted; (2) to two years imprisonment, (1) to three months. (73) have been charged with a warrant and are evading arrest, (319) were released. A total of (1773) are still under detention or have outstanding charges/evading arrest, including the (3) sentenced.

In today’s detainee list, we received and documented the names of (47) people. However, approximately 100 protestors including students and youths were arrested during the crackdown across the country today. We will continue to investigate these and make appropriate announcements when.

Today, a US Embassy officer visited Kamayut Township Court, Yangon and spoke to media and democracy supporters concerning the 5 recently arraigned journalists there. This follows similar support by the French Ambassador outside Insein on 10 March. The US administration announced targeted sanctions against two military relatives, but AAPP urges a systematic broadening of sanctions to include all military and civilian pro-coup businesses. This call was reiterated by the Special Rappateur yesterday who highlighted the intentional pattern of arbitrary detentions, looting, torture and  killings by this junta – the terrorism. Speaking to the UN Human Rights Council Tom Andrews also supported the case the military has and will continue to perpetrate crimes against humanity. He agreed the crimes are: coordinated, not isolated, directed at unarmed civilians, widespread, systematic, and ‘ordered from above’, recommending five immediate steps to be taken, which AAPP supports in order to take more effective action against the SAC junta.

Junta’ forces continued these violations into the night, they raid houses, open gunfire, and destroy public property to continue creating a climate of fear. The brutal assaults are being carried out  particularly in cities where they have intensified. Last night at around 9:35pm in Kyat Sar Pyin Quarter, Dawei Township, the military and so-called police gun fired with live ammunition and one who got seriously injured was in critical condition died, and two others were injured. In the Mya Thida Quarter, Mingalardon Township, Yangon Region, at around 1am on 12 March, the SAC junta forces raided and opened fire with live ammunition and one civilian died, whilst another one who was night watchman was shot trying to hide, then taken outside and shot dead, his dead body was then taken by the military and so-called police. 5 civilians were injured in the incident. Moreover, last night in the Shan Wyne Quarter, Mandalay, around 200 soldiers came and fired slingshots and gunshots into houses and destroyed public properties. Residents were then intimidated the junta forces would arson all their houses next time.

The houses of MPs have been raided every night and were last night as well in Monywa township, Regional Hluttaw MP Daw Aung Kyi’s house was stormed and searched without permission, they took away a laptop computer and CCTV hard disks. The junta forces then came to arrest Mhan Aung Ko Min, Regional Hluttaw (1) MP , living in Mhan Ka Late village in Kungyangon Township, Yangon Region. Villagers from Takhun Tine village adjacent to Mhan Ka Late village, then signaled by banging the pots. Then that village was raided and a man was hit with seven rubber bullet shots. U Htay Naing, Chairman of NLD in Nga Pu Taw town, Pyin District, Ayeyarwady Region was arrested today.

Civil servants participating in CDM are also severely oppressed. At about 11pm last night, large numbers of junta forces searched for ward administrators participating in CDM in ward (6) and (8) of Tharkayta Township and continuously shot their guns and sound grenades even within narrow streets. In Kayah State, the Rectors of Technological University (Loikaw) and Computer University (Loikaw) and the Principal of Governmental Industrial Science (Loikaw) were detained and charged under Penal Code Section 505(a) due to public objection to a junta base within the university campuses.

The junta group has evidently not stopped repressing domestic and international media. Yesterday, a Polish photojournalist, Robert Biciaga, was beaten when he was reporting on events and is currently detained.