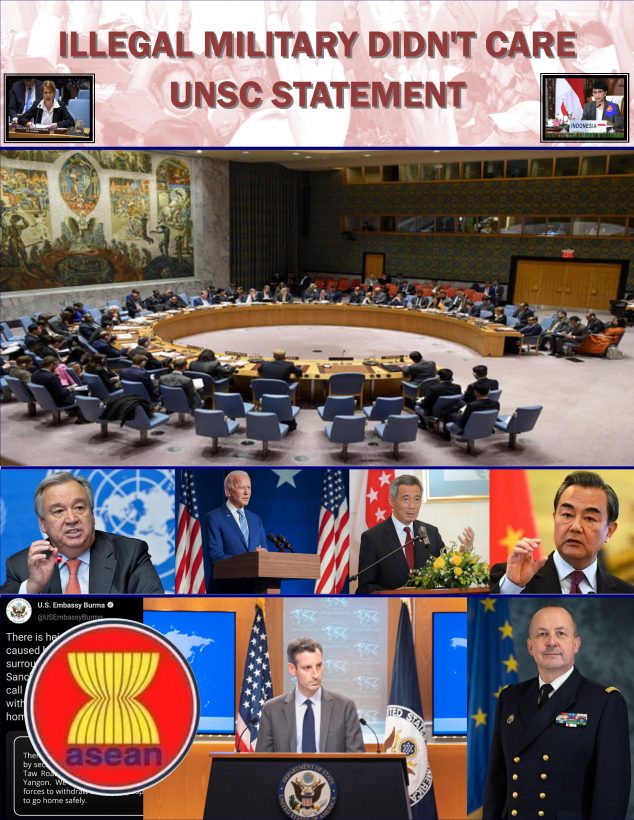 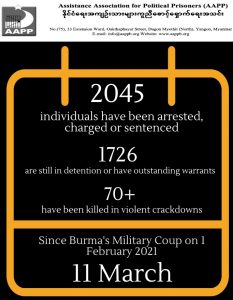 The Assistance Association for Political Prisoners (AAPP) honors the heroes who sacrificed their lives and liberty to fight for democracy, human rights and the end of dictatorship. Furthermore, AAPP honors the twelve heroes who sacrificed their lives today in Dagon Myothit (North) Township, Yangon Region, Bago Township, Bago Region, Mandalay and Myingyan Township, Mandalay Region, Monywa Township, Sagaing Region and Myine Township, Magway Region. Up until now, more than (70) people have been killed due to violent and arbitrary crackdowns.

As of March 11, a total of (2045) people have been arrested, charged or sentenced in relation to the attempted military coup on February 1. Of them, (3) were convicted; (2) to two years imprisonment, (1) to three months. (73) have been charged with a warrant and are evading arrest, (319) were released. A total of (1726) are still under detention or have outstanding charges/evading arrest, including the (3) sentenced.

In today’s detainee list, we received and documented the names of (37) people. However, approximately 200 protestors including students and youths were arrested during the crackdown across the country today. We will continue to investigate these and make appropriate announcements when.

On March 10, the UN Security Council issued a statement saying it strongly condemned the violence against peaceful protestors, including women, youths, and children. Calling for the  immediate release of all detainees, including State Counselor Daw Aung San Suu Kyi and President U Win Myint who were arbitrarily arrested. The day after the announcement, the junta  went on to brutally repress the peaceful protests.

It was particularly so in Myaing, a small town, which holds daily peaceful protests, where there was a brutal crackdown by the military and so-called police. This morning, people in Myaing held a meeting at the Monk Sandimar’s Monastery and decided not to boycott. While they were waiting for the villagers from villages to arrive, the military and so-called police arrested two youths at the entrance of the monastery. When they asked to release these two youths, the junta forces blocked them both sides and opened live bullets and tear gas. 6 people were shot to death and many injured. In the evening, two of the injured died. Two others were transferred to Monywa Hospital because Myaing Hospital was not able to treat them. It is reported these two people have died but it has not yet been confirmed. Most of the people who died were shot to the head.

In Dagon Myothit (North) Township, one youth was shot dead in the head and 4 others were injured, including one who is in critical condition. In Mandalay, during the crackdown on a Mya Taung protest, one youth was shot and killed and his dead body was taken by so-called police, and two were injured and 28 were arrested. In Bago Township, one disabled person was shot dead in the head and another one was injured. Moreover, railway staff and teachers who joined in the civil disobedience movement (CDM), and youths were arrested. In Myine Township, seven peaceful protestors were shot dead and eight others injured. In Myingyan Township, one youth who was shot near the eye yesterday and left in critical condition died today. During the crackdowns, the military and so-called police shoot at targets and display their inhumanity and intention to kill.

The junta’s so-called police and military have been committing these operations using brutal repression of peaceful protests on a daily basis in order to retain power. Today, peaceful protests across the country continued to gather momentum but as did crackdowns and casualties. There are atrocities and violations of human rights and peoples dignity on a daily basis. Diplomatic negotiations, economic sanctions, and condemnations have so far not taken effective action on the current situation for people in Burma. Powerful action must be taken against the junta for committing these crimes against humanity day after day.

Currently, the safety and rights of peaceful protestors and detainees is a matter of grave concern. On March 3, the military and so-called police brutally cracked down on the All Burma Federation Student Union (ABFSU) protest and arrested students and youths, including Ko Wai Yan Phyo Moe, vice-chairman of ABFSU. Ko Wai Yan Phyo Moe is reportedly in a life-threatening condition. In Insein Prison, women are being forced to kneel all night and are being tortured in other ways, especially students, according to the ABFSU’s social media site.

On March 10, the coup regime issued a surprise guest check order. This order further restricts the connection between the community and protesters. Nowadays, anyone in Burma can face the risk of arrest at any time.

On March 11, the military junta removed the Arakan Army (AA) from its list of “terrorist” groups. There have been almost two years of fighting between the military and AA. Leaving many killed, injured, arrested, charged or sentenced due to clashes. 200,000 locals have been displaced due to the conflict.