Home > Blog > Statement of Opinion Regarding Definition of Political Prisoners

Statement of Opinion Regarding Definition of Political Prisoners 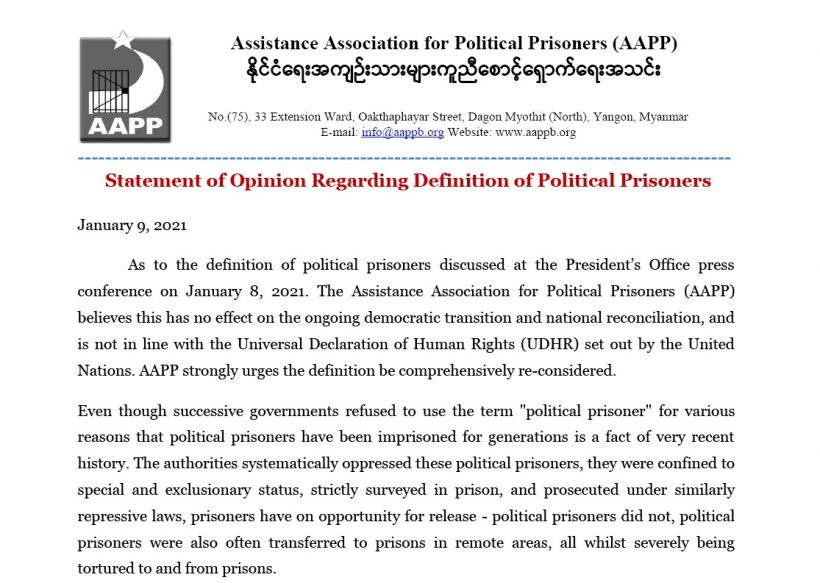 As to the definition of political prisoners discussed at the President’s Office press conference on January 8, 2021. The Assistance Association for Political Prisoners (AAPP) believes this has no effect on the ongoing democratic transition and national reconciliation, and is not in line with the Universal Declaration of Human Rights (UDHR) set out by the United Nations. AAPP strongly urges the definition be comprehensively re-considered.

While AAPP has been working and fighting more than 20 years in various ways; for national reconciliation, human rights, equality, democracy, tackling the power of the dictatorship, and for recognition of those arrested and imprisoned as political prisoners. At the same time, we constantly tried to work with internal and external actors to prevent torture in prisons and to ensure the full rights prisoners deserve.

In 2014, political parties including the National League for Democracy (NLD), organizations working on political prisoner issues, legal experts and individual representatives collectively discussed and adopted a definition of a political prisoner as closely as possible.

At the press conference on January 8, 2021, it was stated “the political prisoners are those who have been arrested, prosecuted and punished for protesting freely in accordance with the law for political beliefs”. This is the same definition declared by the Union Minister of the Myanmar State Counsellor Office in June 2016, it is therefore the likely opinion of the current government.

The UDHR enshrined the protection of the inherent rights and freedoms of all human beings. The right to freedom of expression must be protected by law, as well as existing laws, by-laws and regulations in Burma much in need of reform. Efforts are being made to revise and amend these laws by this current government.

Under the current elected government, the notorious Sections 5 (j), 10 (a)(b) of once upon a time were abolished. Over 300 remaining political prisoners were released, it was then no longer the case that if convicted again, the remaining sentence would be added to any new charge. These were fully welcomed as positive contributions to democratic change.

However at present, we sadly find laws such as the Peaceful Assembly and Peaceful Procession Law and Civil Rights Protection Law, enacted to ensure the rights of the people, actually used to arrest and prosecute ordinary people. Furthermore, many ordinary people in ethnic regions are facing arrests and interrogation under the Counter-Terrorism Law.

Regarding democracy, peace and development, Burma is undergoing important political changes with the aim of building a democratic federal union based on peace and development. At this time, with the trust and support of the people, the support of the international community is essential. The government must comply with basic human rights and civil rights, we believe that there should be no hostility with international treaties and standards.

Download File:Statement of Opinion Regarding Definition of Political Prisoners

The Definition of Political Prisoner Reached at the Seminar
Held on August 17 and 18, 2014
The Definition of a Political Prisoner
1. Anyone who is arrested, detained, or imprisoned for political reasons under political charges or wrongfully under criminal and civil charges because of his or her perceived or known active role, perceived or known supporting role, or in association withactivities promoting freedom, justice, equality, human rights, and civil and political rights, including ethnic rights, is defined as a political prisoner.

2. The above definition relates to anyone who is arrested, detained, or imprisoned because of his or her perceived or known active role, perceived or known supporting role, or in association with political activities (including armed resistance but excluding terrorist activities), in forming organizations, both individually and collectively, making public speeches, expressing beliefs, organizing or initiating movements through writing, publishing, or distributing documents, or participating in peaceful demonstrations to express dissent and denunciation against the stature and activities of both the Union and state level executive, legislative, judicial, or other administrative bodies established under the constitution or under any previously existing law.