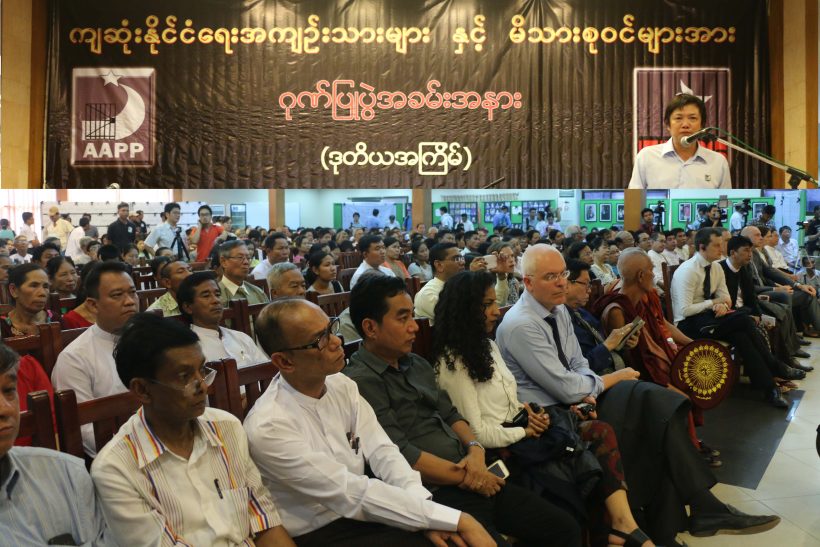 On March 25, 2016 AAPP and FPPS held a “Ceremony Honoring Fallen Political Prisoners” who perished inside interrogation centers and prisons whilst contributing, each in their own way, to the struggle for freedom and democracy in Burma. The Ceremony paid tribute to fallen political prisoners and celebrated the 16th year anniversary of AAPP’s establishment.

Secretary of AAPP, Tate Naing opened the ceremony speaking about the struggle for democracy in Burma and the sacrifices made by many political prisoners over the years who campaigned for freedom and democracy in the country.

Over 500 people came from across the country to attend the ceremony, held in Rangoon. Of the 500 around 130 were family members of fallen political prisoners.

Newly elected Members of Parliament from the National League of Democracy (NLD), diplomats, civil society representatives and representatives from the media came to attended the ceremony to pay their respects and acknowledge those who perished inside prisons and interrogation centers.

Among the families of fallen political prisoners were families of Karen, Chin, Shan and Taang ethnic groups who travelled long distances for the event.

Sixty Certificates of Honor and financial assistance were presented to the family members of fallen political prisoners. The certificates provided formal recognition of the activist’s contribution to the democratic movement, recognition that they had never received before.

“AAPP has documented at least 242 political prisoners that have died in detention and interrogation centers. This ceremony is not only important for the fallen political prisoners to honor their lives and acknowledge their sacrifice, but also their family members, who suffered along side them, to allow them to rehabilitate.”