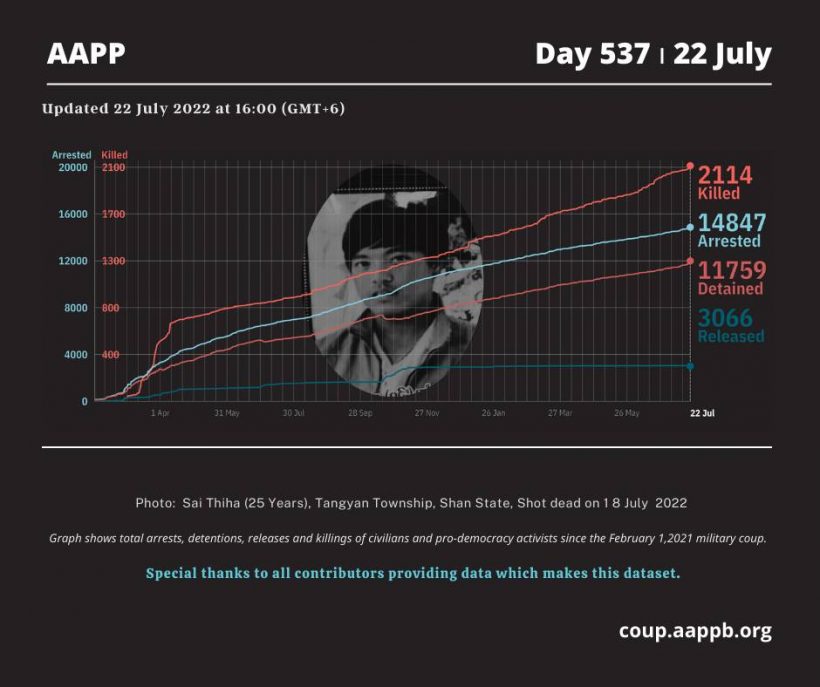 Since the February 1, 2021 military coup and the emergence of the Spring Revolution, a total of  (2114) people, pro-democracy activists and other civilians have been killed through military crackdown following pro-democracy movements. AAPP compiled and documented (3) fallen heroes today. These (3) fallen heroes, from Dagon Myothit (South) Township in Yangon Region, Khin-U Township in Sagaing Region and Waingmaw Township in Kachin State, were killed on previous days, but documented today. This is the number verified by AAPP. The actual number of fatalities is likely much higher. We will continue to update accordingly.

On July 20, Mandalay Regional chief minister Dr. Zaw Myint Maung, who is already sentenced to 26 years imprisonment, was sentenced to three more years under section 130-a of the Penal Code. He was charged by the special Court in Obo Prison for alleged violations against the electoral laws.

In the morning of July 20, the junta forces raided Shin Min Dway Village, Khin-U Township, Sagaing Region. Consequently, an NLD party member named Aung Naing Win was captured and fatally shot while trying to escape. His body was later discovered inside one of the houses that had been set on fire.