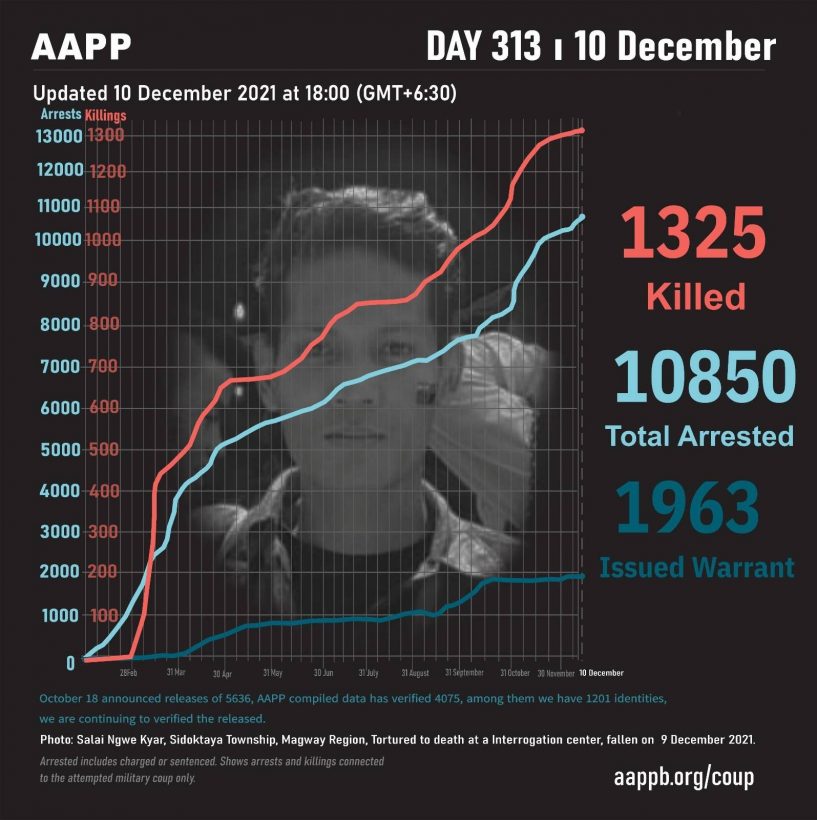 As of December 10, (1325) people are now confirmed killed by this junta coup. AAPP compiled and documented (2) fallen heroes today. These (2) fallen heroes from Hpei Hkon Township in Shan State and Sedoktara Township in Magway Region were killed on previous days and documented today. This is the number verified by AAPP. The actual number of fatalities is likely much higher. We will continue adding as and when.

On December 9, Salai Ngwe Kyar, who is a pastor at Asho Baptist Church, living in Thatkaltaung Village in Sedoktara Township, Magway Region, died at Magway General Hospital, from injuries consistent with torture. On December 6, he was arrested by the armed wing of the Junta and accused of being with the PDF. Salai Ngwe Kyar was on the way to Saw Township for his congregational responsibility when he was arrested. After being brutally tortured during interrogation, he was transferred to Magway General Hospital on December 8, and died on the morning of December 9.

The body of Hla Win, who is living in Kaungwhat Village in Hpei Hkon Township, Shan State, was found on December 9. It is reported that gunshot wounds and injuries from being beaten were found on his body. He was arrested at home on November 12 by Brigade (66), and accused of being part of the PDF. The junta forced him to wear a PDF uniform.