Home > Chronology > Crimes Committed by the Terrorist Junta in October

Crimes Committed by the Terrorist Junta in October 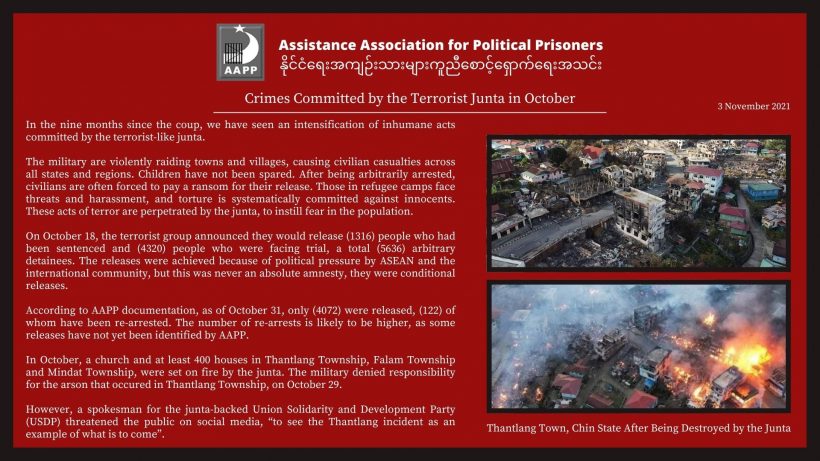 In the nine months since the coup, we have seen an intensification of inhumane acts committed by the terrorist-like junta.

The military are violently raiding towns and villages, causing civilian casualties across all states and regions. Children have not been spared. After being arbitrarily arrested, civilians are often forced to pay a ransom for their release. Those in refugee camps face threats and harassment, and torture is systematically committed against innocents. These acts of terror are perpetrated by the junta, to instill fear in the population.

On October 18, the terrorist group announced they would release (1316) people who had been sentenced and (4320) people who were facing trial, a total (5636) arbitrary detainees. The releases were achieved because of political pressure by ASEAN and the international community, but this was never an absolute amnesty, they were conditional releases. According to AAPP documentation, as of October 31, only (4072) were released, (122) of whom have been re-arrested. The number of re-arrests is likely to be higher, as some releases have not yet been identified by AAPP.

In October, a church and at least 400 houses in Thantlang, Falam and Mindat Townships in Chin State were set on fire by the junta. The military denied responsibility for the arson that occured in Thantlang Township, on October 29. However, a spokesman for the junta-backed Union Solidarity and Development Party (USDP) threatened the public on social media, “to see the Thantlang incident as an example of what is to come”.

In fact, the junta is also targeting National League for Democracy MP’s, officials, and supporters. The NLD Party which won the largest number of votes in the November 2020 election. In October, at least 10 NLD offices were attacked. The junta has also broken into NLD offices, looting items, committing arson and setting off bombs. At least 25 properties owned by Hluttaw representatives, NLD members, and ordinary civilians such as hotels, hospitals, houses and shops, were illegally seized by the junta in October.

According to AAPP documentation, (319) civilians were detained by the terrorist junta between October 1 and 31. (80) women were detained, and (27) were taken as hostages, including (9) children, under the age of 18.

In Mandalay, the Monk Union has been protesting daily against the military coup. On October 2, at around 1:30 pm, some 10 junta soldiers, armed and in plain clothes, arrived at Mya Taung Monastery in two cars. The military troops used a car to crack down on the protesting monks. During the crackdown, five monks were forced to change into normal clothes and were beaten, held at gunpoint and arrested. The same night, three other civilians were searched and arrested by the junta.

Families continue to be held as hostages on a daily basis. At the beginning of this attempted coup, the wife and nine-year-old daughter of a Naypyidaw-based police superintendent, who was involved in CDM, were arrested. Still, no one knows where they are being detained. When a father was not found in Thayet Chaung Township, Tanintharyi Region, his wife and two children, aged two and six-years-old, were arrested and detained on October 9.

In October, at least (79) civilians were killed in the junta’s targeted attacks. This includes (6) women and (3) children, under the age of 18. Of those, (17) died as a result of torture.

On the morning of October 1, around 100 terrorist junta soldiers raided Pyindaung village in Khin Oo Township, Sagaing Region, and chased the fleeing villagers. Five villagers, including a five-year-old boy, were shot dead in a field in the village. Houses were destroyed. Tractors, five cars, 40 motorbikes, rice and oil, were also stolen by the junta.

Ko Kyaw Naing Tun a.k.a Ah Nge Lay, who was released from Magway Central Prison on October 19, was re-arrested at his home in Magway on October 27, on suspicion of killing the Aung Metta ward administrator. The family was notified to retrieve his dead body on October 28. Police say he died due to COVID, but his body and head (especially his back), were covered with injuries consistent with torture.

This is but a summary of human rights violations committed by the terrorist junta group in October. In this climate of fear, similar atrocities have been widely perpetrated across the country, amounting to crimes against humanity.