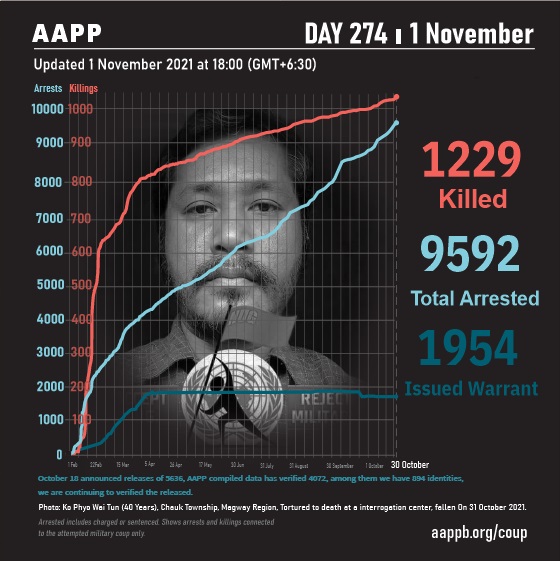 As of November 1, (1229) people are now confirmed killed by this junta coup. AAPP compiled and documented (7) fallen heroes today. These (7) fallen heroes from Magway Township and Chauk Township in Magway Region, Kantbalu Township, Kyunhla Township, Khin-u Township, Tabayin Township in Sagaing Region and Kyauktada Township in Yangon Region were killed on previous days and documented today. This is the number verified by AAPP. The actual number of fatalities is likely much higher. We will continue adding as and when.

Pyo Win Tun, head of a boarding school, living in Gway Pin Kwet Thit Village in Chauk Township, Magway Region, died during interrogation, hours after his arrest from to injuries consistent with torture. Three brothers named Phyo Wai Tun, Hphone Wai Tun and Show Wai Tun were arrested by Infantry Battalion 13 based in Chauk Township, on the night of October 31, accused of supporting the People’s Defence Force (PDF). Phyo Wai Tun’s family was informed to retrieve his body on November 1.

A former political prisoner named Kyaw Naing Tun a.k.a A Thay Lay, who was released from Magway Central Prison on October 19, was re-arrested at his home on October 27. He was killed the following day, during interrogation, due to injuries consistent with torture. His body and head; the back of his head in particular, were crushed.