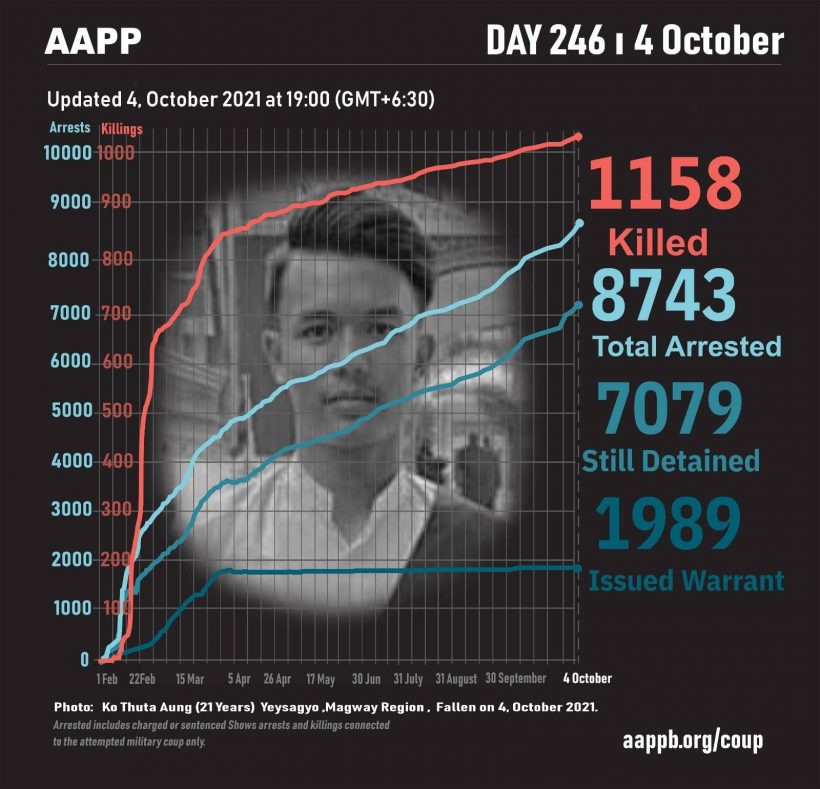 As of October 4, (1158) people are now confirmed killed by this junta coup. AAPP compiled and documented (5) fallen heroes today. (1) from Yesagyo Township in Magway Region was killed today and (4) from Khin-u Township and Wetlet Township in Sagaing Region were killed on October 3 and documented today. This is the number verified by AAPP. The actual number of fatalities is likely much higher. We will continue adding as and when.

On October 4 at around 9 am, Thuta Aung, a Mandalay university student, was shot dead on the spot, when the terrorist junta soldiers raided a tea shop in Yesagyo Township in Magway Region. The junta shot at the youths, while trying to arrest them. In addition to this, a female tea shop owner and five youths were arrested.

On the night of October 3, Aung Phyo, Aung Myint Soe and Sein Po, three local villagers of Shweku Talsu village in Sagaing Region’s Khin-u Township, were shot dead in the head, after they were forced to lie on their stomachs in a stress position. The locals from nearby villages including Shweku Talsu village fled from their homes, as the terrorist junta troops stationed the Pyin Htaung village, on the morning of October 3. These three villagers were killed when they ran into junta soldiers while returning home to feed the cows, because they thought that soldiers had left the village.