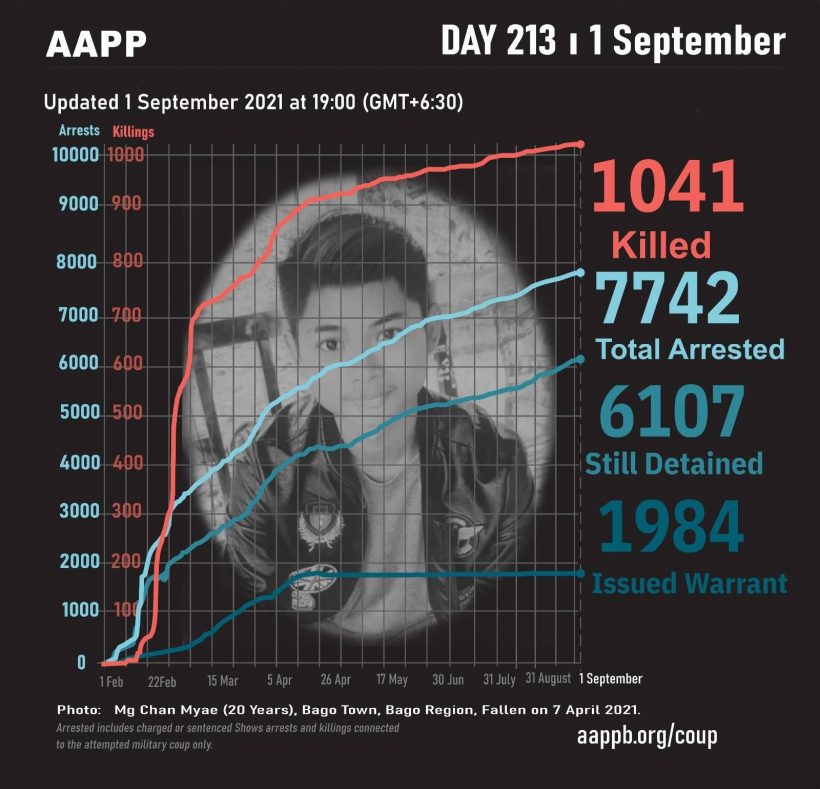 On August 31 at around 8 pm, Min Htet Ko and Lu Aye, the son and younger brother of Ayeyarwaddy Blood Donor Association Chairman Ko Ni, was shot at home in Daung Chaung Village in Mandalay Region’s Myingyan Township, by Pyu Saw Htee members. Min Htet Ko was shot in the stomach and died that night at Myingyan Hospital. Lu Aye is now receiving medical treatment. It is reported that Pyu Su Htee came to their house to shoot Ko Ni. When they did not find Ko Ni, they shot the people that they saw.

Zaw Moe, Eleven Media reporter based in Myeik, was arrested at home by junta soldiers and police on the early morning of September 1. In addition, Myo San Soe, former reporter of Delta News Agency, based in Ayeyarwady Region, was arrested for questioning by Pyapon Township junta police force at home on the evening of August 29.

Four youths named Dezin Htan, Htaal Twee, Htaung Pein and San Thein, who live in Chan Pyan Village in Chin State’s Matupi Township were arrested on August 20 and August 22. They were charged under Section 52(a) of the Counter-terrorism Law on August 24, for adding the NUG profile onto their Facebook.