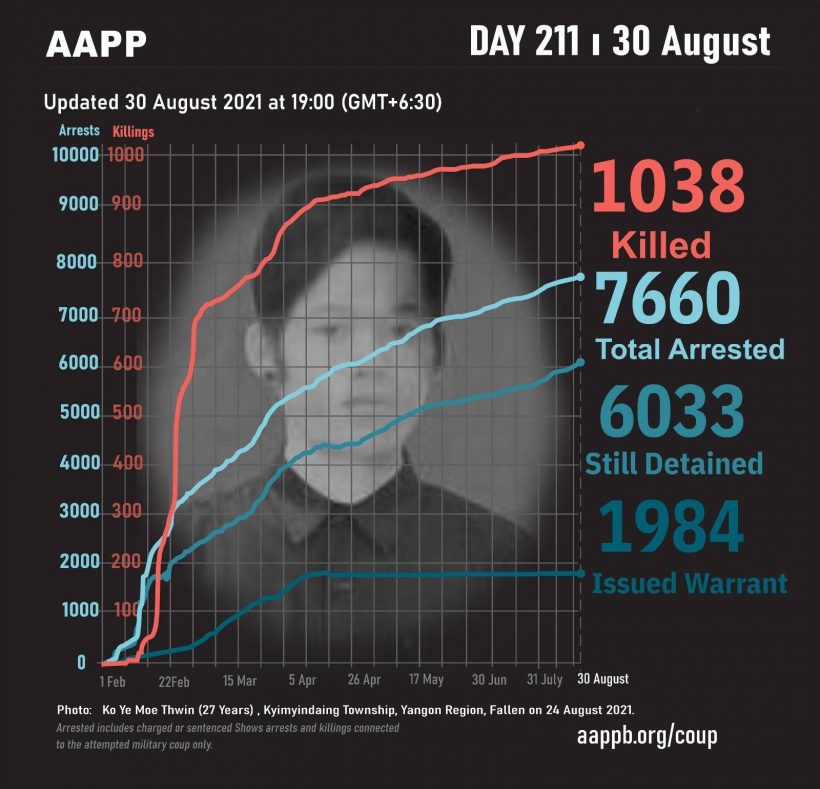 As of August 30, (1038) people are now confirmed killed by this junta coup. AAPP compiled and documented (12) fallen heroes today. These (12) fallen heroes from Waingmaw Township in Kachin State, Taunggyi Township and Monekoe Township in Shan State, Taze Township in Sagaing Region were killed on previous days and documented today. This is the number verified by AAPP, the actual number of fatalities is likely much higher. We will continue adding as and when.

Myo Min Thant a.k.a. Thar Nge, living in Taunggyi Township in Shan State, who was charged under Section 505(a) of the Penal Code after his arrest in March, died on August 29 while receiving medical treatment in Sao San Tun Hospital. While he was detained at Nyaung Shwe (Taung Lay Lone) Prison, he contracted COVID-19  and was sent to the Sao San Tun Hospital for medical treatment.

On August 26 at around 3 am, terrorist junta troops raided and set up camp at Ka Paung Kya Village in Sagaing Region’s Taze Township and searched for and shot local villagers who were hiding in the forest. On August 27, two siblings, a brother and sister, who were eating in a hut west of the village while hiding, were shot at when they ran away in fear after seeing the junta soldiers. The brother, Moe Swe Oo, was shot dead in the stomach, and his sister was shot in the arm and severely injured.

Zaw Min Lay and Hein Zar were arrested on August 26 and later killed when the terrorist troops began to raid Ka Paung Kya Village, with the bodies found in the village’s cemetery. Further locals named Kyaw Naing Linn a.k.a Japan, Phoe Gyi and Pu Si, were arrested the following day and their dead bodies were also later found in the village’s cemetery. It is reported that Zaw Min Lay was shot in the temple and Pu Si was shot in the chest.

Four local villagers named Eike Auu, 32-year-old, Aung Khaing, 10-year-old, Ei Moune, 63-year-old, and Ei Moe, 82-year-old, were killed from an artillery shell which was unprovokedly fired by the terrorist junta and exploded at a house in Nant Har Village in Shan State’s Monekoe Township on the morning of August 29.