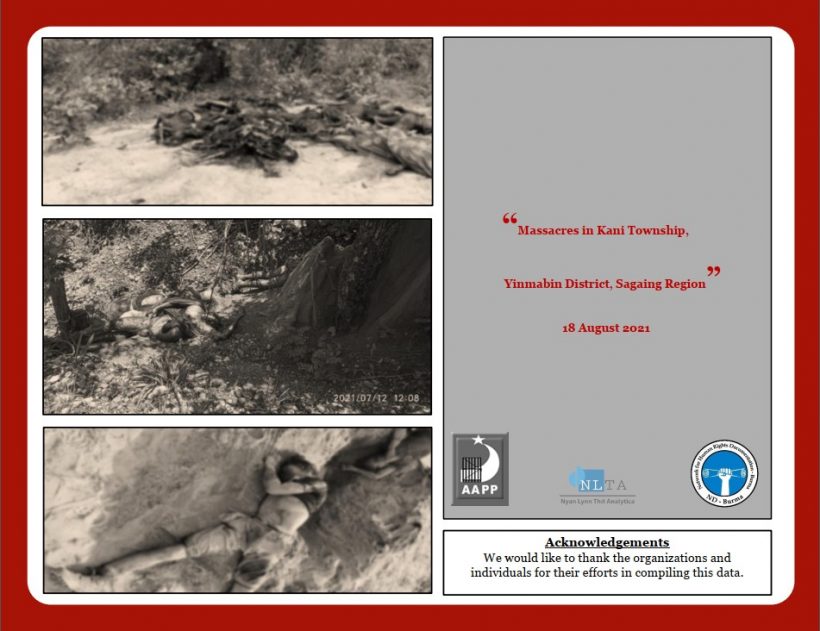 In over (70) years of civil war in Burma, ethnic nationalities have suffered torture, extrajudicial killings, massacres, rape, villages burned to the ground, and residents forced to flee their homes in indiscriminate junta military so-called ‘Military Clearance Policy’. Human rights and civil society organizations across Burma have repeatedly called for action to end this military’s impunity. The UN formed a fact-finding mission in 2017 to investigate the repeated human rights violations. And yet, the junta has continued to perpetrate human rights abuses, war crimes, and crimes against humanity.

The military junta seized power and arbitrary arrested the country’s elected leaders on February 1, 2021. People across the regions and states have been resisting the junta in various ways. Kani Township, Yinmabin District, Sagaing Region is known as a prominent area of opposition to the coup. The juntas’ response has been to target and destroy areas in Kani Township, and surrounding villages and forests with shootings, arrests, and raids in military incursions. Thousands of residents have fled to nearby villages and forests. The junta has also entered these villages and killed buffaloes, cows, and looted property from the villages.

44th and 99th Light Infantry Division, including battalion 228th based in Kale Township, have attacked almost every village in Kani Township, using some thousand troops in three different strategic divisions. Many locals have endured inhumane atrocities by the junta. Arbitrary arrest, torture, and sometimes being killed through torture. It has also been reported that internal displaced persons are suffering from food and medical shortages. The terrorist (junta) group has been collecting money through extortion, as well as assaulting, intimidating, and beating locals like with rifle stocks when they travel to Monywa Township to purchase necessities.

Ooredoo and Telenor tele-com operators’ internet and phone lines were suspended on July 9, and MPT was cut off on August 2 in some villages in Kani Township. According to locals, only the military owned Mytel internet and phone line are currently available in some villages. The junta has been uses its four cuts doctrine to indiscriminately target civilians. In July alone, the junta committed 4 massacres in Kani Township villages. At least 43 people have been discovered killed in this way.

Four men were arrested, tortured, and shot in the head on July 1, between 4 – 6 pm in Shitkoetat Forest between Mone O Village and Ywar Thar Village, Kani Township, Yinmabin District, Sagaing Region. According to locals, the (4) corpses were found headless from shootings on July 3. Some (25) motorcycles were found burned in a nearby fire. The (4) men were each from Sein Kone Village, Phan Khar Kone Village, Sule Kone Village, and Inn Chaung Village.

The junta stormed Yin Village and Kone Thar Village, located on the eastern bank of Chindwin River. They entered the village, forcing residents to flee to Kyauk Hle Ka Village on July 9 and 10. Missing were twenty-six villagers. When locals went searching for them, (15) dead bodies were discovered in the valley on Khin Tan Shay Hill, east of Yin Village, Kani Township, Sagaing Region, and (1) dead body was found in another nearby village. According to locals from Yin Village, the dead bodies were found on July 11 and 12 on the hill east of Yin Village.

The (16) murdered persons were from Yin Village (13), Kone Thar Village (1), Paluzawa Village (1), and from Htauk Kyan Kone Village (1). Most of the victims were men, aged between (30) and (50), one of the victims was a male in his 60’s. All the corpses were found with signs of severe torture, some with cuts and bruises on faces and necks.

A clash between the military junta and People Defense Force (PDF) happened near Zee Pin Dwin Village, Kani Township, Sagaing Region, on the evening of July 26. Some villagers and PDF went missing. Five dead bodies were found in the first search, by the paddle field behind Zee Pin Dwin Village, and another seven dead bodies were found in a second search. Total of (12) corpses were discovered on July 27.

The (12) fatalities from this third massacre were from Zee Pin Dwin Village (2), Chin Phone Village (1), Thamin Zat Village (1), Tha Lauk Village (1), and Monywa Township (7). According to locals all the victims were found with wounds and injuries from beatings and torture.

Junta troops raided a small village near Htoo Village, Taungpauk Village Tract, Kani Township. A local People Defense Force (PDF) from Kani Township resisted the attack and a clash unfolded on July 26 and 27. On the morning of July 28, the junta raided Ko Aung Kyaw Myint’s house, a farmer from Thayat Taw Village, who was working in Kyat Chaung Taw Tike. (11) men, including Ko Aung Kyaw Myint, were detained, and his house burned down by the terrorist group. According to one of the victims’ wives, she heard (10) gunshots around 10 am close by to Ko Myint Thein’s farm, a local in Thayat Taw Village.

On July 31, the villagers went on a search and found (11) men massacred in Ko Myint Thein’s farm, in Thayat Taw Village. (2) motorbikes had also been set on fire at the intersection of Kyauktaga and Kyat Creeks, Taungpauk Village Tract, Kani Township.

The (11) victims were all men and from Kho Dwin Village (1), Thayat Taw Village (6), Kani Township (3), and Nyaung Thu Village (1). The (3) from Kani Township were brothers working as farmers in coal manufacturing in their relatives’ village. Among the dead, (3) had bruises on their faces and all over their bodies, they had been shot in the head and chest, with burns on their faces from gasoline. All the bodies were rotting by the time they were found.

In the aftermath of the incident, U Maung Myint, a resident from Kho Dwin Village, Kintaung Village Tract, Kani Township, was mentally distressed by the massacre and drove his motorcycle to a high school in Kani Township where junta troops were based on the evening of August 1. U Maung Myint shouted “civilians died because of you”. He went close to the school’s wall unarmed, the junta then shot. According to his family, junta troops disappeared the body over the night.

Atrocities committed by this terrorist group are happening across Burma daily. The massacres in Kani Township are but incidents which have emerged with concrete evidence. These events testify that the junta is committing crimes against humanity. It is the junta which is responsible for these crimes threatening the lives and property of civilians all over Burma.

The massacres in Kani Township are an act of extermination under the international law. The (1949) Geneva Convention and its June 8, (1977) additional protocols established international humanitarian law norms such as protection of the civilian population, objects indispensable to the survival of the civilian, cultural objects and places of worship due to international or non-international armed conflicts.

According to article (32) of the Fourth Geneva Convention, the Geneva Convention related to the Protection of Civilian Persons in Time of War, taking any measure of such a character as to cause the physical suffering or extermination of protected persons in their hands is prohibited. This applies not only to murder, torture, corporal punishment, mutilation and medical or scientific experiments not necessitated by the medical treatment of a protected person, but also to any other measures of brutality whether applied by civilian or military agents.

The Kani Township massacres and targeting of civilians is a clear violation of the Geneva Conventions. The junta’s torture and murder of civilians in Kani Township must be condemned by the international community as crimes against humanity and litigated accordingly. Similar incidents to Kani Township occurred in Depayin Township and other townships. These incidents will consequently be examined by civil society organizations.

(2) persons over the age of 60, and (1) disabled person were killed in the second massacre. This junta has repeatedly committed torture towards the most vulnerable members of society, such as children and the disabled. Groups which the international community has made specific pledges to protect.

Article (15) of the UN Convention on the Rights of Persons with Disabilities, ratified by (182) countries, including Burma, states that “States Parties shall protect persons with disabilities from being subjected to torture”. The international community must adhere to its vital responsibility to ensure these groups are protected.

It is therefore necessary for the international community to act against this terrorist group and reject a murderous junta and illegitimate coup at the United Nations General Assembly. At the same time, the National Unity Government, with legitimacy granted by Burma’s people, must be recognized and given appropriate credentials by the international community as the legitimate government in Burma.