Home > Reports and Statements > Hostages under the military coup

Hostages under the military coup

Posted on June 4, 2021  •  Posted in Reports and Statements, Statements 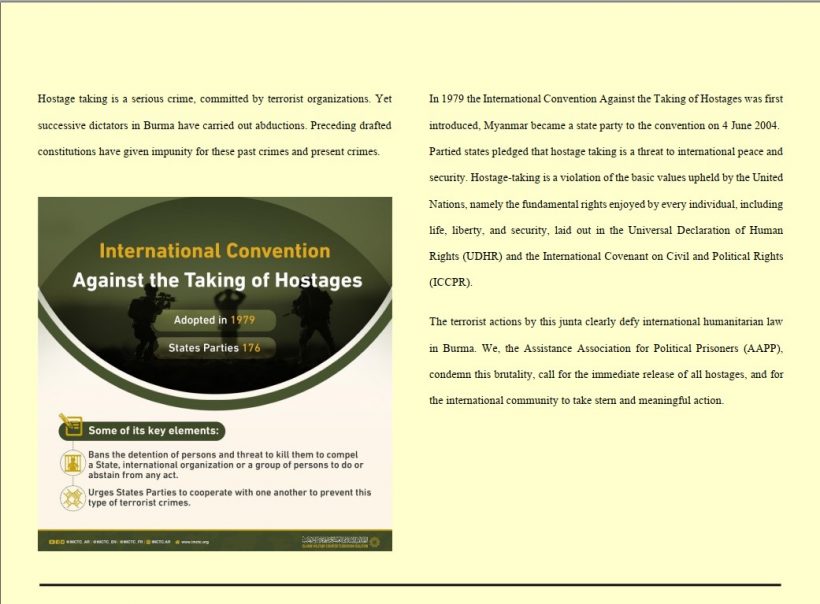 Hostages under the military coup
Date : 4 June 2021
Since 1 February 2021, when the junta arrested Burma’s elected state leaders and unlawfully seized power, junta forces have carried out relentless and dailyarbitrary arrests. The junta uses brutal force to arrest these civilians, on thestreet, in their homes, and even in hospitals receiving medical treatment. The junta employs brutality to arrest those not easily detained, like ramming with cars. When wanted individuals aren’t found, family members are taken hostage.

This junta takes whoever they can find, including children, employing worsening methods to apprehend the detainees. According to AAPP’s documentation, at least 76 people have been taken hostage since the coup. 28 have been released and 45 remain in custody. Twowere placed under house arrest and one has been sentenced to prison.
The 45 who remain in custody include National League for Democracy’s Hluttaw representatives, party leaders, protestors, CDM strikers, those issued warrants under Penal Code 505-a, and those suspected to have links to EAO’s. Two people currently held hostage have been placed under house arrest. On 22 May, in Pantanaw Township, Irrawaddy Division, the junta came to arrest NLD party leader U Mya Nyein at his house. They did not find him, instead taking his wife Daw Nyein Nyine (75 years-old) and his cousin Daw Wine Tine (65 years-old). At first held in Pantanaw Police Station, they were later placed under house arrest. At present, they have not been allowed to return to
their home in Mimma Pye Village, instead held at the house of U Mya Nyein.

One person who was taken as hostage has been sentenced to prison. On 2 May, in Rangoon Division, the home of political activist Ko Tin Hute Paing, in North Okklapa, was raided. The junta could not find him, instead detaining and beating his mother. On 28 May, at a North Okkalapa military court, she was sentenced to three years under Penal Code 505-a. Of the 76 hostages, 36 of them are women, aged from 2 to 75 years old.Hostage taking is a serious crime, committed by terrorist organizations. Yetsuccessive dictators in Burma have carried out abductions. Preceding drafted constitutions have given impunity for these past crimes and present crimes.In 1979 the International Convention Against the Taking of Hostages was first introduced, Myanmar became a state party to the convention on 4 June 2004.
Partied states pledged that hostage taking is a threat to international peace and security. Hostage-taking is a violation of the basic values upheld by the United Nations, namely the fundamental rights enjoyed by every individual, including life, liberty, and security, laid out in the Universal Declaration of Human Rights (UDHR) and the International Covenant on Civil and Political Rights(ICCPR).
The terrorist actions by this junta clearly defy international humanitarian law in Burma. We, the Assistance Association for Political Prisoners (AAPP),condemn this brutality, call for the immediate release of all hostages, and for the international community to take stern and meaningful action.