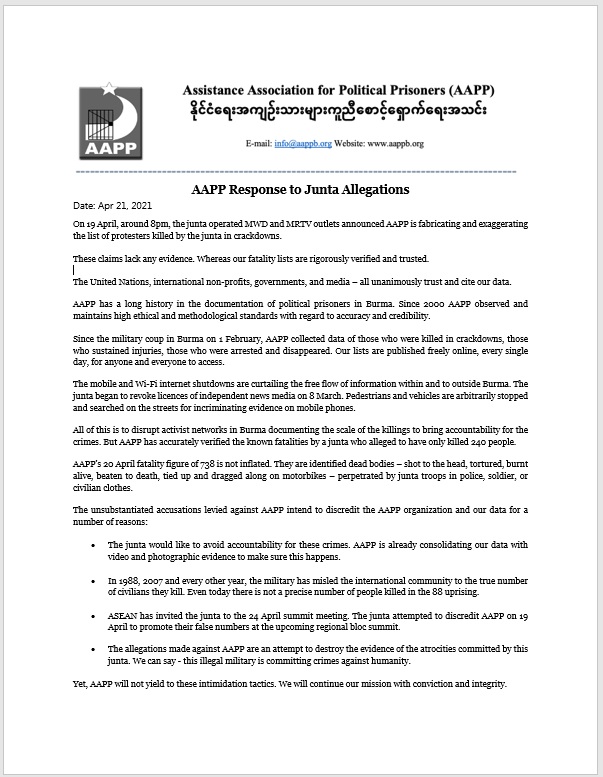 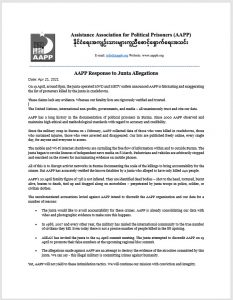 On 19 April, around 8pm, the junta operated MWD and MRTV outlets announced AAPP is fabricating and exaggerating the list of protesters killed by the junta in crackdowns.

These claims lack any evidence. Whereas our fatality lists are rigorously verified and trusted.

The United Nations, international non-profits, governments, and media – all unanimously trust and cite our data.

AAPP has a long history in the documentation of political prisoners in Burma. Since 2000 AAPP observed and maintains high ethical and methodological standards with regard to accuracy and credibility.

Since the military coup in Burma on 1 February, AAPP collected data of those who were killed in crackdowns, those who sustained injuries, those who were arrested and disappeared. Our lists are published freely online, every single day, for anyone and everyone to access.

The mobile and Wi-Fi internet shutdowns are curtailing the free flow of information within and to outside Burma. The junta began to revoke licences of independent news media on 8 March. Pedestrians and vehicles are arbitrarily stopped and searched on the streets for incriminating evidence on mobile phones.

All of this is to disrupt activist networks in Burma documenting the scale of the killings to bring accountability for the crimes. But AAPP has accurately verified the known fatalities by a junta who alleged to have only killed 240 people.

AAPP’s 20 April fatality figure of 738 is not inflated. They are identified dead bodies – shot to the head, tortured, burnt alive, beaten to death, tied up and dragged along on motorbikes – perpetrated by junta troops in police, soldier, or civilian clothes.

The unsubstantiated accusations levied against AAPP intend to discredit the AAPP organization and our data for a number of reasons:

Yet, AAPP will not yield to these intimidation tactics. We will continue our mission with conviction and integrity.