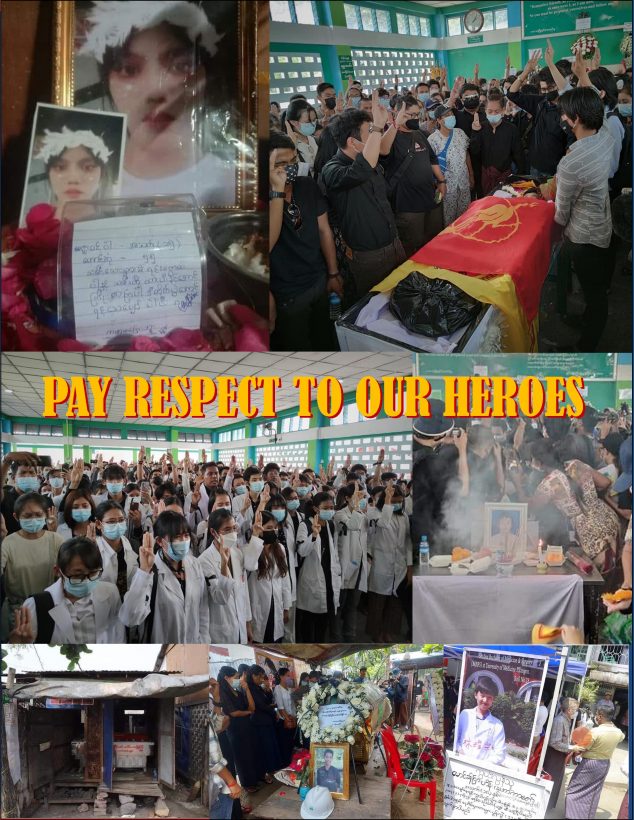 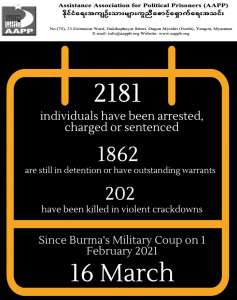 The Assistance Association for Political Prisoners (AAPP) honors the heroes who sacrificed their lives and liberty to fight for democracy, human rights and the end of dictatorship. Up until now, (202) people have been killed, and at least (2) people were killed today. Further casualties will be added when confirmed.

As of March 16, a total of (2181) people have been arrested, charged or sentenced in relation to the attempted military coup on February 1. Of them, (13) were convicted; (2) to two years imprisonment, (1) to three months, (2) to one year imprisonment, (8) to three months imprisonment. (73) have been charged with a warrant and are evading arrest, (319) were released. A total of (1862) are still under detention or have outstanding charges/evading arrest, including the (13) sentenced.

In today’s detainee list, we received and documented the names of (6) people. More were arrested today, AAPP will continue to investigate these and make appropriate announcements when.

Detainees have not been allowed to meet with their relatives and legal representatives, no one knows where so many have been detained. Successive dictators have done this, detainees are deprived of basic rights and subject to various forms of physical and mental torture. It is therefore very concerning that facts on current detentions are so scarce, and worrying that no information has been received about those now missing from the crackdowns.

Yesterday, after the illegitimate military regime declared martial law, brutal assaults and killings by the military and so-called police intensified. There has been no legal retaliation by the public yet the military have increased their crimes. Junta forces target protestors but also ordinary people using sniper rifles regardless of the time or place.

Yesterday night in Dawbon Township and Dagon Myothit (South) Township, Yangon Region, the military and so-called police raided the area and fired guns into the streets, resulting in three civilians dying and more than three people injured. One of them, a dead body without clothes, was dragged away by the junta forces. The dead bodies of three other youths were returned though they were detained without even an injury during a crackdown in Dagon Seikkan Township. In Pathein Township, Ayeyarwady Region, a night strike in the streets was brutally cracked down using live ammunition, resulting in two men being killed. Furthermore, in Moggok, Mandalay region, some people got injured due to shots from machine guns directing into the houses and the streets.

Some injured people were arrested and died without access to medical treatment, some individuals have died due to being tortured during interrogation, some others who were shot dead in a crackdown were dragged away without mercy and their dead bodies are not being returned to their families by junta forces. The people in Burma were inhumanely attacked and killed on a daily basis by the junta coup.

Today, a man was shot dead in the head while he was walking along Sipin Road in Dagon Myothit (South) Township, Yangon Region. In Kawlin Township, Sagaing Region, one civilian was killed during a crackdown there. In Wundwin Township, Mandalay Region, two civilians were shot in the head and chest by live ammunition.

In Hlaing Thar Yar township, Yangon, the junta forces shot into the streets this evening. Furthermore, in Tharkayta township, the junta forces and their informers raided people’s houses. Hence, the families of former political prisoners and the activists have. The junta forces arrest whoever is in the house if they can’t find the desired target.

Around 200 local residents in Kachin State have had to flee because of the armed clashes between Kachin Independence Army (KIA) and the terrorist junta. Burma has fallen into a dire crisis with civil wars and intense political unrest.