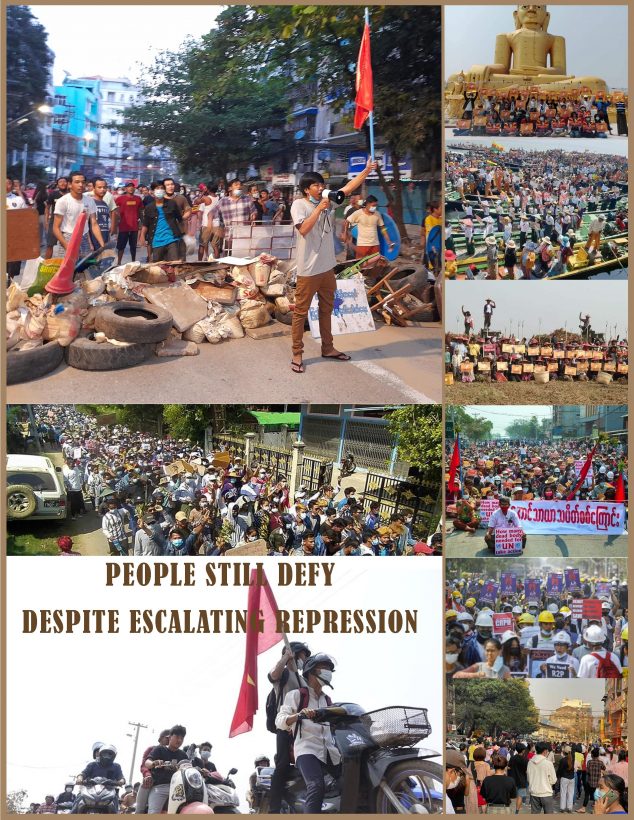 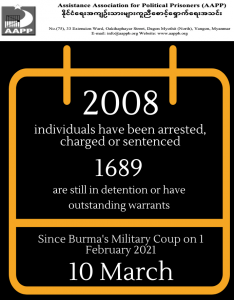 The Assistance Association for Political Prisoners (AAPP) honors the heroes who sacrificed their lives and liberty to fight for democracy, human rights and the end of dictatorship. Up until now, more than (60) people have been killed due to violent and arbitrary crackdowns.

As of March 10, a total of (2008) people have been arrested, charged or sentenced in relation to the attempted military coup on February 1. Of them, (3) were convicted; (2) to two years imprisonment, (1) to three months. (73) have been charged with a warrant and are evading arrest, (319) were released. A total of (1689) are still under detention or have outstanding charges/evading arrest, including the (3) sentenced.

In today’s detainee list, we received and documented the names of (69) people. However, approximately 500 protestors including students and youths were arrested during the crackdown across the country today. We will continue to investigate these and make appropriate announcements when.

The military coup junta will try any means to retain control, increasingly now persecuting and violently cracking down on a growing civil disobedience movement (CDM). At around 4am today, the so-called police and military blocked the area around the Mahlawgon Railway Station compound, Mingalar Taung Nyunt Township, Yangon. The junta forces then searched for the staff leaders who joined the CDM. Over 800 staff who lived in the railway compound were forced to relocate because of involvement in the CDM. Food which had been donated to them was stolen by the military and so-called police, according to local residents. Earlier this morning in Thonesal Township, Bago Region, Daw Ei Ei Phyo Paing Aye, the headmistress of Pebingone School, was violently arrested by the military and so-called police. The juntas’ control of the country has almost come to a standstill due to the CDM. This is why they are stepping up arrests and prosecutions of CDM staff. In order to weaken the movement.

Torture is a tactic of this military junta in conjunction with arrests. The recent deaths of two NLD members during detention has displayed their use of inhumane torture, the safety and dignity of these detainees is a matter of grave concern. The coup junta is trying various means to maintain its power by arresting and torturing political activists, students, and youths who are involved in the protests. The illegal military aims to reduce their involvement and as a leadership.

On the other hand, the military coup junta has targeted and brutally suppressing students and youths, yesterday, in Myeik Township, Tanintharyi Region, student and youth detainees were brutally beaten on their back and hip with a chain by the military and so-called police. Then, they were forced to sing “revolutionary songs” and attacked for ‘poor singing’. Since yesterday evening in Dawei Township, Tanintharyi Region, a large number of soldiers and so-called police entered the town quarters and streets, then fired rubber bullets and tear-gas until the night. Some people were injured and some were arrested. Moreover, the military and so-called police destroyed motorcycles along the road and stole some others.

In particular in North Okkalapa Township. 300 peaceful protestors were arrested and kicked in their faces and beaten in their heads with batons and taken into police vehicles. One person was shot with live ammunition during the crackdown and is in critical condition. In Tharkayta Township, after the crackdown on peaceful protests, the military, and so-called police came back with civilian vehicles and hit peaceful protestors, it is not yet confirmed how many were injured. In Myingyan Township, the military violently cracked down using live ammunition, and two peaceful protestors were shot and are in critical condition. In Kyaukme Township, Shan State, the military and so-called police beat two civilians, including a 14-year-old who was beaten  unconscious, and then arrested them. In Sintgaing Township, Mandalay Region, five youths were beaten unconscious and arrested in front of their parents.

The illegal military’s violence is intensifying in obvious contravention of domestic and international laws, they are suppressing peaceful protests, but also destroying private property and looting valuables (e.g. money and gold) on a daily basis. Protests continue to peacefully defy this illegal coup and junta actions.

On 9 February, the Committee Representing Pyidaungsu Hluttaw (CRPH) issued a statement saying that it appointed Man Win Khaing Than, former chairman of the Amyotha Hluttaw, as acting vice-president. AAPP recognizes this appointment and announcement of the CRPH.