On February 7, demonstrations against the military coup intensified. This morning thousands of activists, students and civilians took part in protests in Rangoon and across the country, and Min Ko Naing, 88 Generation Student Leader, arrived and stood among the protesters. 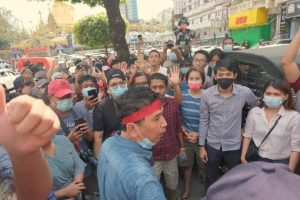 Demonstrations were held at Rangoon, Bago, Mandalay, Sagaing, Ayeyarwady, Tanintharyi and Magway Regions, Naypyidaw, Mon, Shan, Karen and Kachin States. Protests were peaceful and non-violent, and police blocked the roads for protestors and watched the situation, though there were no violent crackdowns. 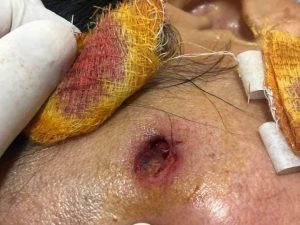 When police fired in the air at protestors in Myawaddy Town in Karen State, rioting broke out and a total of 14 civilians (5 women and 9 men) including former female political prisoner Khin Htar were arrested. By 6:30pm, they all were released. A woman was also shot during the protest in Myawaddy. The 8pm symbolic peaceful “Drumming out of Evil” continued across the country in opposition to the military junta.

It has also been verified that Than Lwin, NLD Chairman of Payathonzu Town of Karen State, was arrested on the night of February 6.

It has also been confirmed that Dr. Zaw Myint Maung, Chief Minister of Mandalay Division, was in the morning of February 7 moved from house-arrest with a group of MPs. He was then re-arrested and placed in another location. He is reportedly not in good health.

Phyo Min Thein, Chief Minister of Rangoon Region, was re-arrested when under house arrest last night. Tun Tun Hein, Deputy Speaker of the lower house of the Myanmar parliament was released today. He returned to his hometown Nawnghkio, Shan State as he was not allowed to return where his family lives in Rangoon.

U Htun Htun Hein, Vice Speaker of Pyithu Hluttaw (Lower House of the Parliament) and member of the Central Executive Committee of the NLD, was released from detention at around 10am, a family member confirmed. However, he was not allowed to return to his home in Rangoon. He and his wife are now going to Naung Cho, his birthplace in a small town, Shan State,

Therefore, as of February 7, a total of (165) people have been arrested and detained in relation to the military coup on February 1. Of them, (2) were sentenced to two years imprisonment and (13) were released. A total of (152) are still under detention, including the (2) sentenced.

In addition to all this, according to the Pyay Former Political Prisoner Group, Kyaw Nyan Tun, Myo Thant Htut and Phyu Phway will be charged under the Natural Disaster Management Law for staging a protest against the military coup in Pyay Township, Bago Division. They have not yet been detained. 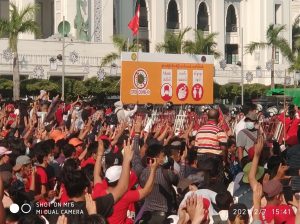 Today people have expressed their desire and great concern for the future of Burma. We urge the respect of people’s will and to protect peaceful protesters in ways that were not done during the past military regime in Burma. In addition, we urge foreign governments and the international community to monitor and take actions against the military coup.