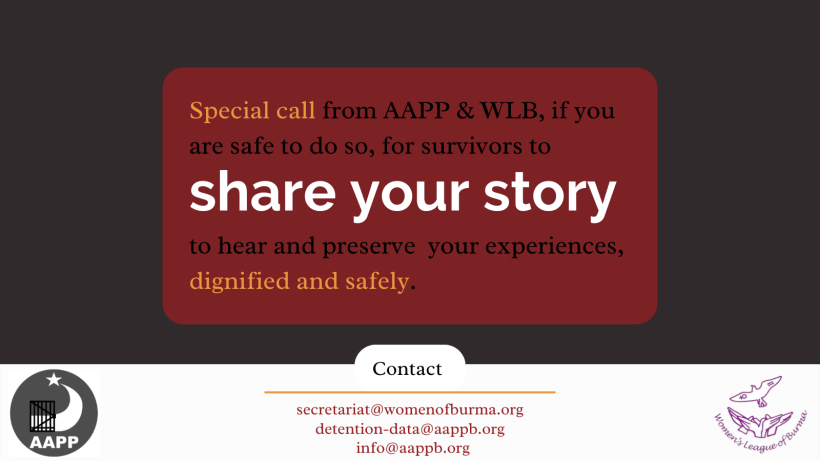 The Assistance Association for Political Prisoners (AAPP) and Women’s League of Burma (WLB) are making a joint call for survivors of sexual violence by the military junta since the coup, to report violations to civil society organizations and accountability mechanisms. 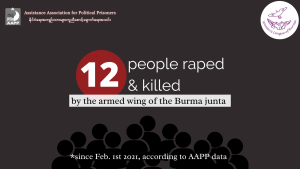 According to AAPP documentation at least 12 civilians have been killed and then reportedly raped before or after by the armed wing of the junta.

Shocking crimes like these have been a hallmark and weapon of junta campaigns against Myanmar people, particularly non-Bamar ethnic nationalities, over the past decades of civil war.

However, stigmatization shrouded past abuses. This included political prisoners in pro-democracy uprisings, such as in 1988, 2007 and many other years, who endured rape and sexual violence, particularly male or LGBT survivors.

First-hand accounts of rape, and statements by student unions on “bamboo sticks thrust inside their rectums” epitomize the personal courage of those exposing personal trauma, and demonstrate the widespread and brutal nature of these crimes since the coup.

In September 2022, AAPP received a testimony from a political prisoner, *Kyaw Kaw, who was a survivor of gang rape of by junta soldiers and criminals, in May 2021. 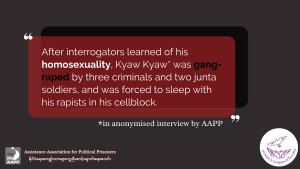 The story of *Kyaw Kyaw begins as a first-year university student turned-guerilla strike leader in Yangon, following the military coup. A junta-tip off to one of the peaceful flash-mob protests he oversaw led to a battlefield-equipped military division raiding the protest. At the time, Light Infantry Division 77 – notorious for involvement in atrocities in the Rohingya ‘clearance operations’ – were stationed in the area.

Despite trying to hide in a nearby store, he was detained by police and junta soldiers and transferred to a Yangon township police station. Placed in an interrogation cell, *Kyaw Kyaw was confined to a chair and struck in the face and body. A commanding officer would escalate from slaps and kicks, to twisting and breaking his fingers, with a knife held to the neck. When answers would not suffice, a lit cigarette was shoved in his ear, causing permeant hearing impairment to this day.  By the same evening, the interrogators discovered he was homosexual, telling him plainly: “There are criminals who want to have sex with you.”

*Kyaw Kyaw was put in a cellblock with three criminals and two military junta soldiers, and handcuffed. Over the course of 30 minutes, he was gang-raped by all five. One of the criminals penetrated him from behind, causing bleeding from the anus, whilst the other four forced him to molest them. *Kyaw Kyaw was made to sleep in the same cell-block with his rapists, before being transfered to Shwe Pyithar interrogation center the following morning. Here he would be tortured for two days and nights, using inhumane techniques consistently documented by AAPP, WLB, and other human rights groups. 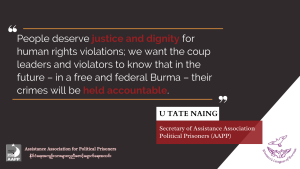 AAPP Secretary U Tate Naing said that “the people deserve justice and dignity for human rights violations; we want the coup leaders and violators to know that in the future – in a free and federal Burma – their crimes will be held accountable.”

*Kyaw Kyaw is now free, in a safer place, with a desire for justice matched by his aspiration for the future of Myanmar –  “I want others to get a position regardless of their religion, color, or gender. I want to get access to a good education system for our citizens… I want our country to be a democratic one.” 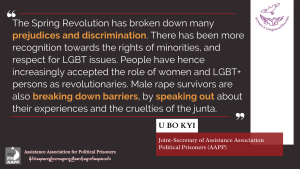 AAPP Joint-Secretary U Bo Kyi said “the Spring Revolution has broken down many prejudices and discrimination. There has been more recognition towards the rights of minorities, and respect for LGBT+ issues. The people have hence increasingly accepted the role of women and LGBT+ persons as revolutionaries. Male rape survivors are also breaking down barriers by speaking out about their experiences and the cruelties of the junta”.

WLB spokesperson said “the military junta has been perpetrating gender-based violence, including rape, and other forms of sexual violence as a weapon of war with impunity for decades. As long as these crimes continue to be perpetrated with impunity, our society will never achieve genuine peace. Therefore, every perpetrator of such sexual violence must not be exempt from their actions, sexual violence is a crime! Action must absolutely be taken and there must be accountability” 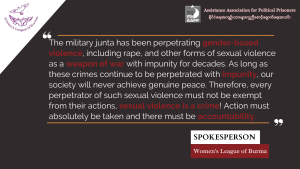 Spokesperson of Women’s League of Burma (WLB) said “The military junta has been perpetrating gender-based violence, including rape, and other forms of sexual violence as a weapon of war with impunity for decades. As long as these sexual violence continues to be perpetrated with impunity, our society can never have genuine peace. Therefore, every perpetrator of such sexual violence should not be exempted from their actions, sexual violence is a crime. Hence, an action must be taken absolutely and there must be accountability”20m 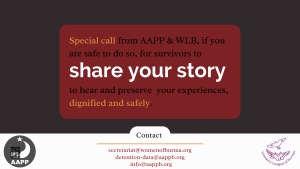 This briefing ends with a special call: For survivors of rape and sexual violence to contact human rights documenters, if it is safe to do so, for these violations to be heard and preserved. The aim of this special call is to empower survivors to share their story safely, with dignity, and their agency above all else

Anonymity is used at all times, to protect the survivors and their relatives who remain inside the country (see here: for the military junta’s use of hostage-taking and property seizure).