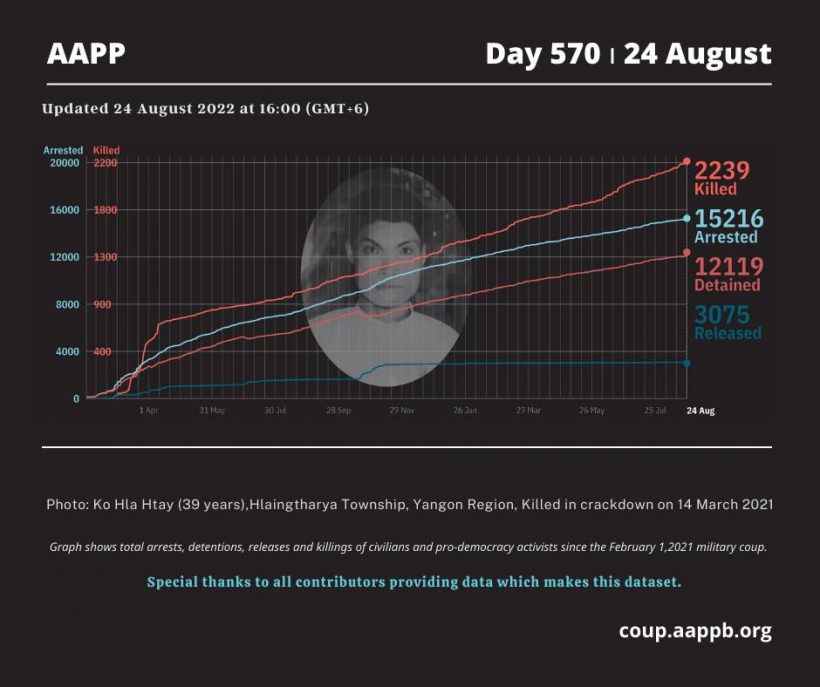 Since the February 1, 2021 military coup and the emergence of the Spring Revolution, a total of  (2239) people, pro-democracy activists and other civilians have been killed through military crackdown following pro-democracy movements.

On August 15, the 603th Light Infantry Battalion of the junta forces stationed at Kyun Pin Seik Village, Kyaukkyi Township, Bago Region, captured Saw May Htoo, from Sar Bu Taung Village, and Saw Gyi Ngay, from Mae Mae Village. They were tortured, and on August 17 at 10 AM, they were killed. Both victims were captured on their way to check on their livestock in the village.

On August 23 at 11:41 PM, 4 locals were instantly killed and one local was injured after the junta aircraft dropped bombs at Thit Saint Kone Village, located to the west of Kawlin Town, Sagaing Region. The deceased were: Pyae Sone, aged 6 and a half; Moe Aung; and Zin Myo Tun and Phyu Zar Win, who are husband and wife. Phyu Zar Win was 9 months pregnant.