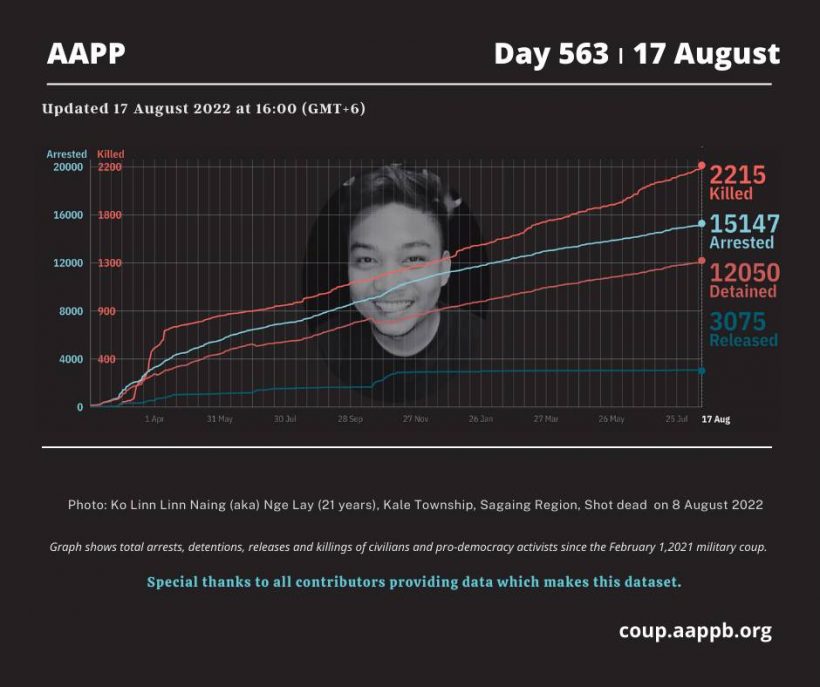 Since the February 1, 2021 military coup and the emergence of the Spring Revolution, a total of  (2215) people, pro-democracy activists and other civilians have been killed through military crackdown following pro-democracy movements.

In the evening of August 11, the junta forces attacked Yin Paung Taing Village, Yinmarbin Township, Sagaing Region, and launched airstrikes with three Mi-35 fighter jets. This lasted for more than an hour, and after, some 60 soldiers were dropped from three helicopters to carry out a ground offensive, stationing themselves in the village on August 14. After the troops left, the bodies of 18 civilians, including a 12-year old child, were found in the village.

In the morning of August 14, Myo Kyaw, State Hluttaw Representative from Hopin Town, Kachin State, and Sai Maung, a strike leader from Hpakant Township, were arrested at 21 Mile Checkpoint, Myitkyina Township. They were stopped at the checkpoint while going to Mandalay from Myitkyina, and were arrested after junta forces checked Sai Maung’s phone and bag and found information related to the National Unity Government (NUG).