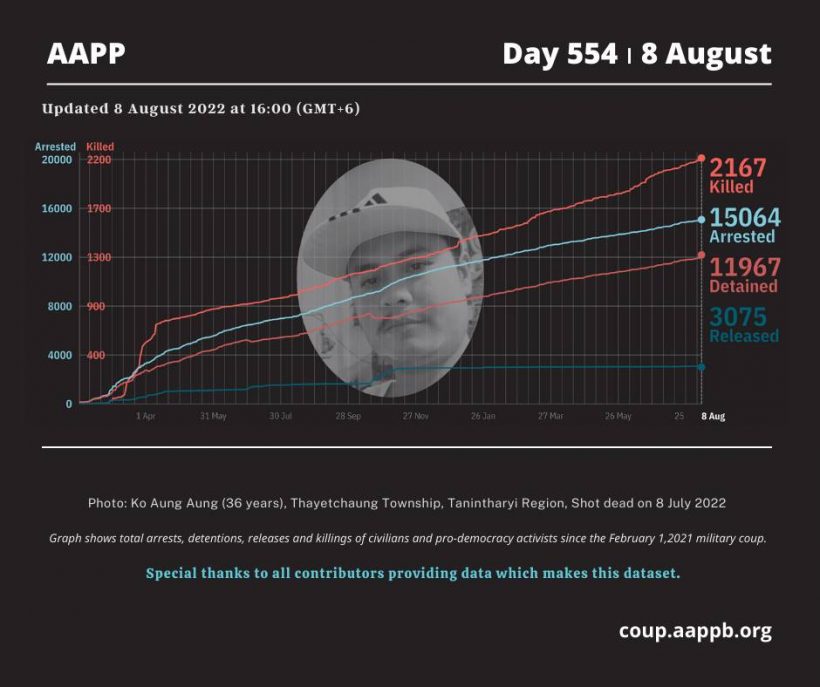 Since the February 1, 2021 military coup and the emergence of the Spring Revolution, a total of  (2167) people, pro-democracy activists and other civilians have been killed through military crackdown following pro-democracy movements. AAPP compiled and documented (9) fallen heroes today. These (9) fallen heroes, from Pekon Township in Shan State, Khin-U Township, Myinmu Township and Tabayin in Sagaing Region, were killed on previous days, but documented today.

On the afternoon of August 4, junta forces came to arrest a man in Insein Township. Since they cannot locate him, they took his father Hla Pe who is the NLD village and ward secretary, Hla Pe’s wife and daughter-in-law as hostages.

On August 5, junta forces from No.7 Operation Control Command, situated in Pekon Town, indiscriminately opened fire with heavy weaponry. One of the artillery shells landed in Sin Phyu Village, Pekon Township, and exploded; resulting in the death of 70-year old Bant on the spot. Bant was performing funeral rites for his dead wife when the artillery shell exploded.